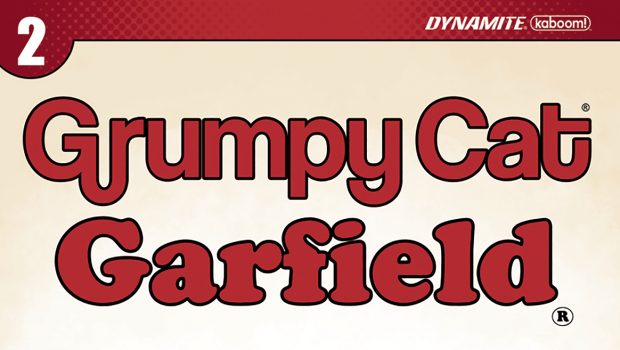 Summary: A "real life" Garfield vies for our hearts... but do too many cooks spoil the broth/Lasagna?

Garfield was one of the first comics that I read… partly because it’s what my mum used to get me, so other than The Phantom (and a bit of Judge Dredd and Dan Dare) Garfield was part of my first foray into comics. So it was with a bit of trepidation that I gave this comic a go. I’m well aware of Grumpy Cat as the actual cat that wears the scowl but how a one image wonder would translate to a comic was something I was curious about. On the one hand it kind of makes sense… our well established self centered grump Garfield and the internet ages grump Grumpy Cat… they share grumpiness in common how could it not work? 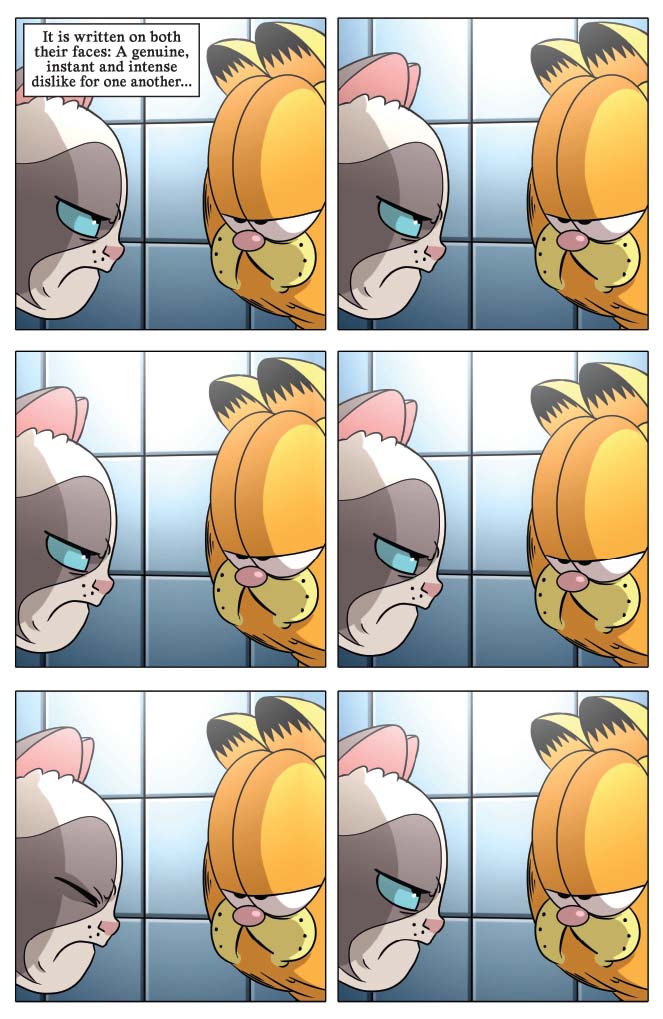 I don’t think there’s anything overly wrong with the writing but I think it’s certainly aimed at the younger audience. I can’t help but think it is heavily influenced by some of the cartoons that we get these days, the main one that comes to mind for some reason is Yokai Watch (but maybe that’s because my children seem to like it so I’ve been exposed to it more than I’d like). Garfield is still the self centered cat we know and love, kind of an ignorant lovable oaf that is often guided as much by his stomach as anything else. Then we have Grumpy Cat who seems to be Garfield but without the fun, there’s perhaps less of the self centered aspect of Garfield and more of a cynical edge instead. But the over arching story didn’t really grab me (though it is the middle of the story so perhaps without the former set up and or the pay off it doesn’t have quite the same charm). 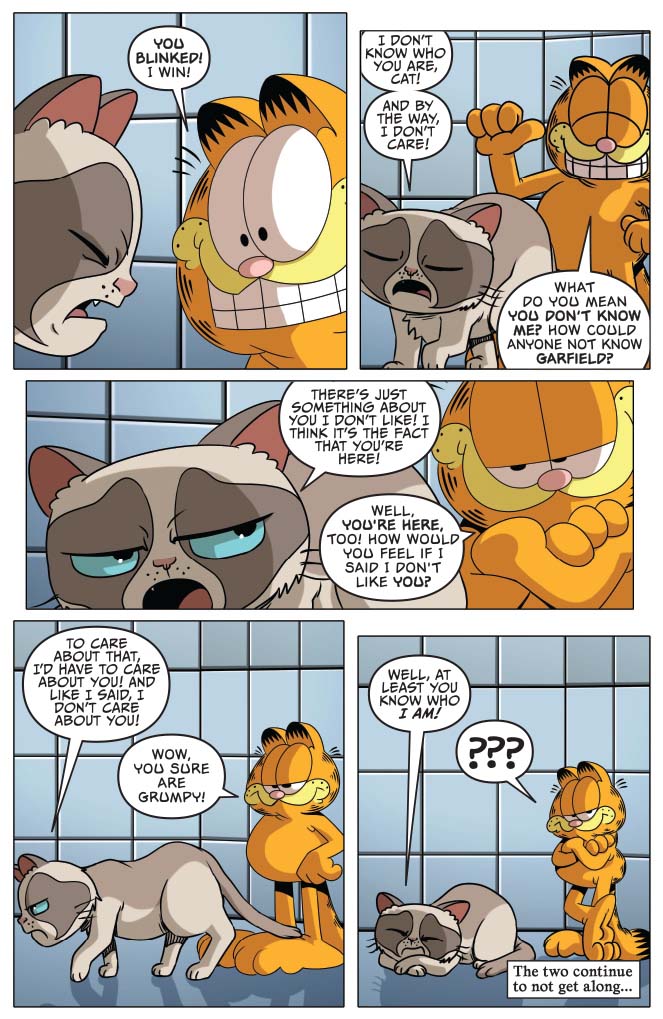 Garfield is definitely Garfield and Grumpy Cat looks suitably of the same style… but the humans don’t remind me of the classic Garfield comics at all… in fact I think the human characters are where the real Yokai Watch similarity comes in… there’s a certain style to them that feels out of place with the rest of the comic. There are no soft rounded tones of Jon, no similarity between the human aesthetic and the animals and I think that throws me off… I’m used to seeing the uniformity of the characters and if there was going to be a character that might buck that it would be Grumpy Cat who obviously is not from the Garfield universe. Having said that it’s possible the humans are similar in style to the Grumpy Cat comics style as I’m unfamiliar with that. 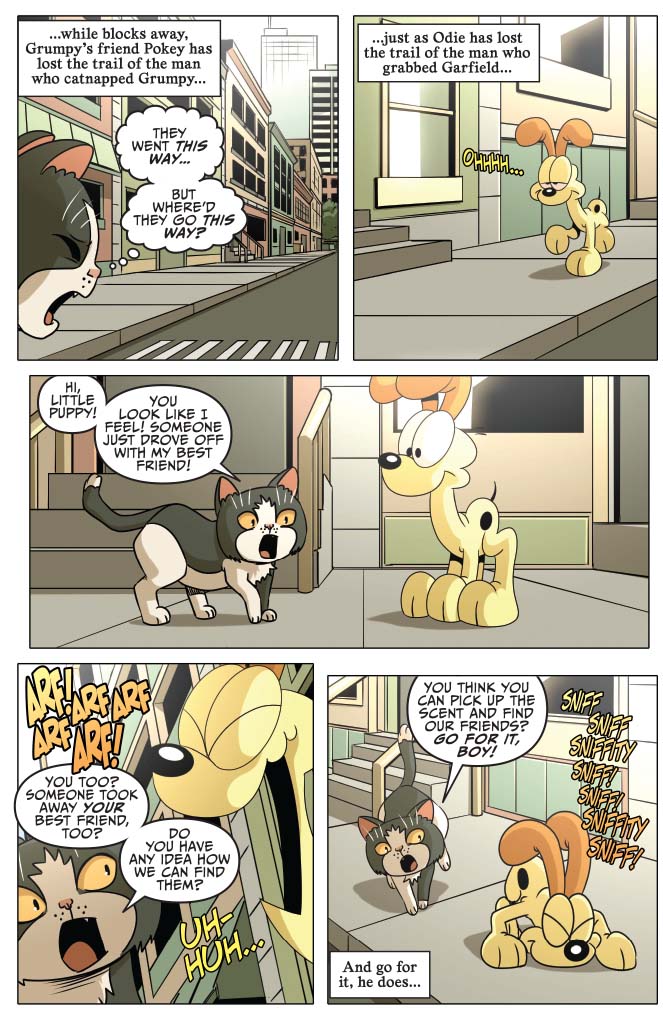 I’m not sold on this comic… I can imagine some people enjoying it, certainly the younger audience may well find it entertaining but I think I suffered from broken nostalgia… I was looking forward to a more familiar style of writing and art and it just wasn’t there. Well it was there in part but not in whole and I think that was what was really jarring for me. I wouldn’t recommend this but as I said I suspect the younger audience might like it… so maybe find a copy they can have a read of and decided if it’s their style and if so… go for it. 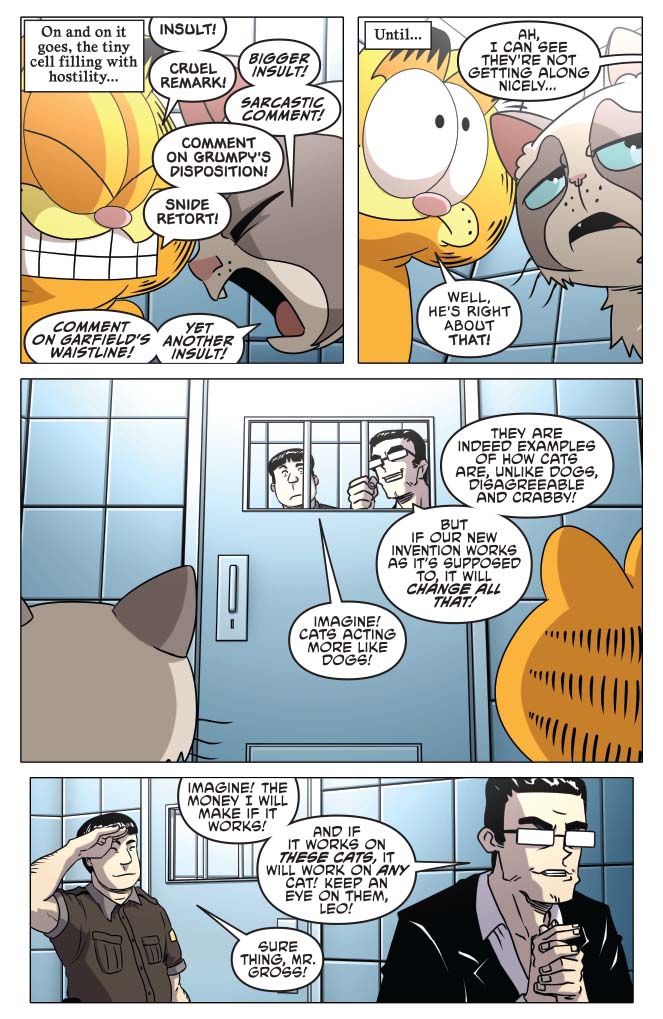