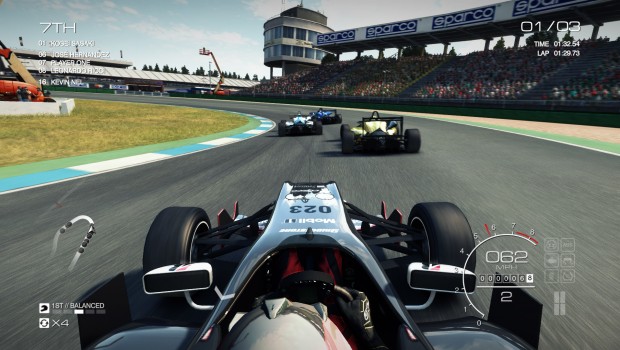 In the video, gameplay footage of GRID Autosport’s Open-Wheel racing discipline reveals purpose-built racing thoroughbreds going wheel-to-wheel in events where racing with precision at high speeds is essential for success. The video also features real-world racing drivers explaining the appeal of the discipline and how to succeed in cars which ‘take a bit of holding onto’, including British Racing Driver Club Rising Stars Jake Hill and Alice Powell, Danny Keirle from the Young Racing Driver Academy plus Arden International Motorsport’s GP3 racer Patric Neiderhauser who explains that at “almost 200 mph, side by side, [it’s ]the best feeling in the world – it’s like being on a rollercoaster but you’re driving yourself.”

In GRID Autosport’s Open-Wheel events, players must race smoothly and shave seconds off each and every lap in lightweight racing cars designed for a phenomenal power-to-weight ratio. Slipstreaming and picking the correct line around each corner is vital in a range of series typically featuring a single car class. Open-Wheel race cars are masterpieces of racing engineering where contact can quickly lead to the end of a driver’s race, so players must execute clean passes at high speed in order to win. Codemasters has consulted with drivers who have competed in Open-Wheel races to bring the experience of racing these cars alive authentically.

GRID Autosport features a range of cars and series in the Open-Wheel category. Players will get to test their skills in stunning examples of automotive excellence, including the Dallara F312, Ariel Atom 3.5, Caparo T1, Dallara Indycar and many more. Open-Wheel events and championships in career mode and online are set on the game’s beautifully recreated circuits, including Circuit Mont Tremblant, Indianapolis, Spa Francorchamps and many more.

GRID Autosport is set to release on June 26th across Australia & New Zealand for the Xbox 360 games and entertainment system from Microsoft, Windows PC and for the PLAYSTATION®3 computer entertainment system. A limited edition of GRID Autosport featuring exclusive additional content including the Mercedes-Benz SLS AMG Coupé Black Series, GRID Autosport Black Edition, is available to pre-order from select retailers. Fans can keep up with all the latest updates straight from the studio by speeding over to http://www.gridgame.com/ and www.facebook.com/gridgame or follow the team at www.twitter.com/gridgame.