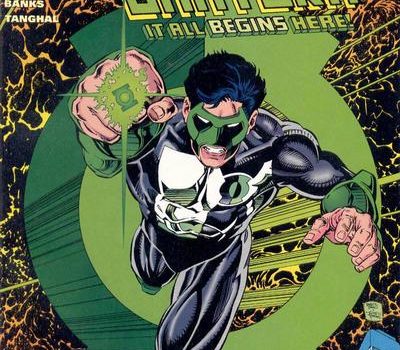 Summary: Kyle Rayner is an artist without a a path... until a trip to the bathroom turns him into a Green Lantern! No instructions, no help, and a certain Yellow skinned Purple wearing monster at his heels... Oh boy 0_0

Besides the weekly comics that come out, I’ve always had an interest to review some oldies but goodies, so at least once a week I’ll be posting a retro review. This week we’ve got Kyle Rayner’s debut! (PS – The retro reviews have spoilers…because they’ve been out for 10 + years.)

Story: Some poor guy named Kyle Rayner ends up being confronted by a small blue alien named Ganthet and given a power ring…the last power ring. No training manual. No help except from his on and off girlfriend…Oh boy.

Background: In 1994, sales of Green Lantern were sagging. After blowing up the corps in the 1980’s, DC brought it back with Hal Jordan once again at the fore. Superman had recently been killed in battle with Doomsday, Batman was replaced after his back was broken by Bane, and other DC properties had started to modernize their storylines.

The decision was made to have Green Lantern golden boy Hal Jordan go ape-shit, kill all of the corps members except for 3, and then turn into a homicidal maniac. One power ring would be left and given to a rookie who would then be forced to work stuff out on his own, kind of like The Greatest American Hero. Sales (despite outrage by the universe that Hal Jordan had been turned evil) shot through the roof and Kyle Rayner would later become the torchbearer for a reunited and reformed Green Lantern Corps.

Art: For the 1990’s, the art is pretty damn good. The way the green energy constructs are represented was the standard for the book during Kyle’s run: a lot of detail would appear thanks to Kyle being an artist. No more simple constructs like laser beams or swords. Kyle means business.

Commentary: For many people, Kyle Rayner was and is Green Lantern. I am one of those people. This run was the first Green Lantern series I had ever picked up and I thought owning a power ring would be the coolest thing ever. I remember when this volume hit 100 and Kyle and Hal teamed up (cue my salivating). For a first issue, I really do like how well Kyle is a well -meaning, but slacker idiot who doesn’t really care about responsibility. Kyle Rayner became my green lantern. Just like everybody has their incarnation of Doctor Who, everybody has their favorite Flash or Green Lantern. I grew up with Kyle and really got into comics just after he was introduced. I so wanted a power ring in 5thand 6thgrade.

As my very first Green Lantern issue, it was pretty bad ass during the heyday and it’s held up pretty well. ****1/2