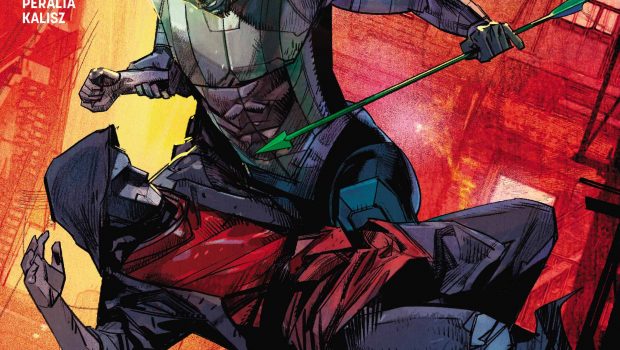 Summary: This issue delivers the verdict, and answers the question of whether or not Oliver’s friends can get to him in time!

Green Arrow #47 is the final issue in the Citizen’s Arrest story arc.  This arc has featured a masked villain known as Citizen, who has captured Oliver Queen and subjected him to a very public trial.  This issue delivers the verdict, and answers the question of whether or not Oliver’s friends can get to him in time! 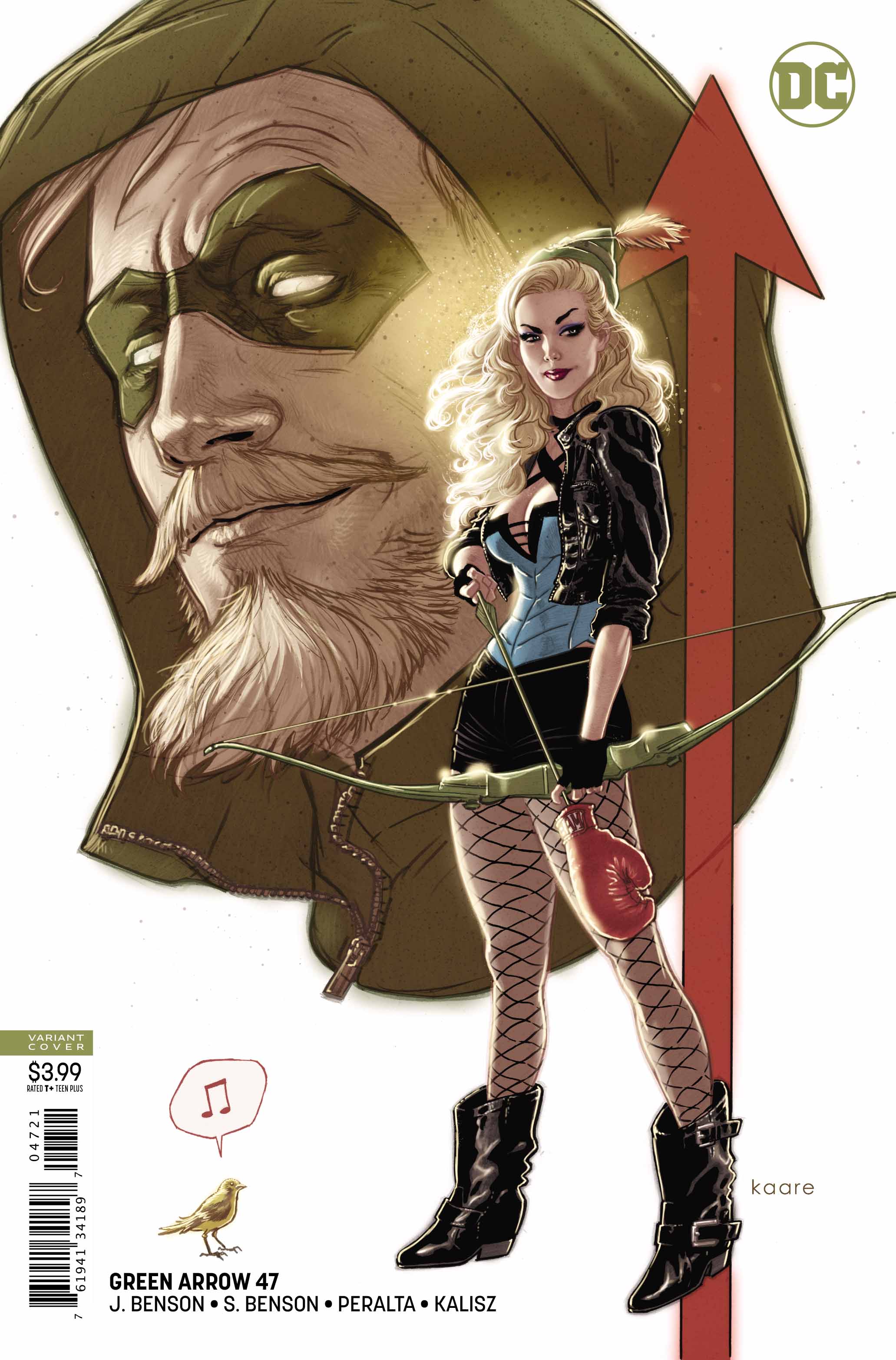 This issue features two covers: a standard and a variant.  The standard cover by Alex Maleev features Green Arrow and Citizen engaged in combat.  The pair are seemingly falling as they fight.  The colours of the Green Arrow are muted, and it feels like his colour is overwhelmed by the red background.  Citizen is just as muted, and the only thing that seems to stick out colour wise is a green arrow in the hands of Oliver.  The cover is completed by the tag line “Who is the Enemy of the People?”

The variant is by Kaare Andrews and features Black Canary and Green Arrow.  Black Canary is holding Oliver’s bow and wearing a Robin Hood style hat.  One of Oliver’s trick arrows (with the boxing glove) is knocked in the bow.  Green Arrow’s head is in the background, and he has a confident smile on his face. 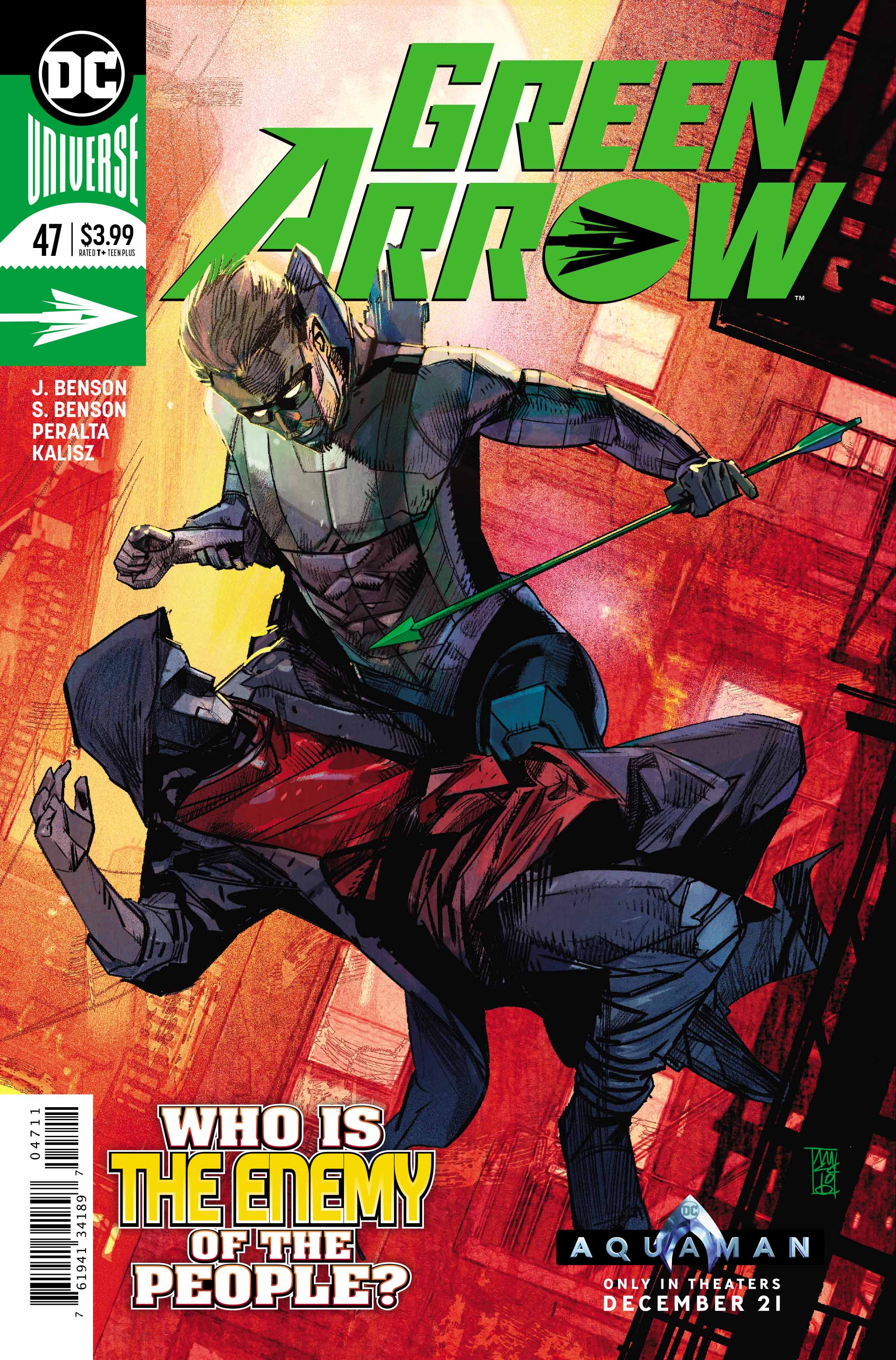 German Peralta handles the interior art on this issue, and John Kalisz handles the colours.  This is a pretty good-looking issue.  The art is rather dark throughout the book, with a creepy looking villain, and a hero that is worse for wear.  The combat sequences look pretty good.  The battle between Green Arrow and Citizen feels like a gritty street fight, and you can almost feel how hard the pair of them are striking each other.  The art does just what it’s supposed to, and that is support and enhance the story. 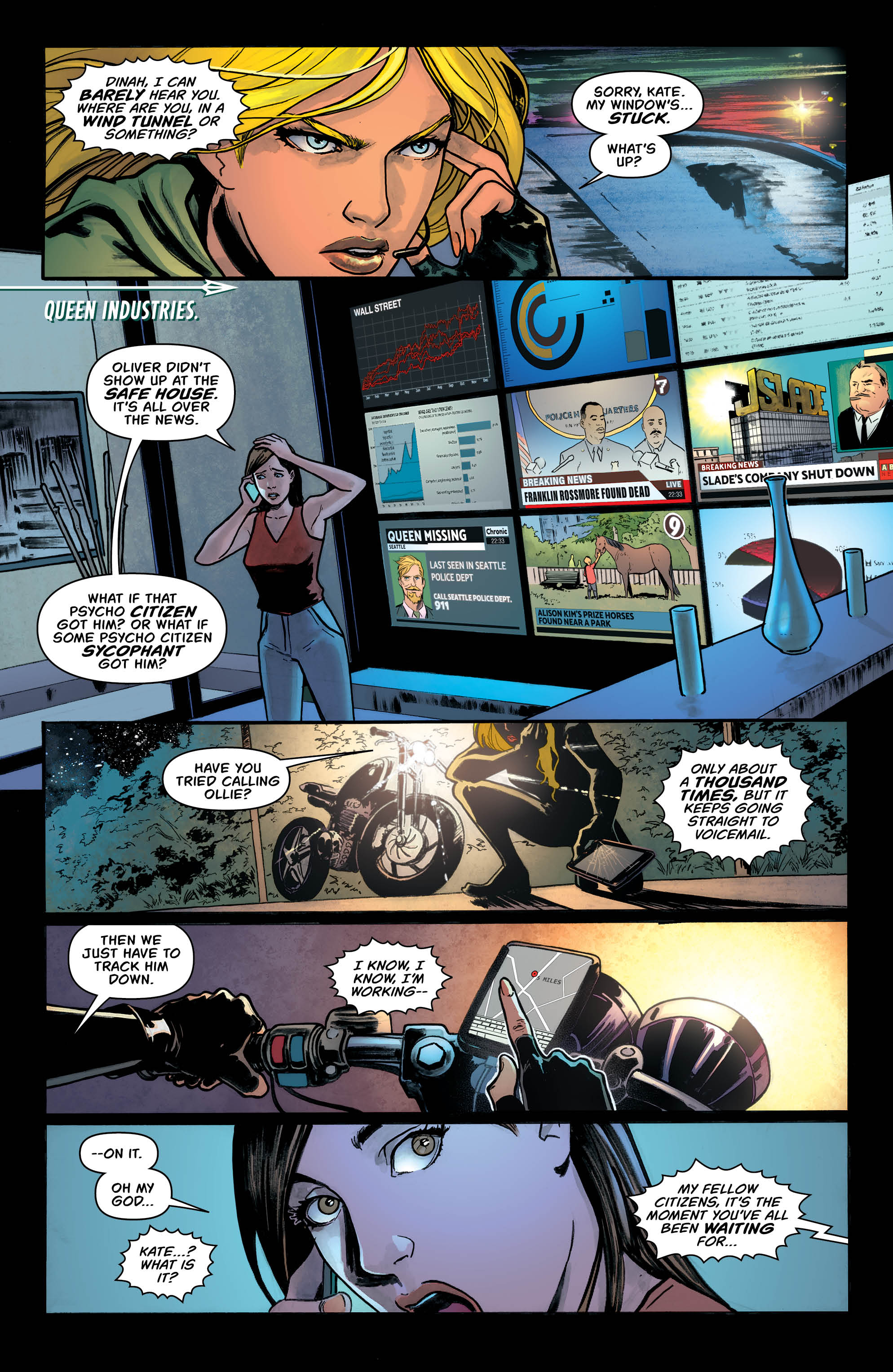 Julie Benson and Shawna Benson have written a strong conclusion to this story arc.  The issue begins with Oliver Queen strapped into an electric chair, with Citizen advising his audience that their votes will determine his fate.  Oliver’s friends are trying to track him down. Black Canary dressed as Green Arrow rushing to save the true Green Arrow from certain death.

Citizen comes across as a vigilante that has crossed the line, and even Oliver Queen remarks to himself that there isn’t a lot of difference between the two.  I enjoy how well Oliver is portrayed, as a hero that is unflinching in the face of potential doom.

The book also does a great job of touching on the relationship of Oliver and Dinah.  First, it is Dinah that is rushing to save his life, and we can see that Oliver sees her very much as an equal.  He even reaffirms this later in the issue.  The two have been friends, teammates, lovers and more throughout their history, and the close ties between the two are really well written and portrayed in this issue. 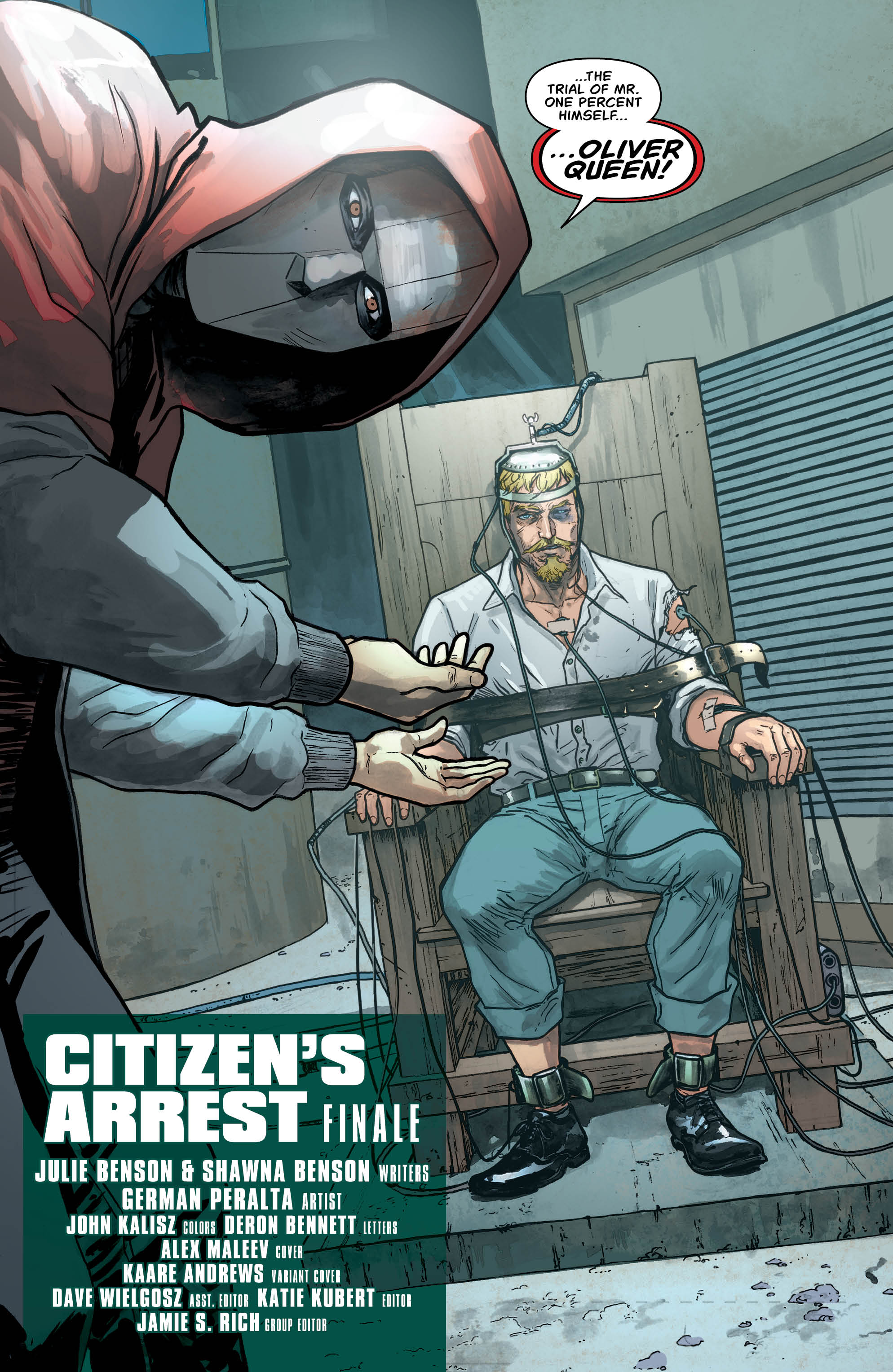 I enjoyed this book quite a bit.  Though the art and writing don’t stand out on their own, the pieces of this book come together very well and this book comes across as more than a sum of its parts.  The book feels a little like the Arrow series just in the way the setting is drawn, but is written as a lighter and more hopeful book.

Green Arrow #47 is an enjoyable book that is more than the sum of its parts. 4 out of 5 stars. 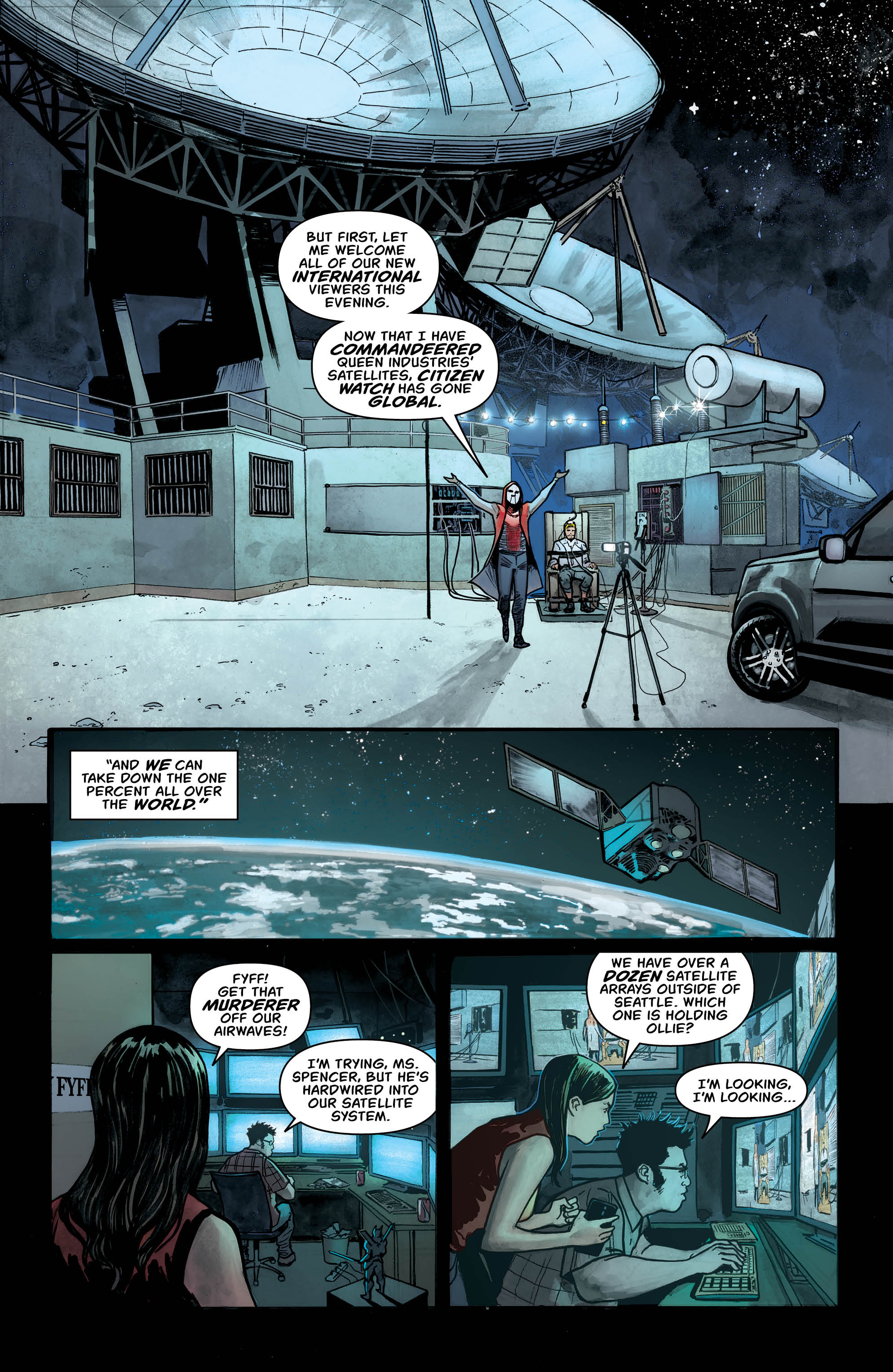