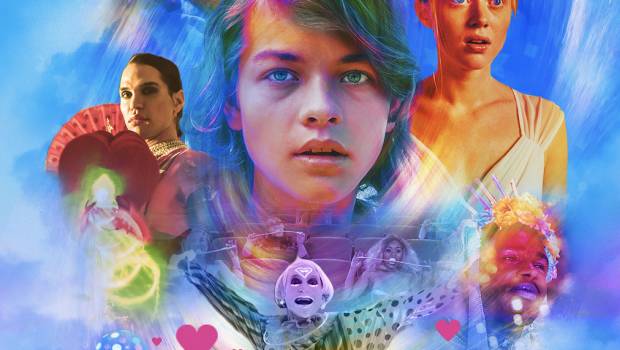 Trapped in a world of perpetual fun and inter-species love ruled by a universal Mother, a teenage boy crosses the forbidden frontier to save his childhood sweetheart and find out where he really came from, as an absurd election leads to chaos and violence.

In what can only be described as a not-too-distant future, where the inhabitants of an island are the experiment of a new world order that has structured the lives of the inhabitants so completely that their every freedom is controlled by extreme left-wing ideology and an omnipresent smart watch network.

A world where everyone is raised as non-binary, encouraged to love other species and actively discouraged from interpersonal relationships.

Policed by the ruthless stoic and uncompromising Optimists, represented by the gender non-conforming, flamboyant and semi-drag queen infantry that are ready to be deployed at the slightest indiscretion or personal offense.

In what can only be described, whether interpreted correctly or incorrectly is this film makes a satirical statement about the current mentality and direction the world is heading along the many threads of political correctness, sexual identity, the resurgence of socialism and communism in the west and the erosion of our humanity and values; and in such a comical “gays fight back” delivery.

This film holds a mirror up to the absurdity that exists even now and will absolutely exist if things are permitted to go unchecked. 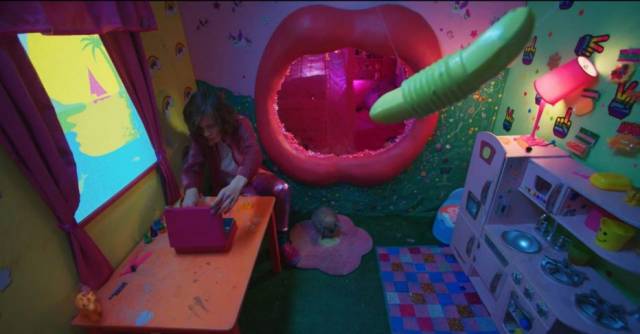 Ulysses home: With all of the compliance based imagery including the ‘take your pills’ motif.

Much deeper in this film is the true love story and the hope of humanity as seen through the eyes of Ulysses and Ugly-duck. Despite all odds, oppression and perpetual Optimist threat, they develop a connection and a bond that eclipses their preconceptions and Mothers programming to be together.

The subtext in their actions is that human nature cannot be suppressed and dominated totally, that love and values find a way and destructive, evil and oppressive regimes like this will always ultimately fail.

Arman Darbo (Ulysses) and Chloe Ray Warmoth (Ugly-Duck) are absolutely gorgeous together, with great on-screen chemistry taking the audience to the very top of suspense in their characters unknown yet anxious teenage romantic encounters.

Darbo absolutely personifies his character and delivers a captivating, enthralling and effortless performance. His style and timings bring such commonality and life to Ulysses and it is difficult not to instantly fall in love with this adorable and charming character. Watch out for Darbo, he is an actor worth following.

Greatland flirts with the absurd and extreme, visually and conceptually through costume, presentation and personalities of the characters. This helps to mask and blend the few lower budget visual effects that are in this film in such a way that diminishes any would-be criticism of these effects and gives them a clear pass, much in the way that it did in the Austin Powers movies.

For some, first impressions from the trailer may lead to confusion, rejection or dismissal of this film, but rest assured Greatland is actually a gem and worthy of cult-classic status. It is exceptionally well written, presented and performed by the cast and an exceptional effort of what should be described as grass-roots filmography.

Read more about Greatland on imdb

Summary: Greatland is exceptionally well written, presented and performed by the cast and an great example of grass-roots filmography. A satirical film aimed at intelligent free thinkers!