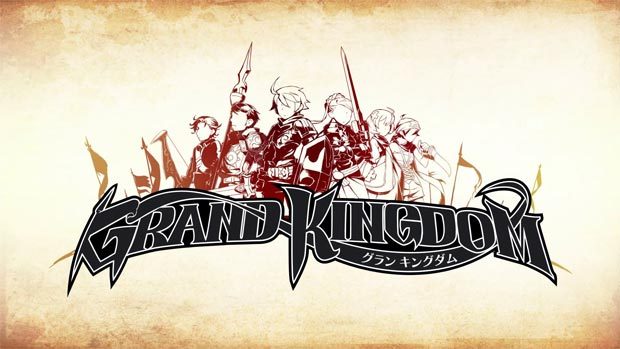 Summary: Turn-based role-playing mixed with real-time combos and complex battle systems from a variety of inspirations equals one unique SRPG.

Grand Kingdom is an all-new tactical RPG from Spike Chunsoft offering a hotch-potch of ideas and gameplay mechanics drawing from the genre’s best to form a not-so-entirely-perfect amalgamation – but one which is still fun to play and oozing with style only a Japanese developer could pull off. 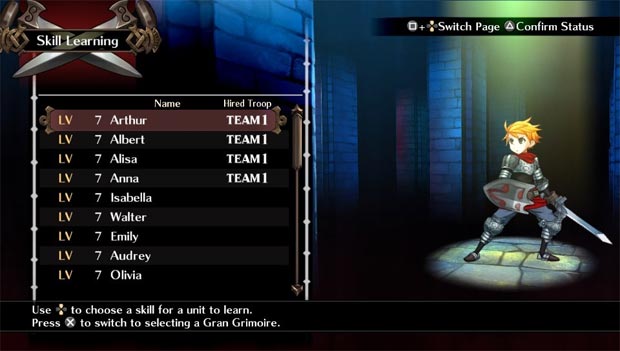 Players assume the role of a mercenary company’s unseen leader (similar to the Commander from the XCOM series) who guides their rag-tag assortment to fame by working with a guild in Ragnail, taking contracts with one of four factions vying for dominance of the land. This simple yet entertaining story makes up the 12 story chapters of the main campaign, complete with stellar voice-acting marred somewhat by stereotypical fantasy drama. While not ground-breaking or particularly memorable in many ways, it’s still very fun and helps players learn the ropes of what is an impressively deep game.

The meat of the game is in its 36 additional story chapters added in the Western release (previously DLC) and the robust online features which has you playing War with other players from around the world in a race to have the best mercenary company. The lore here is genuinely interesting, even if most of the story is told in text outside of the main campaign, where most of the voice-over work was done for. The content on offer is substantial, and for any player willing to put the time in, it’s definitely value for money you don’t get in many other SRPGs. 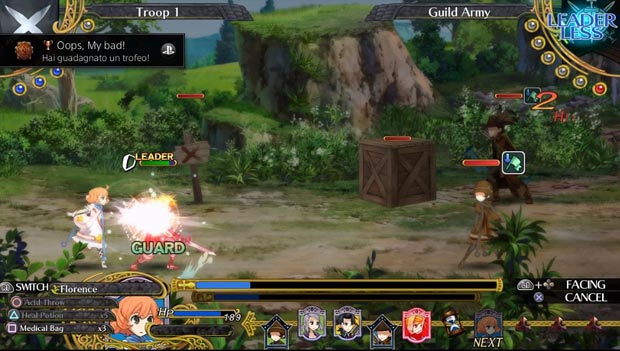 After a short tutorial period, you can get started and hire and create your first batch of recruits, choosing their class, initial stats, appearance and voice. There is around three basic class-types forming the classic rock-paper-scissors mechanic governing SRPGs, with heaps to unlock over the course of the game and many specialist classes for more unique unit types. The character customisation options available to differentiate your party from the others you’ll find online sadly aren’t as robust as I hoped they would be, but there’s still enough choice here to help your party stand-out.

Grand Kingdom shakes up the formula of Japanese SRPGs and world maps with the use of a board-game style map for exploration and missions. Every time your party heads out into the battlefield to take on an opponent, explore for treasure or achieve an objective, you need to navigate the game board like a chess-piece and within a certain amount of ‘turns’ get to your destination or goal and claim victory. Geographical obstacles, traps, enemies, treasure chests, secrets and more are represented on the board with different icons; it’s up to you how you see fit to deal with them. All of these activities within the mission game board consumes a set number of actions or TP (if using skills) which subtract from your overall alloted amount of turns; exceed this number and you fail the mission, so much of your strategy needs to incorporate good old risk vs reward, and timeliness versus prestige. 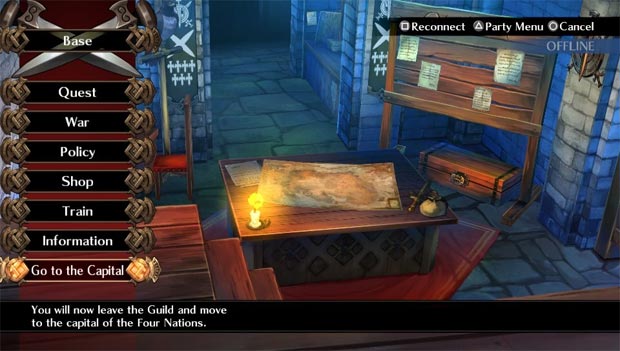 With enemies also moving across the board each time you do, you can choose to approach them head-on with your party, risk taking a detour for loot or extra rewards, or avoid them with careful timing or the use of special skills or items. When your party encounters an enemy, the game switches perspective to its primary mode of play: turn-based battles mixed with real-time actions where you can input commands and directly control your party’s attacks in a combo-style fashion.

The battlefield is set on a 2D backdrop broken up into three planes. Your party starts on one-side of the battlefield, the enemy party on the other; from here  you navigate your units across any of the three planes to attack the enemy until your turn ends. Turns are shown on the bottom of the screen, with each unit’s turn in the order of things governed by their speed. All units also have a movement bar which limits how much they can do in their current turn. 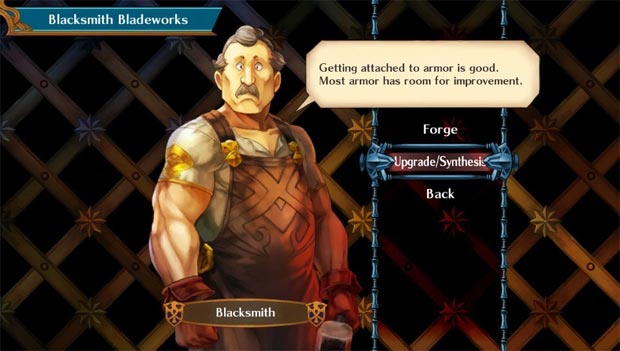 Every party member’s class dictates the attacks, skills (offensive and support), and weapons they have access to on the battlefield and the way you control them when the real-time portions come into play. For example, soldiers have a handy sword and shield which controls like a basic beat-’em up upon attacking the enemy – just mash the assigned attack button to lower the enemy’s health bar. Meanwhile, mages have projectile healing potions you can throw onto your soldier from afar and archers have bow and arrows they can shoot from the backlines – both actions and their success are dependent on pressing the assigned button at the right time as per the indicator on-screen.

Mixing and matching classes and their attack styles is crucial to success, but so is learning how to properly control their abilities when the real-time portions kick in. Mashing the circle button is adequate to kill enemies early on with the soldier, but assigning the right set of melee moves in the right order and timing your swings perfectly can mean the difference between a clumsy set of swings and a satisfying, game-winning combo-streak (tallied on the right-hand side of the screen). 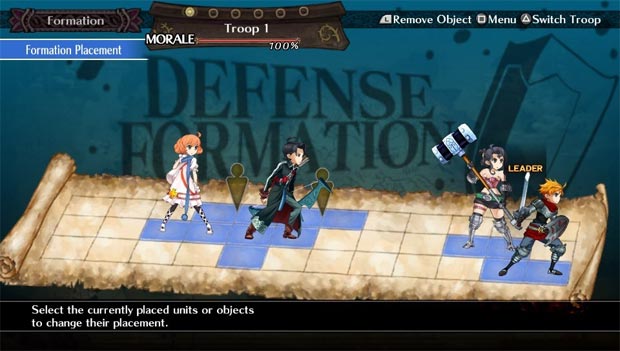 Party positioning is also key because friendly fire exists, and your units need to attack and move in a way that doesn’t endanger comrades. Even if your mage’s projectile health potion reaches your soldier, for example, the enemy right next to them might also get healed if they are too close and your aim is off. Line of sight, unit proximity and the like aren’t usually factors accounted for in other SRPGs and for me it helped make my victories feel all the more well-earned when I had to make careful decisions for my troops instead of rushing in and bashing everything moving. Overall, it’s a satisfying mix of turn-based tactical decision-making and direct gameplay involvement in the outcome of the fight.

Grand Kingdom has a slick UI and stellar tutorial system which pretty much covers every gameplay mechanic, tactic and query a player needs to know to succeed better than this review can summarise, but its extremely in-depth combat system still takes plenty of investment to understand completely. It intimidated but impressed me with its level of complexity, and its depth will appeal to certain types of gamers who love options when it comes to tactical role-playing – good thing the in-game guide is so comprehensive. 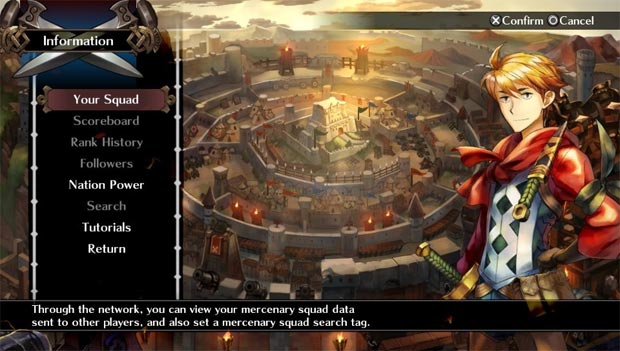 The online part of Grand Kingdom mentioned earlier is a substantial part of the package. Your mercenary party can fight wars on behalf of your chosen faction to control territory and win the largest percentage of the map. While you don’t play against other players over the Web in real-time (their party members are CPU controlled) you can choose to directly control your party when fighting opponents or dispatch troops to deal with them without your input. The way you customise your party’s tactics and skills will determine how your own stack up against others when you dispatch them to fight, and every time you log back in, your overall standing and rewards are updated. It’s a very involved system which requires investment to truly get the most of it, but it’s a core part of the experience.

The aesthetic and setting is reminiscent of games like Dragon’s Crown, with a distinct Japanese flavour on medieval high-fantasy. Expect plenty of staples like dragons, knights, mages, and maidens, all coming together in a gorgeously colourful 2D hand-drawn art-style. It’s all not quite to the same exaggerated level of quirkiness as what Vanillaware’s head artist George Kamitani produced in Grand Kingdom’s obvious inspiration, but the overall presentation is definitely eye-catching and one of the stronger parts of the package. The soundtrack, too, is excellent and the voice-acting great – always good to see from a NIS America localisation. Japanophiles can, however, enjoy the original Japanese audio track if they want by selecting it in the options menus. 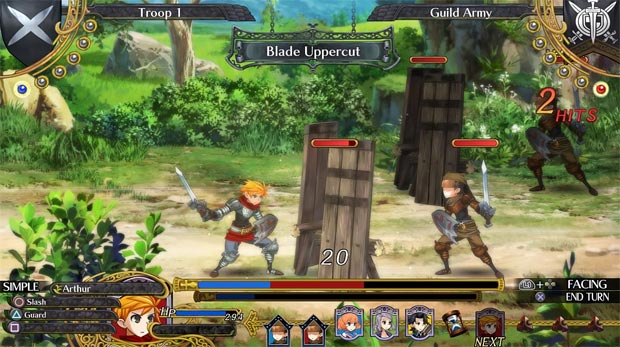 Grand Kingdom is a unique and entertaining new take on the tactical SRPG genre which may be a little bit too hardcore for some players, with an online component forming a large part of the experience which requires heavy investment to learn all of its complex gameplay systems. If you love strategy RPGs from Japan and enjoy quirky 2D high-fantasy art-styles, it’s definitely a recommendation, but for everyone else interested but not too experienced in tactical gameplay, be prepared to have to learn a lot before the fun kicks in.