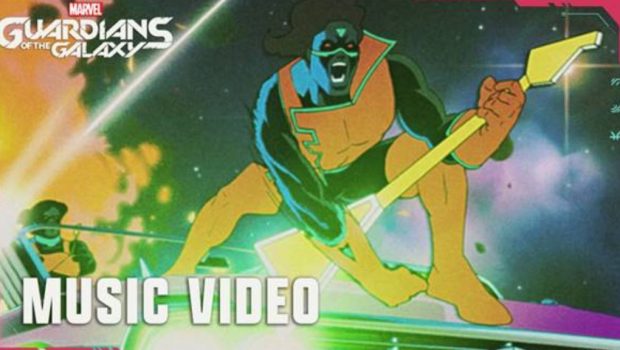 Eidos-Montréal have debuted a new, unapologetically ‘80s music video to celebrate the official release of “Zero to Hero,” the second face-melting single from Marvel’s Guardians of the Galaxy’s Star-Lord Band. Both of the group’s singles are also featured on the official Marvel’s Guardians of the Galaxy Original Video Game Playlist, which has also been released today.

Inspired by classic ‘80s cartoons, the animated music video amps up the nostalgia factor to 11 and gives viewers a taste of why superfan Peter Quill was inspired to adopt the “Star-Lord” moniker in the game’s universe. But that’s not all! Eidos-Montréal has also released a vintage VHS recording of the Star-Lord Band performing the single on stage in all their long-haired glory, and combined it with the animated music video to create a headbangin’ extended cut.

Including the Star-Lord Band’s “Zero to Hero” and “Space Riders with No Names,” the Marvel’s Guardians of the Galaxy Original Video Game Playlist features 30 iconic licensed tracks from legendary artists such as Mötley Crüe, Bonnie Tyler, Billy Idol, Pat Benetar, Def Leppard, BLONDIE, and many more. All songs on the playlist will also be featured in the game itself, with an optional toggle for players who wish to replace them with stream-safe alternatives as needed.

Created specifically for Marvel’s Guardians of the Galaxy, the Star-Lord Band full-length album will be released standalone alongside the game when it launches on October 26.