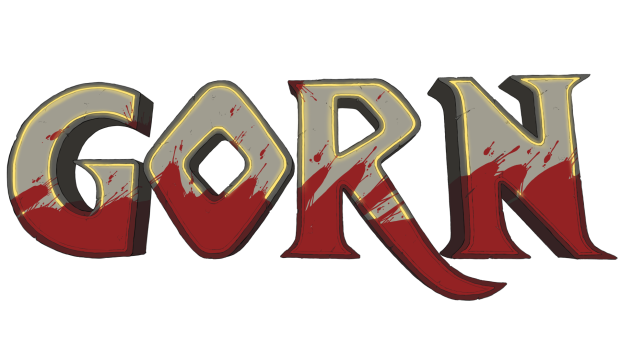 Gorn needs to come with a warning: May cause damage to yourself, your room, your furnishings or your controllers!

Basically Gorn is a Gladiatorial combat simulator. It starts with a single person in the coliseum with you, the emperor commands you to fight and your off… may the best man win. But it gets much harder and much busier than that. But before you can get your Russel Crowe kicks you have to set your room up. Gorn is the first game I played with my HTC Vive that required room scale… to do so I had to “cheat” my play space a little by “tracing” over the top of some shelves and other items around the room. 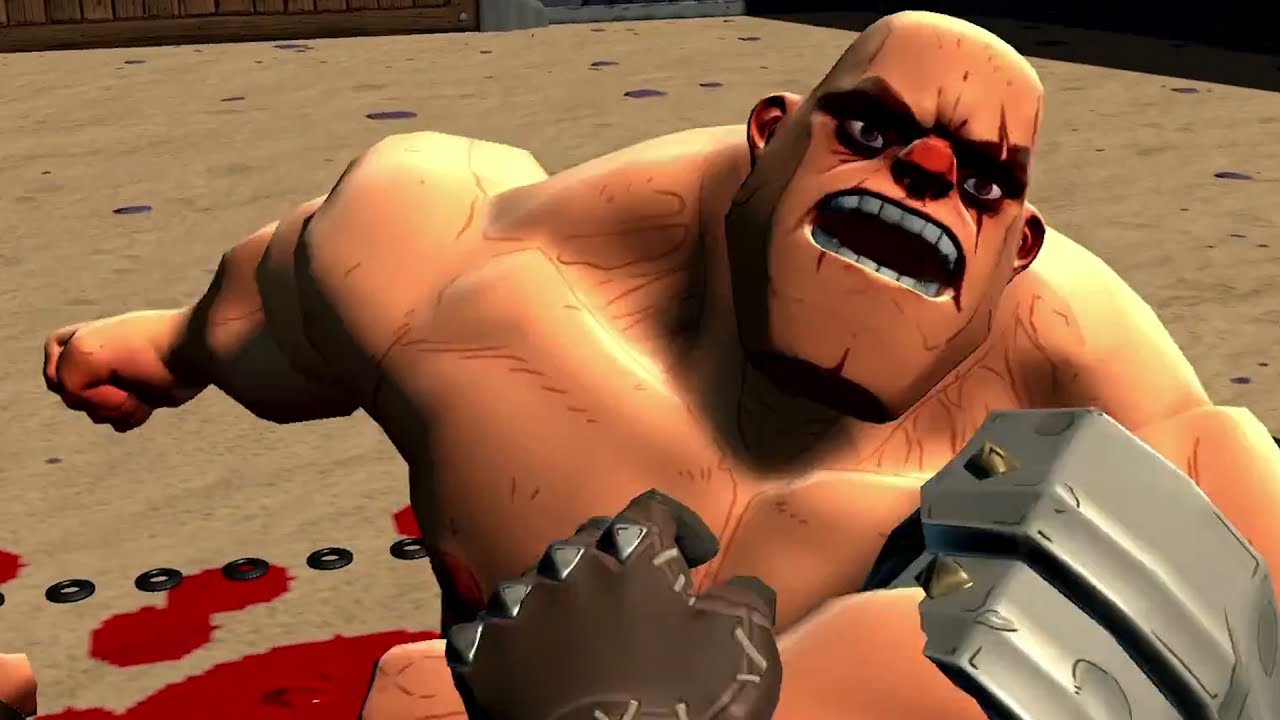 The first time I had my room scale set up, I started the game and found myself down the end of a room, at the far end was a door with a handle I needed to pull to enter the arena… I stretched out my virtual hand and walked as far as my room scale would let me but it was just out of reach. Frustrated I exited… reconfigured the room and jumped back in only to find that had I read a note on the wall I would have seen that I could actually use the Vive wand to drag the room towards me… thereby bringing the door within my play space and allowing me to jump into the arena to fight. This is a brilliant idea and I wish more games used it… not everyone has an open clear space to experience VR in… some, like myself, have to make do with what we have… we can do quite well with our space but where we are in reality and where we end up starting in VR can cause problems for playing.

As mentioned, you start the game a room that precedes the battle arena… chanting fills your ears before you make your way through to your destiny. When you first enter the arena a figure commands you to show respect and raise your hands… as you look up you see where the voice is coming from. Before long your opponent is wobbling towards you… I say wobbling because the characters are cartoonish and as such they feature an impossibly massive top with muscles rippling everywhere… all supported by tiny legs (obviously they skip leg day) and they move towards you much like you’d expect a marionette to. This is where you need to be careful too… they may throw the first punch (weapons come later) and blur your vision with a smack to the side of the head… fortunately you can duck and dive out of the way… so get close enough and show them whose boss. 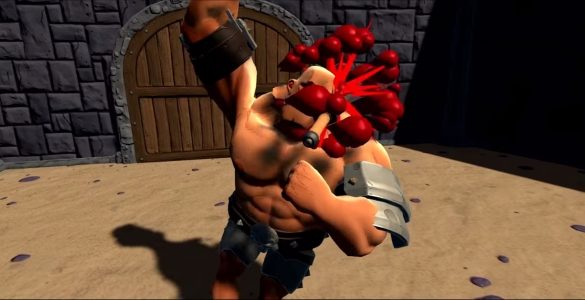 A win brings you coins and the chance to live another day… that next day just brings more battle though and as you progress the odds get stacked more and more against you… sure you are given a mace… but you soon need to dispatch two attackers rather than just the one… then three, four and so on. It’s a lot of fun but the start to this article isn’t me just being a smart alec. Gorn is the game that caused me to make a big ol’ mark on my wall and my controller now has  a decent scuff mark on (fortunately it’s just a scuff and it still works). So make sure you have plenty of space around you before you play because you will get so caught up in the fun of ducking and weaving, swinging your weapons that you won’t know where you are in real space (it may even help to have a “spotter” on hand to keep you from doing yourself or your room damage). 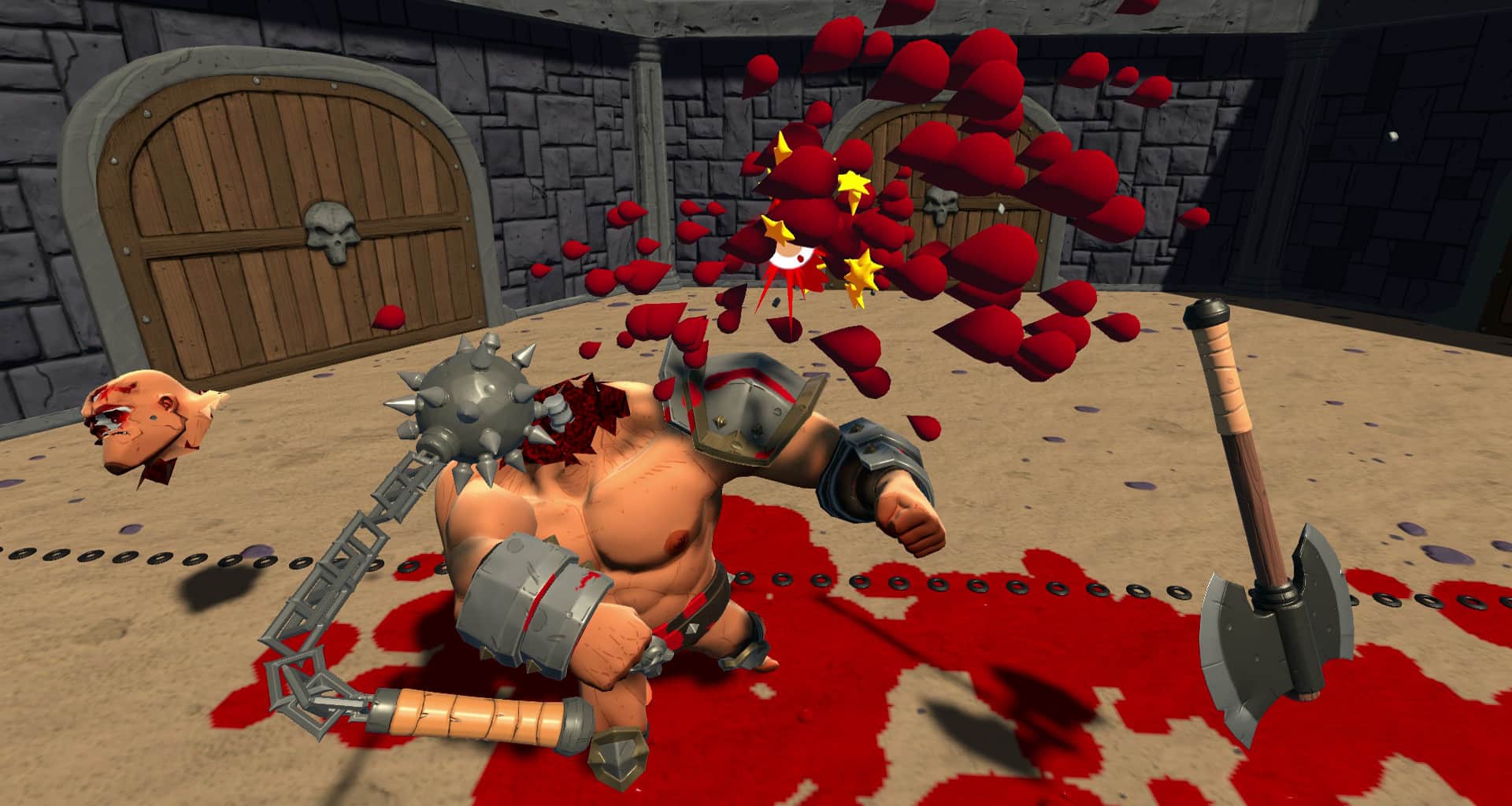 Would I recommend Gorn… absolutely… but don’t blame me for any damages!… seriously… be very careful!