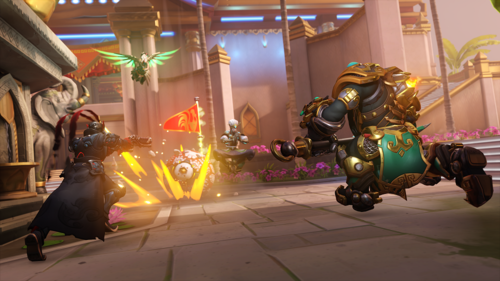 The Year of the Rabbit seasonal event begins 18 January for Overwatch 2 and brings new skins to collect, festive maps celebrating the holiday, and the return of fan-favourite fun arcade brawls. You’ll also earn free rewards when you log-in, play, and watch your favourite content creators on Twitch. 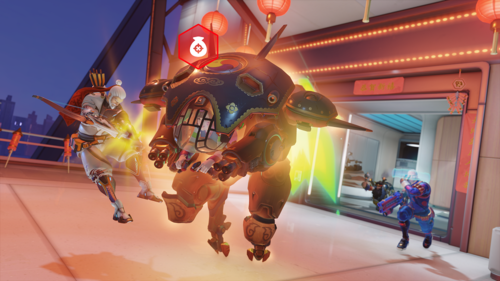 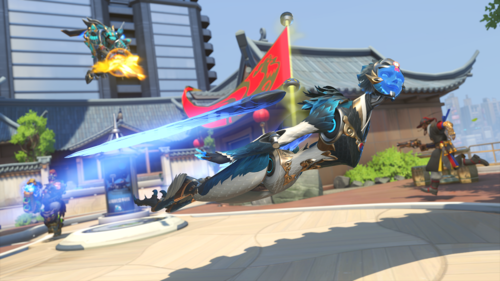 Head on over to Lijang Tower to see fireworks light up the night sky and jump into arcade brawls as a part of our Lunar New Year event including Capture the Flag, Capture the Flag Blitz, and Bounty Hunter.

Capture the Flag is a frantic and fun game mode where you must capture your opponent’s flag while ensuring they don’t do the same.

You can participate in the 2023 season for Competitive Capture – The-Flag which has already started. Coordinate with your team and play for a top position on the leader board and earn Competitive Points to unlock golden weapons for your favourite heroes.

Capture the Flag Blitz is a fast-paced version of the Capture the Flag arcade brawl. Flag bases are placed near the centre of the map. Expect to make quick decisions and fast plays to ensure your team comes out on top!

Finally, you can play the intense free-for-all brawl, Bounty Hunter, throughout the Year of the Rabbit seasonal event. Whoever can secure a kill on an opponent first will have a bounty placed on them, and while they are the bounty, they earn even more points when they get additional kills. Hunt down the bounty to get it transferred to you, but watch out— you can be seen even through walls and floors if there’s a bounty on your head! Can you survive as the centre of attention in this intense game mode?

Earn unique rewards when you log in and play

You can also earn new rewards during the Year of the Rabbit event, including the 2023 Year of the Rabbit Player Icon just for logging in! There are new event challenges, rewarding bonus cosmetics, and Battle Pass XP when you play any of our Lunar New Year brawls. Complete four of the available event challenges to earn the Kkachi Echo Legendary Skin!

Celebrate the Year of the Rabbit with your favourite content creators streaming live on Twitch to earn a victory pose and Legendary skin for Moira from our Lunar New Year collection.

Watch for two hours with your linked Battle.net account to earn The Lion Roars Victory Pose for Moira, then watch for another four hours and earn the Masked Dancer Legendary skin for Moira.

Year of the Rabbit caps off our second season for Overwatch 2. Season 3 is going to be packed with new content, and we can’t wait to show you. Wishing you luck, peace, and a happy Lunar New Year!