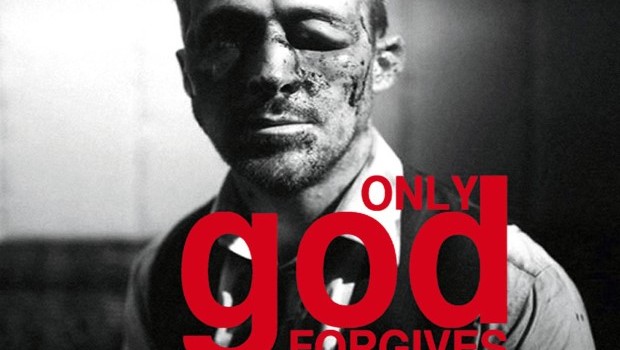 Summary: Nicholas Winding Refn’s film is a languid, gorgeously shot homage to minimalist cinema that, despite its polarising critical reception, will find an appreciative audience in the years to come who can fully appreciate this uncompromising realisation of Refn’s vision.

It seems that lately I’ve been kind of out of step with the critical consensus on certain films; I really enjoyed both A Field in England and Rob Zombie’s latest effort The Lords of Salem, both films that have garnered middling reviews due to their divisiveness amongst critics. Only God Forgives, the latest film from Nicholas Winding Refn, gained both a standing ovation and a chorus of boos at its premiere in Cannes and has received an extremely polarising critical response, predominately due to its slow pace and over-stylised direction. 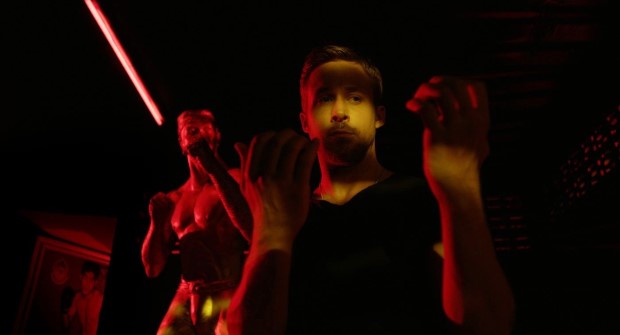 Only God Forgives introduces us to Julian (Ryan Gosling), a stoic operator of a Bangkok boxing gym that serves as a front for a drug operation he runs with his brother Billy (Tom Burke). After Billy goes out for a night on the town and ends up murdering an underage prostitute, we’re then introduced to Chang (Vithaya Pansringarm), a sadistic police lieutenant who Refn refers to as both the film’s hero and villain, as God in the vengeful Old Testament sense as well as the Devil, who is called out to the scene of the murder and offers the mourning father of the girl the opportunity to do as he will with Billy, with the father electing to administer brutal justice, leading to Billy’s death in an eye for an eye scenario.

Seeking vengeance for his brother’s death, Julian’s mother Crystal (A mesmerising performance by Kristin Scott Thomas) fly’s into Bangkok and demands that Julian handle the situation, exerting her influence as the true head of the drug empire and manipulating Julian to do her bidding despite his conflicted sentiments about his brother’s moral fibre; there’s also an oedipal element to their relationship that is further expanded upon as the film progresses, demonstrating that Crystal has long cajoled Julian to do things at her behest and going some way to explain the apparent self loathing evident in Gosling’s performance. When Julian discovers the morally repugnant act that is the reason for his brother’s death he refuses to follow through, causing his mother to take things into her own hands and leading to a full scale war between her family and Chang and his almost supernatural resources. 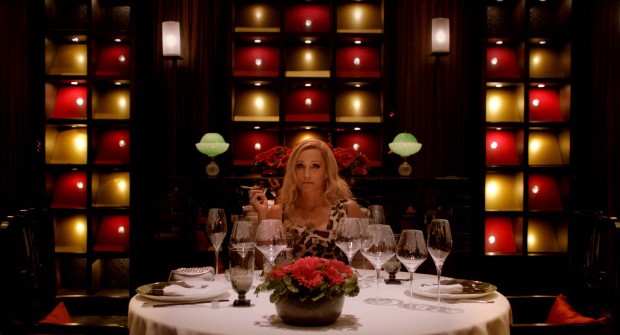 Only God Forgives isn’t an easy film to sit through: It’s heavily steeped in metaphor and allegorical references and the lethargic pace and dreamlike quality of the film won’t be to everyone’s liking. After the massive success of Refn’s previous collaboration with Gosling, the hyper stylised Drive, fan expectations were high for this film, with many expecting it to be an extension of the aforementioned film. But, as Refn so eloquently puts it, if Drive is supposed to elicit the feeling of having snorted a stack of good Cocaine, with its glossy 80’s inspired aesthetic, then Only God Forgives is supposed to replicate the creeping sensation of an acid trip, resulting in a slow, meditative exercise that shares more in common with his earlier films, particularly Valhalla Rising.

Only God Forgives depicts a gaudy, neon soaked rendition of Thailand that is absolutely beautiful to look at; Each of the main family members are assigned a recurring motif of colour (Billy’s is blue, Crystal’s is green and Julian’s is red) and the gorgeous cinematography and lighting serves to saturate the screen to the point where their scenes are dominate almost solely by this rich colour filter, particularly the red. The main plot of the film sees Julian as almost an incidental character in his own story, a man tormented by his violent past who finds himself the pawn between two conflicting gods as he struggles for the redemption of his soul. As a protagonist Julian is an unreliable narrator as he often experiences prescient visions and fantasies play out on screen as they do in his head before we see the real event; he’s plagued by guilt and often imagines receiving the retribution that he feels he is deserving of. 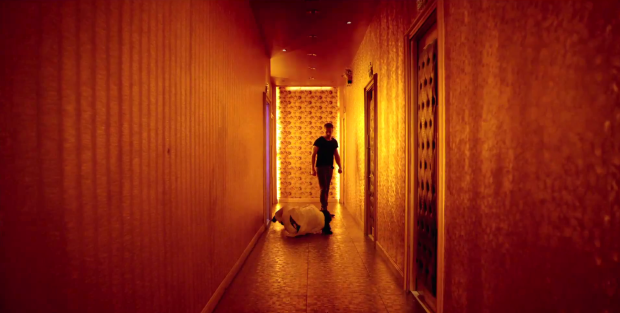 Only God Forgives is an incredibly nihilistic exploration of guilt and control, with some really uncomfortable moment coming from the interactions between Julian and Crystal and the sudden, explosive moments of graphic violence that punctuate the film. The film maintains a steady ponderous pace that accentuates the ominous dreamlike quality of the direction, with multiple slow tracking shots and oppressive silence giving the film an intensely unnerving atmosphere. The direction is further complimented by an astounding synth heavy score by Cliff Martinez, who also scored Drive; unlike the previous film, however, there is no comfort to be found in this austere soundtrack, with the ominous pulsing beat slowly building to a screeching crescendo.

An interesting point of the film is that Gosling and his family are really the villains of the piece – Crystal and her cohorts admittedly more so than the reluctant Julian – when contrasted against the “antagonist” Chang; they’re almost an indictment against the trope of white colonialists coming in and polluting the local culture, with their drug trafficking, ignorant sense of entitlement and superiority due to their nationality and ill considered attempt to seek justice against Chang on his own turf. The world Refn shows us is devoid of morality and rife with exploitation from every avenue, whether it’s Julian being manipulated by his mother to the young prostitutes being pimped out by their father to the locals paid off to do Crystal’s dirty work – Only God Forgives paints a pretty bleak portrait of humanity. 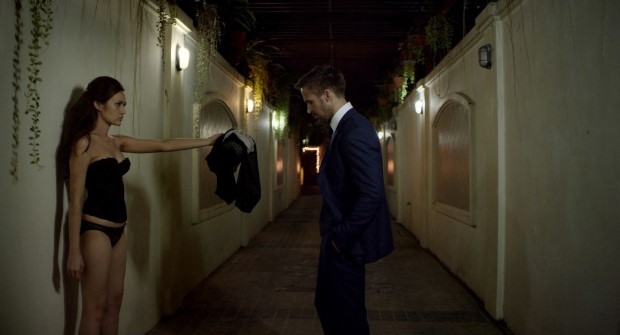 Similar to Drive there’s very little dialogue in the film, with Refn preferring to take the route of presenting a visual story; Gosling only has 17 lines in the entire film and Chang has maybe even less. Instead exposition is conveyed though a look, a blank reaction to horror being inflicted, a palpably uncomfortable dinner that reveals more about Julian’s uneasy relationship with his mother than pages of dialogue ever could. The scenes with Chang singing Karaoke show a gentler side to an avenging angel who inflicts cruel and righteous justice and offer a lighter, almost poetic juxtaposition to the acts of extreme violence depicted on screen.

Icon’s transfer is impeccable, with top marks in both the visual and audio departments. A film with such a unique directorial style as this deserves an unblemished picture to fully appreciate the bold use of colours and shadow and the disc shows no sign of compromise in regards to image balancing and crisp detail of the image. The sound production is handled extremely well and Martinez’s score sounds stunning when displayed in 5.1 digital surround. 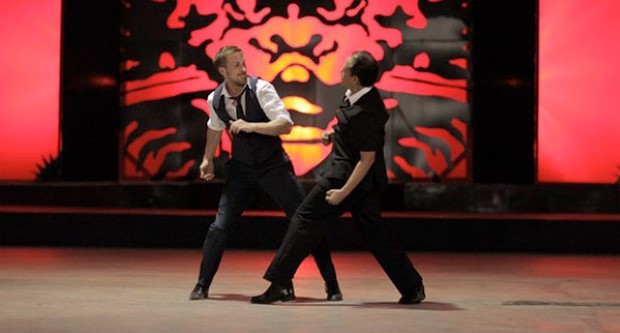 The special features include some behind the scenes footage of Refn working with his actors to work out the logistics behind the drug deal that takes place during the film’s opening fight scene, Billy picking up the young prostitute who inadvertently serves as the impetus for the carnage that follows, the noodle bar shoot out and more. Watching Refn at work and his meticulous attention to seemingly minor details serves to highlight his intent to direct the film as a fully realised reflection of the way he originally envisioned it during the writing process and makes for fascinating viewing for anyone interested in the mechanics of filmmaking. Also included is a commentary with Damon Wise and Refn where Refn further expands upon the Old Testament allusions present in the film, as well as some interesting anecdotes behind the evolution of the film and the themes and motifs explored, and an interview with Refn where he explains the inspiration behind the concept and the reasoning behind the mainly visual form of storytelling utilised throughout the film. 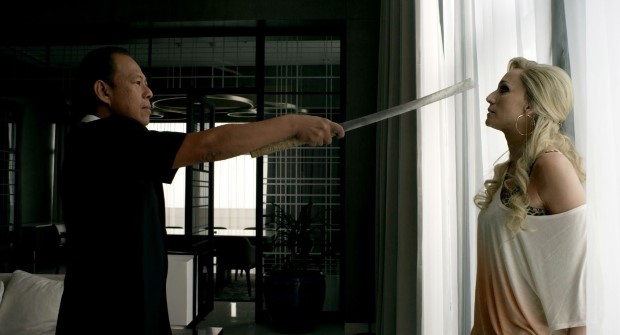 Only God Forgives is the epitome of a film that rewards repeat viewing; defiantly abstruse, some may find Refn’s hammering home of the thematic elements of the film a little heavy handed (A scene representing the innate desire to return to the womb comes instantly to mind) and the considered pace of the film will more than likely deter even some fans of the director’s previous work.

However I really enjoyed Only God Forgives and its fevered, exotic depiction of a living nightmare caused by revenge, guilt and hubris. Best appreciated by fans of David Lynch and Jodorowsky (To whom the film is dedicated), Nicholas Winding Refn’s film is a languid, gorgeously shot homage to minimalist cinema that, despite its polarising critical reception, will find an appreciative audience in the years to come who can fully appreciate this uncompromising realisation of Refn’s vision.

Still, it’s a hard film to recommend as it certainly won’t appeal to fans of mainstream cinema and the criticism being levelled at it for being arrogantly pretentious and obtuse for the sake of it remains subjective, but, personally, I think Only God Forgives is an experience that is unlike most of what’s on offer this year and I’m glad that directors are given the creative freedom to create cinematic expressions such as this.