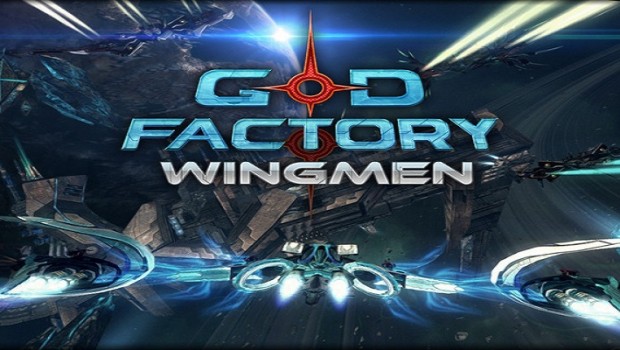 Summary: A welcome blast of space combat and ship to ship battles.

Space ship battles are back

Let’s face it, not since the Wing commander series, or the X-Wing and Tie Fighter series of game has there been anything to appease the scratch for space battles. I mean sure there is Star Trek Online, but when it comes to space combat in small ship to ship combat there has been a huge void. No pun intended.

Jumping on into God Factory: Wingmen I was not even sure what to expect. Certainly I did not expect such a spectacular fun time as this game is. For the things it does right, it’s oh so right. I would say that the only real thing I had to frown about was waiting to get a match going. Once you choose a match, you end up having to wait for the other slots to fill up. Now this is no fault of the game design mind you…it’s just a matter of more people needing to find out what a blast the game is. 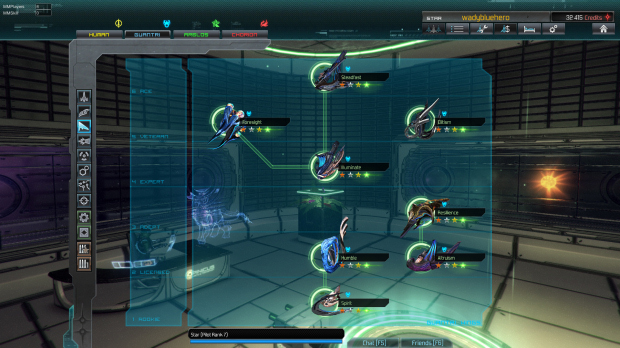 GoD Factory: Wingmen by Nine Dots Studio is a 4v4 competitive space combat game that has some replay ability right out of the gate, and to think that the designers plan on long term support with already planned content and DLC….not only paid DLC and content, but some free stuff too.

Players will enjoy the ship building in this game, there is some great room for showing their individuality in the game. Right on down to coloring their ship’s hull.  Players actually can build their ship piece by piece, tinkering with the space craft’s abilities and stats and look of the ship.

Like any good design in keeping things smooth and well balanced the designers have made it so that players must balance several elements when building their spacecraft. Weight, energy consumption and heat capacity have to all be considered in the mix when building your ultimate battle space craft.

The parts that a player chooses can make the difference in a battle. Because the parts not only can make your ship different but on how it handles over all. Pieces that can be acquired while building run a wide range of parts…. From power cores and shield generators, the main computer and even the cockpit and weapons on the ship and specialty devices that can give a ship some extra surprise abilities. 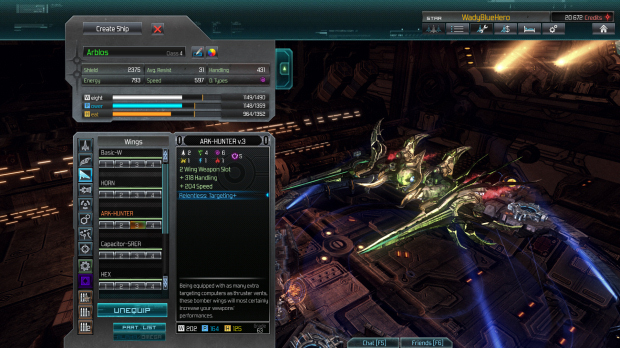 All of this of course means nothing if the person controlling the craft is not balancing and using the ship to its optimum potential and abilities. Let me tell you, testing out the game I went into several battles that had been fast and furious on down to some players being sneaking and using a more stealth approach and trying to avoid ship to ship combat and going right for my carrier.

Ah yes, carriers. Of course blasting your fellow opponents into space dust is fun, but the main goal is taking out the enemy carrier. Sounds simple heh? Well these things fire back at each other too and it is not just a simple task of spending energy rounds or missiles at its hull. Player’s main goals are to attack certain key components of the carrier to whittle it down and ultimately take it out of action. 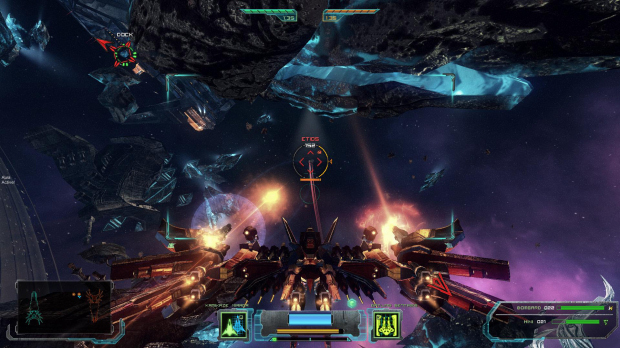 There are several key targets on a carrier, from its cannons and weapons, to things like its radio tower and on down to things like communication towers….there are more parts of course but this gives you the general idea. Plus for each part the player destroys on an enemy carrier, there is of course a negative effect on the carrier and in some cases… the enemy pilots as well.

Strategy and coordination between players is a must if one side wants to have a win. A free for all with no coordination what so ever boils more down to the luck of the draw on who eventually wins.  There is nothing sweeter than a team working together to take out the enemy. It’s a beautiful thing indeed. During a battle players have to consider also that they must protect their own carrier while trying to destroy the enemy carrier. This opens up a lot of significant game playing and cleverly puts tower defense in space and makes it even more exciting.

When it comes to the handling of the ships and the action, one may feel that it leans more to arcade action, but as a flight sim and plane to plane or ship to ship combat fan, I can tell you that GoD Factory: Wingmen scratches a much needed itch in the space combat style of games. 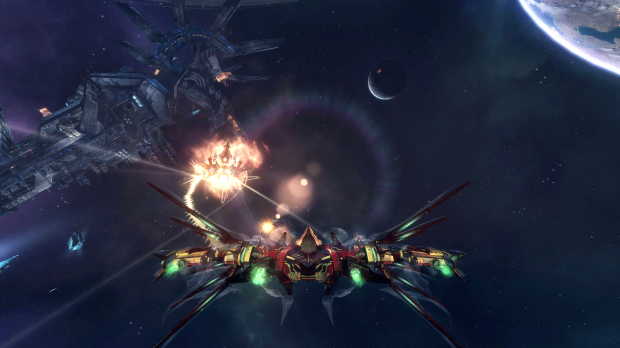 Further enhancing the gaming experience players bring not just one, but two ships to a match. One remains docked and ready for the player if the first ship is blasted to nothing. During a match if both ships are destroyed a player can still get another ship and rejoin the battle…but now they will only be able to use drone ships. These drone ships are nowhere near as powerful as the ships the player may have spent a lot of time building. Never fear…after the match you do get your ships back.

Now while this first launch is a multiplayer extravaganza, word is that this is just a first title in this game universe. There are plans for a single player game as well…with a focus on the story. No word at this time when this will happen but keep checking back from time to time because we will be checking it out and letting you know what we think of it.

Whenever it does come out, it has an excellent multiplayer pedigree to live up to.

GoD Factory: Wingmen is a very welcome game to a genre that needed something like this to come along and bring out the love of space ship to ship battles again. Check it out on STEAM now.