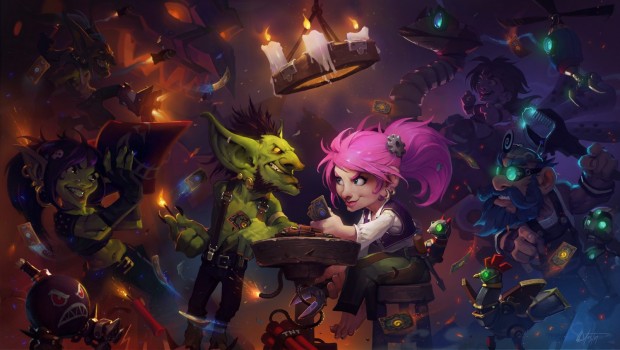 Since the announcement of Goblins vs Gnomes  at BlizzCon 2014, we’ve been tinkering away in preparation to bring one of Warcraft’s greatest rivalries to Hearthstone. Today, we’re excited to announce that Hearthstone’s very first expansion will be exploding onto game boards from December 9!

The new Goblins vs Gnomes card packs will officially become available for Windows®, Mac®, and iPad® on December 9 in Australia, New Zealand and North America, and then roll out to Europe, Korea, Taiwan, and China throughout the day.

Goblins vs Gnomes adds over 120 new cards to craft, win, or purchase, all featuring the manic mayhem of Azeroth’s most mischievous machinists meeting mind to mind, mech to mech, and tech to tech.

We’ve already explored some of the themes that you’ll encounter when rumbling tracks, whirring cogs, and roaring rockets propel the new cards into your collections:

Be ready to build up your decks, card-slingers—and get ready for glorious mayhem and delightful surprises!