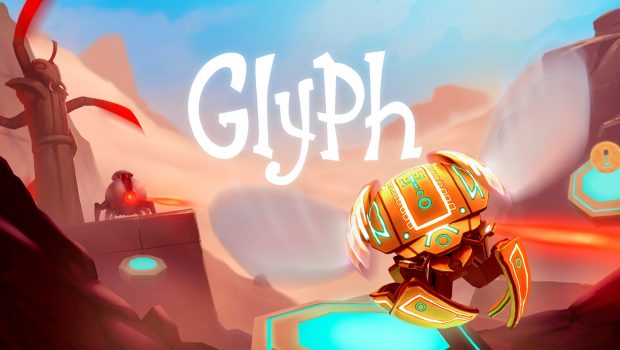 I don’t consider myself to be the most skilled gamer. Put me in front of a first-person shooter or battle royal, and I will be dead in seconds. However, growing up with Mario and mastering recent high difficulty titles such as Celeste and Blue Fire, I consider platforming to be my strongest genre. So, when I first saw the trailer for Glyph, a geometry platformer from Bolverk Games with lovely cell shaded graphics, I was eager to try it out. But about thirty minutes into the game, I began doubting my skills as a self-proclaimed platformer specialist. 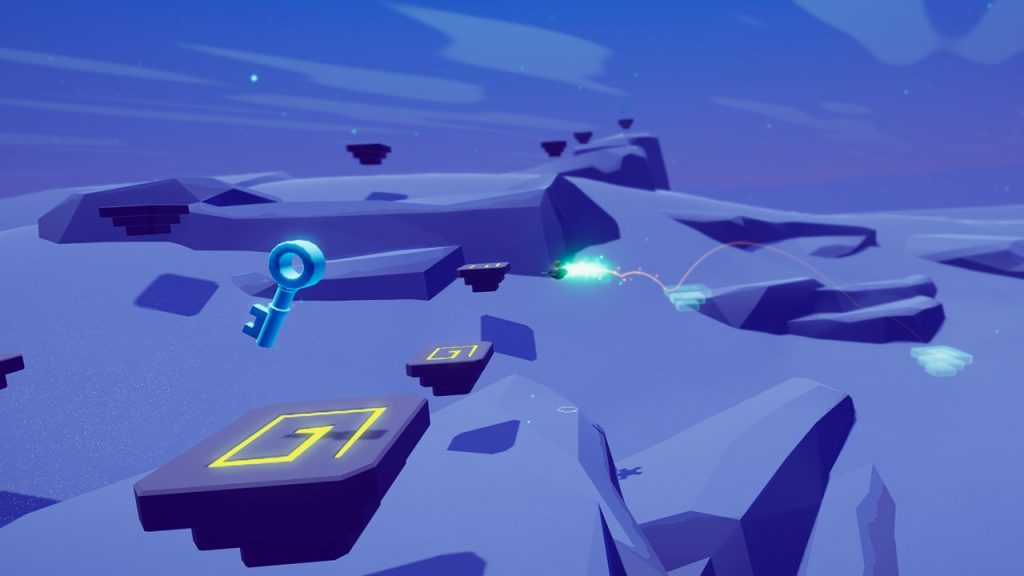 The concept of Glyph is simple: the player assumes control of a mechanical flying bug amidst the ruins of a deserted desert-ridden civilization. The animatronic critter must jump, bounce, glide, and propel itself off objects on its way to the goal, collecting coins and gems to unlock new levels. Glyph’s graphics are easy on the eyes and the game runs beautifully in both docked and handheld modes. The soundtrack is adequate, though ambient sounds of the desert are usually favored over music. Plot elements are light, as the focus of the game is obviously on platforming rather than story. However, I did find myself wanting a bit more from the narrative. The game takes place in a mysterious ancient city, and the payoff for uncovering its secrets was not strong enough to keep me motivated when I got stuck on difficult levels. Glyph was advertised as giving players an experience which would stay with them long after they finish, which I personally did not have. 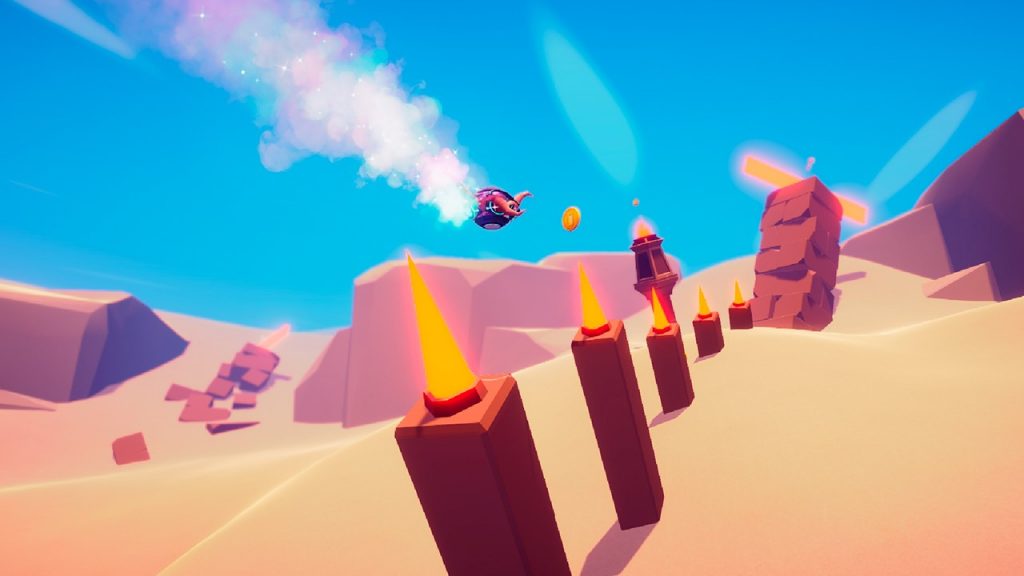 The game feels great to play. The tutorial proficiently readies the player for the types of challenges they will encounter and introduces controls in an approachable way. Utilizing a well-timed bounce and glide to make a difficult jump is immensely satisfying. And though controls feel a bit slippery, there are usually multiple opportunities for the player to correct their momentum with a double jump or bounce.

Connected by a small hub area, the player can easily move from one level to another. There are two types of levels: exploration and time trials. Exploration areas are compact with a clear goal in site. To unlock each area’s exit, the player must collect several keys scattered across the landscape, which are usually well hidden or challenging to reach. These exploration levels are Glyph’s forte. They are well designed, challenging, and each one seems to introduce a new mechanic, such as spiked platforms, or small puzzles to solve. They are perfect for bite size play sessions on the Switch.

Then there are the time trials, which involve getting the avatar to the goal as quickly as possible while avoiding hazards along the way. These areas bring me to my main qualm with Glyph: it can be immensely frustrating. Time trials allow the player to acquire an increasing number of gems depending on how quickly they reach the goal. While simply completing most of the levels isn’t overly daunting, doing so in the allotted time to receive max number of gems is incredibly demanding. Even on the first, and easiest, time trial, it took me thirty minutes to achieve platforming perfection to clear a nine second stage. This difficulty extends to the exploration areas as well, for if the player makes one wrong move and falls into the lethal sand, they must return to the start of the level, surrendering the accumulated keys and up to ten minutes of careful platforming.

These difficulty spikes can be jarring. Upon finishing the first few levels with relative ease, I eagerly jumped into the next area, but was in for a rude awakening. Levels are branded with a difficulty scale of one to five, but even level two stages had the capacity to make me yell at my screen. In the later acts of Glyph, I would sit down with the intention of doing one or two levels for fifteen minutes, only to be stuck on a single stage for over an hour. If these challenges aren’t enough, each stage comes with a hidden token that unlocks a new skin for your robotic companion. These skin changes are purely aesthetic, and with the difficulty being high enough as it is to simply complete a level, I didn’t feel motivated to unlock very many. 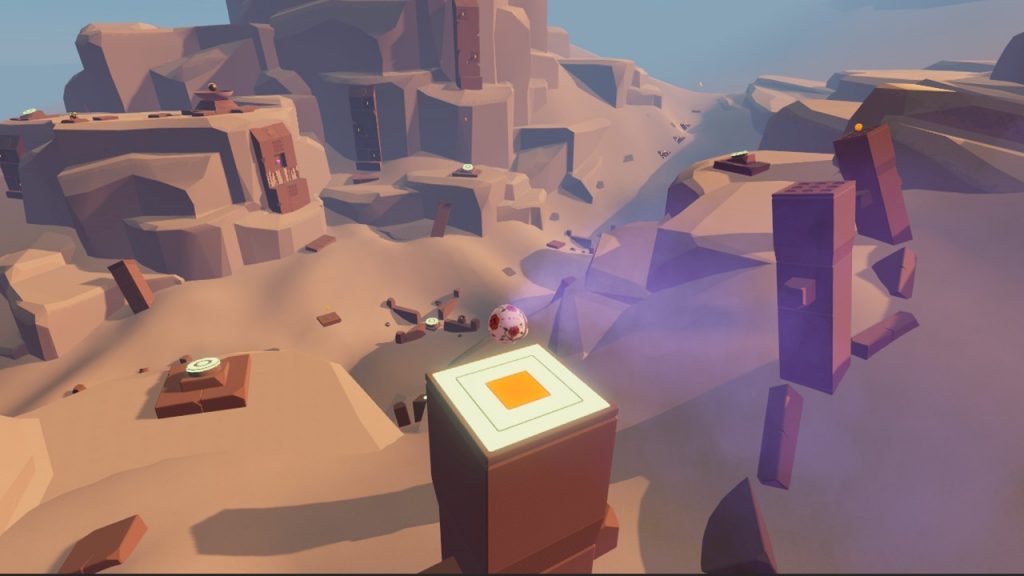 I wanted to enjoy Glyph more than I did. The framework is there: fluid gameplay, beautiful art style, and with over one hundred levels, the game will keep a determined gamer entertained for many hours. But the developers set an unreasonably high bar for progression; one that required me to put the game down multiple times out of exasperation. Newer gamers: beware, but for seasoned players looking for a real challenge, Glyph could be your next rage-inducing favorite. 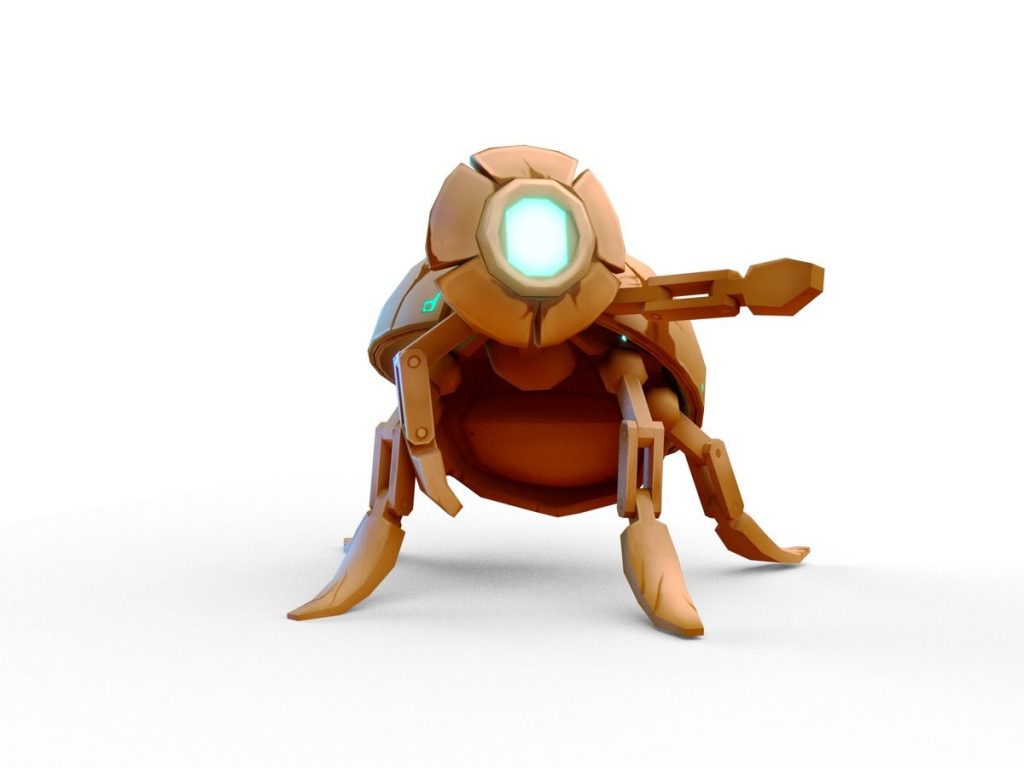