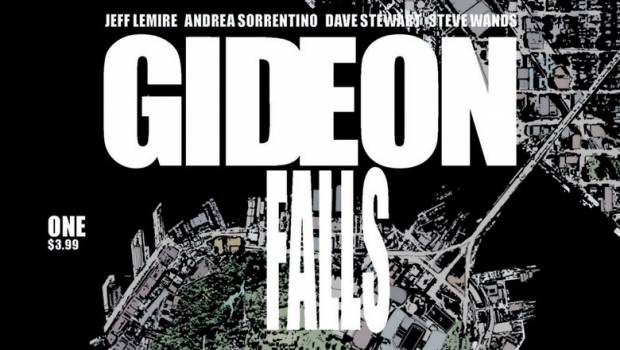 Summary: Fuelled by a deep feeling of unease and apprehension, this surreal horror ventures into sinister territory, as it tackles mental illness and the concept of evil.

Jeff Lemire and Andrea Sorrentino join forces once again to bring us a dark tale about mental illness, conspiracy driven obsessions and an otherworldly legend about a building called The Black Barn. Watch out, delving into this puzzle of madness might leave you questioning reality, God and the presence of evil.

Gideon Falls #1 follows two separate men, whose stories are somehow intertwined and connected. Norton, a troubled young man, gripped with paranoia wanders the city searching through garbage, as he unearths objects that he believes to be messages sent to him. His endless hunting through the city’s trash has become a sick obsession for him, as he tries to make sense of the puzzle, believing that the devil has sent these objects for him to find. His therapist is concerned of a relapse, which could result in him being admitted to hospital once again, ending his time as an outpatient. Visions of a mysterious building called The Black Barn plagues Norton, believing that it is connected to the objects he has been hunting. 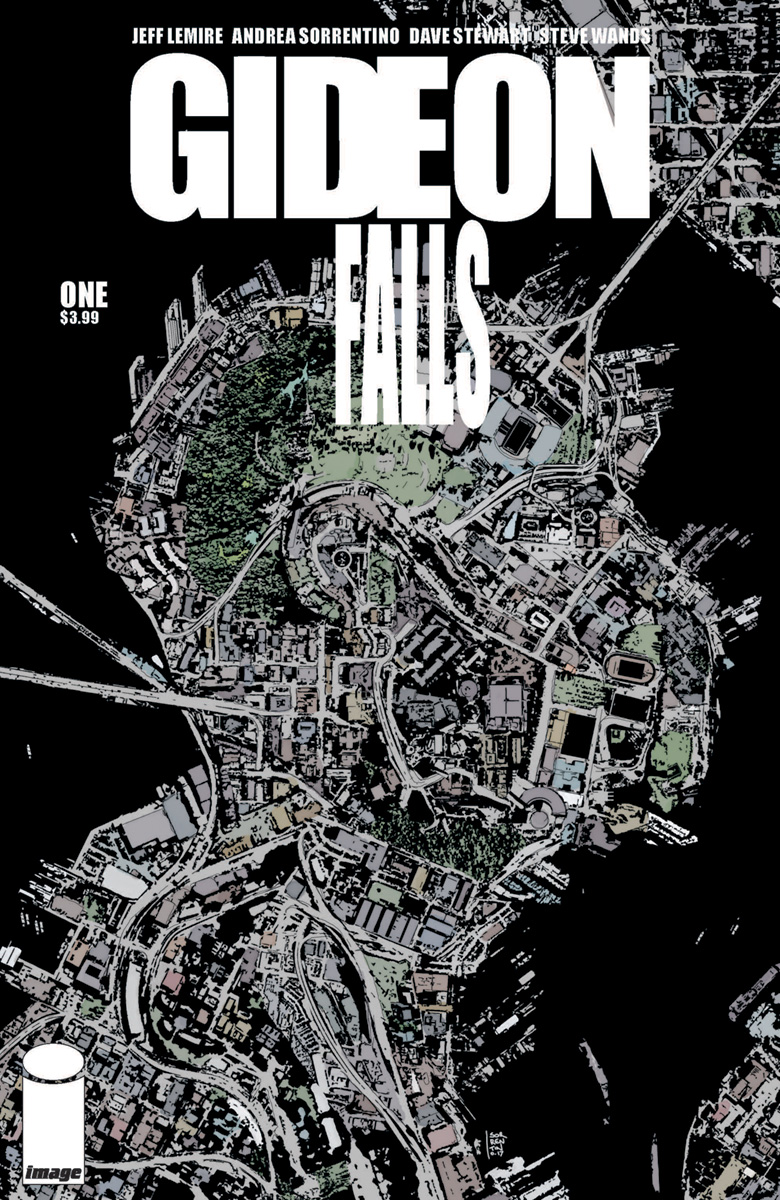 Wilfred, a washed-up Catholic priest with a questionable past is sent to the small country town of Gideon Falls, which needs a new pastor after the sudden death of the previous one. Wilfred doesn’t wish to go but he has no choice in the matter, as he is being sent by the Bishop who believes that quiet solitude of Gideon Falls will act like a tonic for him. After arriving, Wilfred is introduced to Gene Tremblay, a kind woman who is head of the Catholic Women’s League. She offers to help settle Wilfred in, wishing to make him feel comfortable in his new home. He politely declines, wishing to rest and be alone. Later that night he is awoken by an unexpected visitor, who leads him outside to a truly disturbing and horrifying scene.

The overall unsettling and ominous vibe that echoes throughout this story works perfectly in establishing the foundations of the narrative. Paranoia, anxiety obsession and faith are all interconnected, coming together to form a deeply uneasy and menacing tale. I love the ambiguity that the story sets, almost leading the reader into a place of disorientation and confusion, as we also begin to question what is real and what is imagined. Our two main protagonists are both damaged men, trying to reconcile with their troubled pasts. Fractured minds, past regrets and personal grief connect these men, bringing them together through their interaction with The Black Barn. I really like this concept, finding the idea of The Black Barn to be reminiscent of David Lynch’s Black Lodge. It’s still all a bit too early for me to draw too many parallels, apart from the name and possible connection with dark spirits, but I can’t help but think it could be an extra-dimensional place filled with all sorts of surreal horrors and mind-altering realities. How exciting!

The art by Andrea Sorrentino is gritty and expressive, perfectly matching the menacing tone of the narrative. I particularly like the textured grainy effect that is achieved through the use of heavy inking. It gives this world a worn and weathered appearance, with the city appearing grimy and the country looking hot and dusty. There are some pages that have had a lot of thought and effort put into the arrangement of images, making for a visually complex experience. I also enjoy the use of unusual angles and perspectives that we get to see, allowing us to experience this world from varying diverse perspectives. The colouring by Dave Stewart works well alongside the art in heightening the overall menacing nature of the story. Colours are dull and muted, giving everything a grimy and soiled appearance.

Overall, I have thoroughly enjoyed this first issue of Gideon Falls, finding it to be a mysterious and menacing introduction. I’m incredibly intrigued and puzzled – in a good way – with both the characters and the direction the story is taking. Fuelled by a deep feeling of unease and apprehension, this surreal horror ventures into sinister territory, as it tackles mental illness and the concept of evil. Is The Black Barn symbolic of a slow descent into the dark heart of madness? Or, is it evil incarnate? We’ll have to wait to find out. 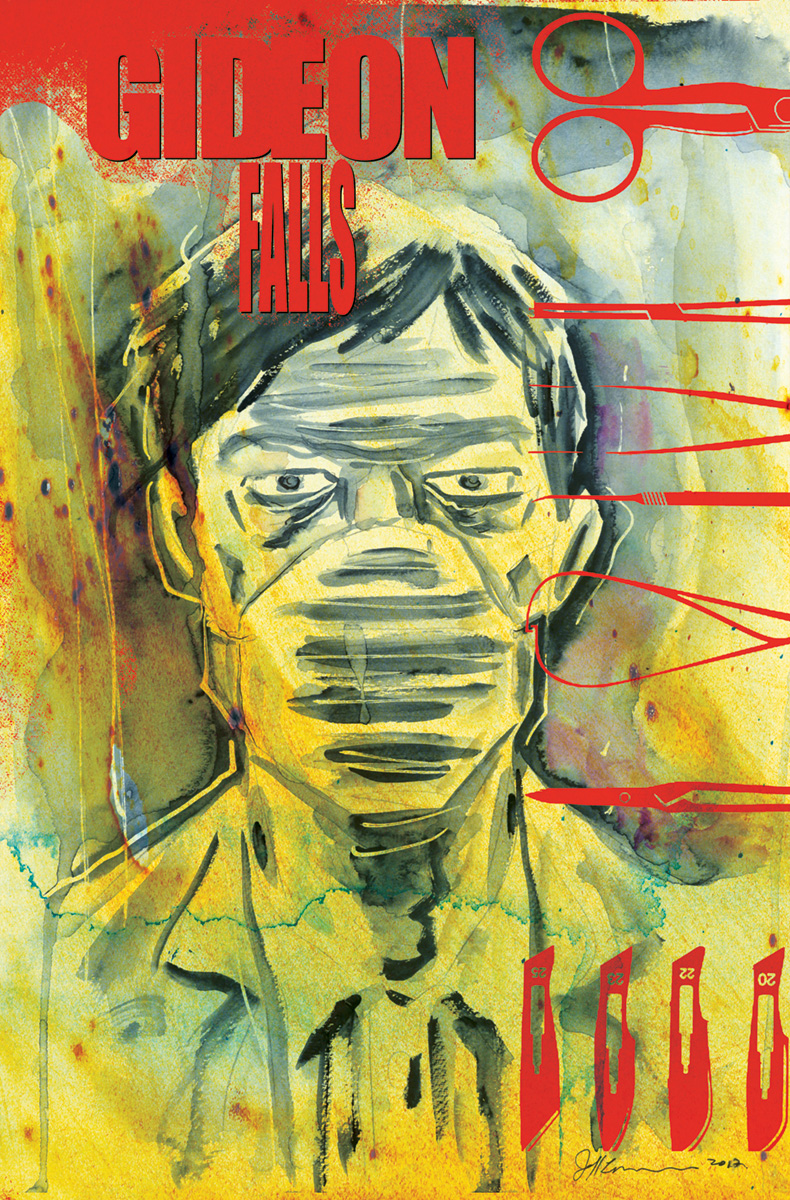