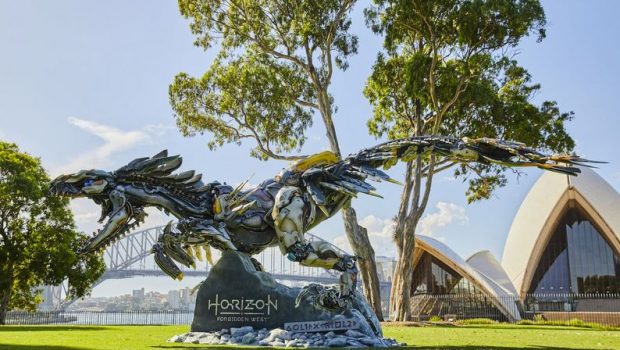 PlayStation Australia today announces the launch of its exclusive title, Horizon Forbidden West (Friday 18th February). To celebrate the launch of the game, The Clawstrider, one of Horizon Forbidden West’s most fearsome machines, has arrived on Australian soil and will be appearing in Sydney’s Royal Botanic Garden as well as 16 other famed international locations over the coming days.

Standing over seven metres long and three metres tall, the iconic Clawstrider, one of Horizon Forbidden West’s most fearsome machines, is currently on show at Bennelong Lawn in Sydney’s Royal Botanic Garden until 22 Feb. Sydneysiders can come face-to-face with the machine, where they can also experience the land of the Forbidden West through an interactive AR lens. Passers-by will also have the chance to win a replica of Aloy’s spear that is featured in the game or a Horizon Forbidden West Collector’s Edition.

“Horizon Forbidden West is filled with incredible adventure and awe-inspiring machines, taking you on a remarkable journey through a vast array of ecosystems – from dry deserts and snowy landscapes, through to lush tropical valleys and beautiful beaches. It was these environments that were our inspiration for the Global Clawstrider campaign that is rolling out from today – kicking off in our very own backyard, in the beautiful Sydney Royal Botanic Garden. Horizon Forbidden West is set to be one of the biggest games of the year and an excellent addition to PlayStation’s unbeatable line up of exclusives, and we look forward to seeing how the world reacts to real-life Clawstriders, turning up in some of the most iconic cities.” said Patrick Lagana, Director of Marketing, PlayStation Australia.

Horizon Forbidden West is the sequel to the award-winning Horizon Zero Dawn and sees the protagonist, Aloy, venture into dangerous unknown territory, confronting a huge variety of new tribes and deadly machines in her quest to save the world once again.

There is also the chance for one lucky winner to get their hands on a PS5 by entering the hidden code found at the Clawstrider at playstation.com. Get there quick, there’s only one to be found!