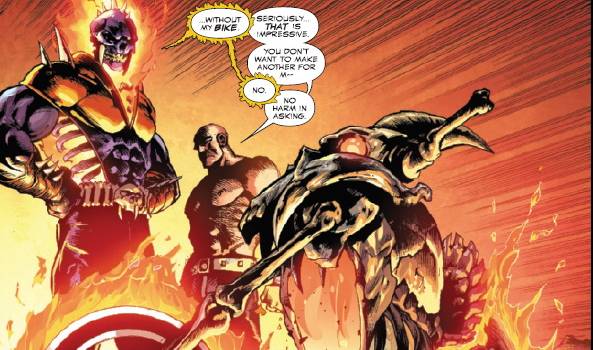 Summary: A death metal fantasy for teenage boys but that is what is expected of this series by now.

After being caught up in a political struggle amongst the rulers of Hell, Badilino has been sent to extra-Hell reserved to the people who have conspired against Hell. Lucky for him a fellow inmate helps him turn back into Vengeance and they fight their way out of Hell together, but that is only the start of this story.

I had heard of Ghost Rider and the movie with Nicholas Cage but not read any of the comics before. As stated in the story this is one of the many Ghost Riders whose job it was to fight other ones with that title on behalf of hell. There is certainly a lot of fighting in this one and as it is at the start of this storyline it is an ideal place to start reading this story.

While some may complain that this story is the work of a teenage boy’s fantasy that is exactly what this series is about. If you are a fan of generic black metal and skulls you will enjoy this one.

There is a lot of inventive artwork and character design in this and the demons are suitably hellish.

This would be a good series to do an animated version of but I am not sure they have every attempted that.