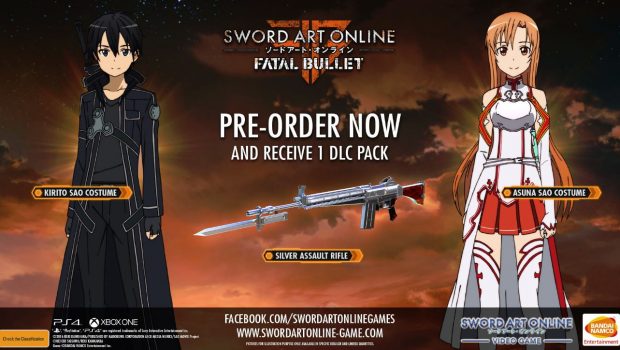 GET READY TO JOIN THE ACTION ON THE 23RD FEBRUARY 2018 WITH THE OFFICIAL SWORD ART ONLINE: FATAL BULLET RETAIL PRE-ORDER & COLLECTOR EDITION

BANDAI NAMCO Entertainment Europe announces today all the physical Editions available for Sword Art Online: Fatal Bullet, the new instalment of one of the most beloved anime series, developed by Dimps Corporation. Along with the edition’s announcement and the retail pre-orderthe official release date has been undisclosed: the game will be shot into physical and digital stores on the 23rd February 2018.

Here all the available editions:

For those who will pre-order the game*, a code will be available which will unlock SAO Asuna and SAO Kirito Costumes and the Silver Assault Rifle, an in-game weapon.

To celebrate the pre-order opening new info about the game has been undisclosed:

–        UFG Weapon: The user’s avatar will be gifted by the ArFA-Sys with this special weapon. It enables 3D movements around the environment allowing the player to throw a light wire and reach higher areas of the map, getting closer to enemies reaching a better shooting position or to hit flying opponents.

–        Bounty Player: In offline mode, besides enemies, some NPC will appear and challenge the player. They can appear in group of 4 or alone and defeating them will guarantee more rewards and a thrilling experience.

–        New Characters: Besides Kirito, Asuna and Sinon new characters will join the crew like Yuuki, Strea, LLenn and Pitohui, both from Alternative Online Gun Gale

–        GC Events: During the game some special actions can trigger special party events to discover more about the characters’ life.

Sword Art Online: Fatal Bullet will be available on the 23rd February 2018, simultaneously for the first time on PlayStation 4, Xbox One, PC Digital Via STEAM™.