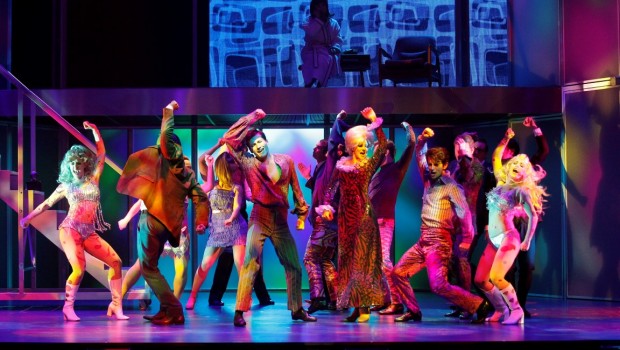 GEORGY GIRL THE SEEKERS MUSICAL – BEHIND THE SCENES

Celebrating one of Australia’s most loved groups, Georgy Girl – The Seekers Musical tells the remarkable story of legendary pop group The Seekers, the first Australian band to achieve international success.

Georgy Girl – The Seekers Musical is truly Australian made, an Australian story put on stage by an all Australian cast and creative team. The ‘Behind the Scenes’ documentary will take viewers from across the country into the world where this all brilliantly came together.  From its inception, the creative process, rehearsal period and of course landing on stage, the special will feature interviews with all the cast and creative team as they work to bring this incredible story and its music to the theatre stage.

Currently playing in Melbourne until March 20th and opening in Sydney from April 2nd, Georgy Girl – The Seekers Musical, features all their hit songs including The Carnival is Over, I’ll Never Find Another You, Morningtown Ride, A World of Our Own and of course, the Oscar-nominated Georgy Girl. Classic songs enjoyed by generations of music lovers around the world, and particularly by Australians, for whom The Seekers are part of their musical DNA.

“FOUR STARS. A major hit … An entertaining flashback to the music of The Seekers and the progressive 60s that we now view with increasing nostalgia … You’ll sing along with every tune.” – Herald Sun

“The leads don’t disappoint, channelling the Seekers’ iconic sound with flair … Fans of Australia’s first supergroup will certainly enjoy the trip down memory lane.” – The Age

“Georgy Girl is a reminder of just how broad the Seekers’ appeal was. It’s as escapist and adorable as the band.” –The Australian

Georgy Girl – The Seekers Musical follows the story of Judith Durham, Athol Guy, Keith Potger and Bruce Woodley, from their folk and jazz beginnings in Melbourne to their meteoric rise to world pop stardom in the ‘60s, to today. The show stars Pippa Grandison as Judith Durham, Phillip Lowe as Keith Potger, Mike McLeish as Bruce Woodley and Glaston Toft as Athol Guy.

The show spans the decades from selling millions of records and topping the charts around the world, breaking up in 1968 and eventually reuniting in 1993, when they reformed for their ‘25 Year Silver Jubilee Reunion’ tour, and to a sold-out UK tour last year for their 50th anniversary ‘Golden Jubilee’ tour (including two capacity concerts at London’s Royal Albert Hall) – and as of today, almost 13 million YouTube views of their classic I’ll Never Find Another You footage from 1968.

Written by Patrick Edgeworth, Georgy Girl – The Seekers Musical tells the incredible story of one of the country’s true national treasures. A band whose modest beginnings at a café in South Yarra took them to concerts around the world. It’s a journey full of laughter, a few tears, but most of all, featuring the magnificent songs we all know and love. This brand new musical is produced by Richard East, an originating producer of Mamma Mia!, and Dennis Smith, producer of Dusty – The Original Pop Diva.

And now the carnival continues with Georgy Girl – The Seekers Musical currently playing at Melbourne’s Her Majesty’s Theatre until March 20th before it Sydney premiere on April 2nd for a strictly limited season.

Georgy Girl – The Seekers Musical is directed by Gary Young with musical supervision by Stephen Amos.