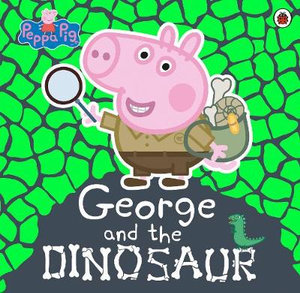 George and the Dinosaur Book Review

Summary: George and the Dinosaur is a delightful tale about imagination and discovery!

This delightful book in the Peppa Pig series revolves around her little brother George and his love and fascination about all things Dinosaurs. As a result, the book is written from the perspective of George as it begins with Peppa’s brother roaring like a Dinosaur as he is playing in a sandpit. This becomes the catalyst and premise behind the story.

From here, the reader goes on a clever adventure with George as our little piglet vows to find a complete dinosaur skeleton as he puts on his explorer clothes and goes exploring to find the impossible. Also joining George is fellow “palaeontologist”  Miss Rabbit and his friends as the hunt begins for dinosaurs.

All in all, George and the Dinosaur is a fun and refreshing take on the Peppa series and it’s always nice to showcase one of the other characters with this time being her younger brother. Furthermore, it’s a well-written book that helps bring the story to life and when matched with the colourful illustrations, it’s sure to become a favourite to your little lovers of Dinosaurs.