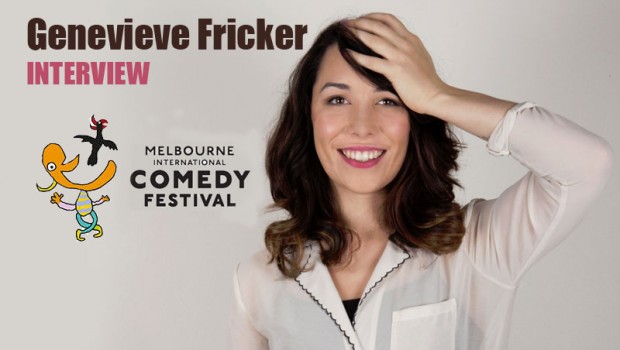 Impulse Gamer interviews Genevieve (Gen) Fricker, a Sydney-based comedian, writer, musician and 2011 Nationalist Finalist in the Triple J Raw Comedy Competition about her new show at the 2015 Melbourne International Comedy Festival, Monster Pussy. In addition to stand up, Fricker has appeared on Spicks and Specks, Legally Brown, was a columnist for the Sydney Morning Herald, worked as a writer/performer on ABC 2’s The Roast and Triple J’s Chatback with Tom Ballard and currently presents Middawns on Triple J.

Welcome to Impulse Gamer Gen and you’ve probably been asked this question a million times now but what made you get into comedy?

I was actually at uni doing arts/history and a bunch of my friends would go to the comedy nights. I started hanging out there with all these cool people and they became my close friendship group. Through that, I thought I could hang out with these people more if I started doing the sketch and improv groups for stand-up nights so that’s how I ended up doing comedy. 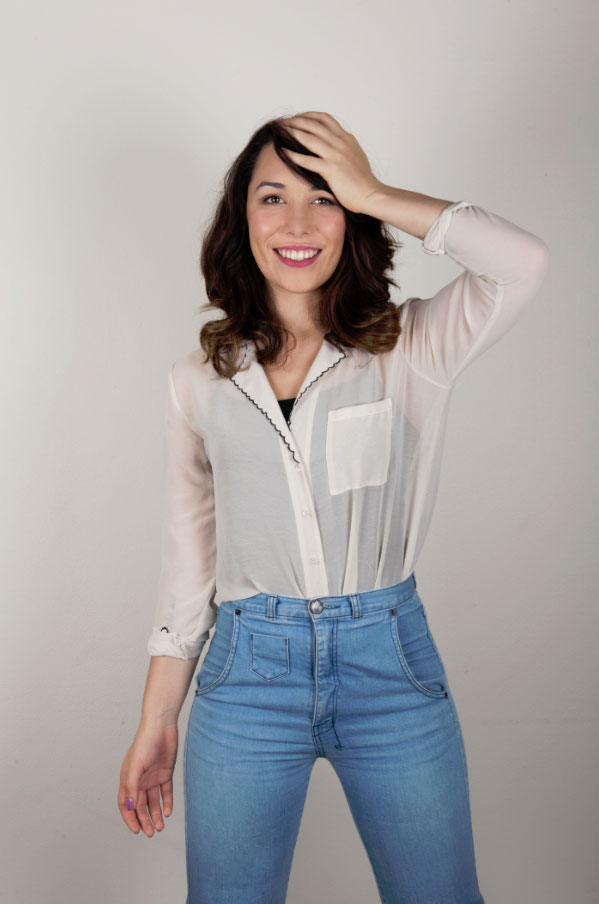 Growing up who were some of your comedic inspirations?

To be honest, I never thought of being comedian until I was about 19 and at uni. I was definitely fans of certain comedies like The Mighty Boosh, 30 Rock and things like that but I never really thought about it until I started meeting people in the industry.

What was it like being a national finalist in Triple J Raw Comedy Competition? Was this a huge buzz for you being in the finals?

Absolutely! I had no idea what I was getting into or had any expectations whatsoever. I only entered Raw because all my friends were doing it and I just assumed that they would all get through. Then when I got through, it was crazy, huge and unexpected. Once again, I had no idea what I got myself into until I walked into Town Hall, saw the set and how many people were going. Also, the kind of people going were like famous comics, producers and things like that so yeah, it was a huge thrill and I’m very grateful that I got to do that.

Can you tell us what your first stand-up gig was like?

My first stand-up gig was at Sydney Uni in my friends stand-up room and I did a character called Lady Haha the Lady Gaga of Comedy <laugh>. It was kind of a mix of Jerry Seinfeld observational comedy but with an absurdist twist. I was dressed in blue jeans, white sneakers (Seinfeld style) and I sew myself a glittering cape that I adorned with a lot of eyeballs which were stitched on. I was then “what’s the deal with riding your Tyrannosaurus Rex to work?“. You know, just things like that really, absurd things. I also drank a beer through a straw which is all I really remember about that night<laugh>.

What’s the funniest thing that has happened to you during stand-up?

Last year at the festival, a lot of young teenage boys were turning up to my shows which was kind of weird. I remember one night in Perth where there was a 14-year old kid sitting with his dad and my show is definitely not for kids <laugh>. But whatever, I’ll take the money… so I was kind of talking about adult stuff and then I looked at this kid and said you’re definitely not old enough for this and I said “how old are you?”, he was like old enough and then nodded which was hilarious and a kind of unsettling.

<Laugh> totally but freaky people coming to my shows is the best. Maybe if they’re over the age of 18 is better though!

So in Australia do hecklers still exist and have you ever been heckled?

Hecklers definitely do still exist and I get heckled in a very specific way which is usually before I say anything. So as I walk out, people will wolf whistle me or heckle and then I just shut it down as I speak. So yeah, I start my sketch and people just shut up. But it definitely still exists in Australia which is a shame but some comics really love it but it doesn’t really work for what I do because it’s kind of musical and stuff. If people are heckling, it’s like yelling at a TV, it’s not going to stop and address you… it has to keep going.

You’re at the 2015 Melbourne International Comedy Festival this year so how did you come up with the premise behind Monsterpussy?

There really isn’t a premise and it’s not really about anything specific. It’s just kind of lots of different bits and there is no real theme to it I guess other than me being in it. It’s just funny basically… that’s the premise, the funny show! <Laugh> 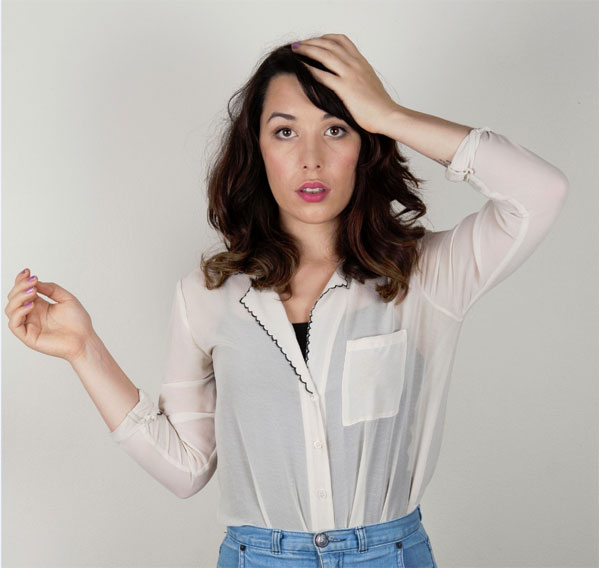 What can Melbourne audiences expect from Monsterpussy?

I think it’s my most fun show that I’ve done and definitely the silliest and dumbest. I play a bit of piano in it which is new and also some guitar as well plus the introduction of electronic elements which is really fun. I don’t want to give too much away but that’s kind of it! That’s probably enough of a tease?

With your musical numbers, what kind of topics do you touch upon?

There’s a bit of storytelling stuff such as the piano and as always, retarded love songs <laugh>. I guess that’s because it’s the music I kind of like, love songs so I play with that premise.

Can you tell us a little about the development of a new show in terms of writing, practicing and finally performing live?

I don’t really have a formula but I know that some people are quite structured with their approach. So for me, when I finished the last comedy festival, I’ll have a week to myself and then I put the next application for the comedy festival in which has just opened and you kind of just start panic writing. I’m always writing stuff to fit those kind of things or with the musical stuff, it’s things I’ve been experimenting at home with … like sounds and I have a home studio setup so I just start writing for that and try to incorporate it into my live show. Otherwise I’ll collaborate with someone on an idea which is usually just for shits and giggles that might turn into something latter.

Do you target any audience members in your show and if so, should they be scared?

No, I’m really nice to people compared to some others. I think I’m just grateful that people still show up <laugh>. I’m just too scared to just go anyone and I think that people come to the show are generally like-minded people so I don’t really having anything to go them on. I don’t know, I guess I don’t shit where I eat <laugh> … is that the right term?

Besides your show are you going to see any of the other comedians this year?

No! <laugh> I’m looking forward to so many good shows. I’m really looking forward to see Sam Campbell’s new show, he’s also on at the Portland. Becky Lucas is doing her debut new show as well at the Portland. Anne Edmonds, I always love her shows every year, Aunty Donna of course and I think they’re the best sketch group in Australia. I think it’s really cool that they’ve blown up over the last year.

Fancy Boy will be incredibly fucked up and amazing … there’s just so many shows and I think there’s like 400 shows or something through the whole month which is insane. That’s another good thing about the festival as you always end up wandering into a show at like 11pm and it’s always the best thing as you have no plans but always fall into stuff at the last minute which is surprising, amazing and completely different to what you expected.

What’s your favourite part of working for Triple J?

I’m a huge fan of the station in general so I’m still very star truck by seeing these people who are my colleagues I guess? So people like Linda Mariano, when I see her, I’m just so shy and I can’t look her in the face. She’s so nice too! <laugh>

So Gen, what’s something that people don’t know about you?

I like everyone to know that I’m a big skuzzbucket because I feel people think I’m maybe a little bit fancy or something. People always expect me to be something else and then when they hang out with me for longer than 10 minutes, they realise that I’m stupid, gross and weird which I feel like I’ve been very upfront and unapologetic about but still, they think it’s an act… but it’s not an act <laugh>.

I’m doing Melbourne, Sydney and Perth Festivals with potentially Edinburgh. I have to move house as well and I’ll essentially be homeless when I come back from Melbourne so that’s my main plan, to find somewhere to live and not be homeless. There’s a few different projects going on but it’s always the thing that it’s not a thing until it’s a thing… does that make sense?

Thanks again Gen and good luck with Monsterpussy, 2015 and the “thing”! 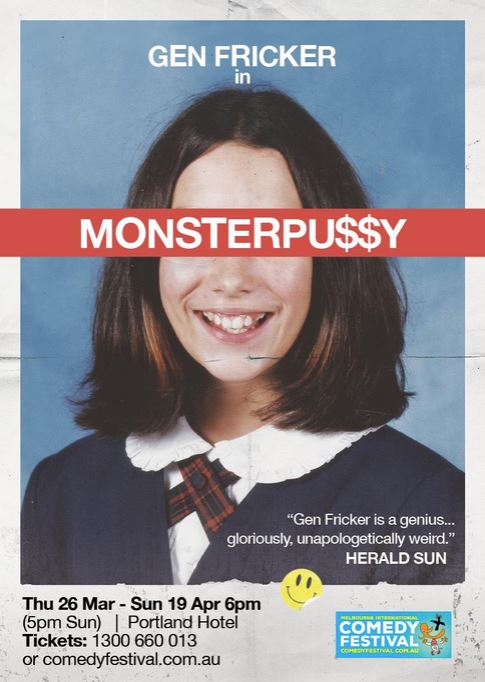