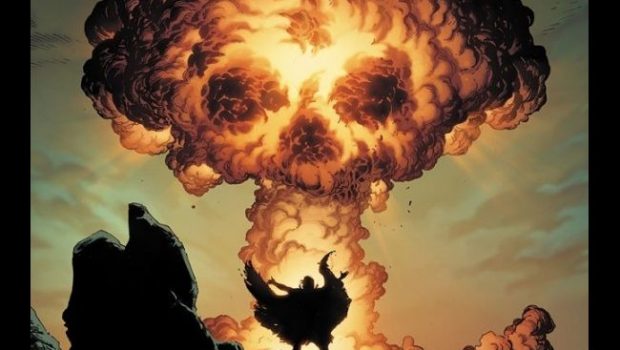 Summary: Good to see something different in this genre and hopefully it works out to be an interesting series.

Set in the aftermath of a nuclear war outside of Boulder Colorado some scavengers talk about the legend of a glowing man who roams the wastes without the aid of a radiation suit, only to find the same man in the flesh. Flash back to the few minutes before the war and we see how he got that way. Meanwhile back in Las Vegas the king wants to go on a hunt to meet the legend.

Post nuclear war stories are well known these days with the Fallout series of games and many other works of fiction so it is hard to stand out and make your own mark without at least acknowledging them in the story. This story is not really big on action but does say a lot in the short amount of pages and does not make any moral judgements on the characters.

I did believe what happened at the start with the main character’s neighbours willing to kill to get into the bunker but what happened after is the fantasy element. It would not be much of story if everyone just got cancer and died.

If you are in the mood for some nihilism then I would recommend this one as it starts with a nuclear explosion and can’t get possibly worse from there.

Not sure which way they are going to go with the main character as he is a survivor above anything else and the real “bad guy” in this only seems that way as he is trying to live up to an ideal.

An interesting start and I would like to see how it goes.