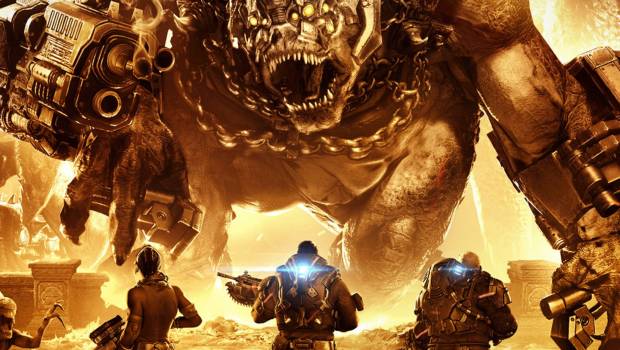 Summary: Gears Tactics is a fun and rewarding turn based strategy game with fast paced combat and a stunning presentation.

Gears Tactics is a new addition to the Gears of Wars series by Splash Damage in conjunction with The Coalition and published by Xbox Game Studios. While the previous entries of the series are third person squad shooters, Tactics, as its name implies, is all about turn based tactics.

At first glance it’s easy to dismiss the combat in Gears Tactics as another clone of 2012’s XCOM: Enemy Unknown, or even more so as a clone of its 2016 sequel, XCOM 2. That would be a disservice, because while Gears Tactics does bear many similarities to the XCOM series, it also finds new and exciting ways to tinker with that tried and true formula. It stands up well enough on its own that it doesn’t just feel like XCOM with a Gears of War skin. 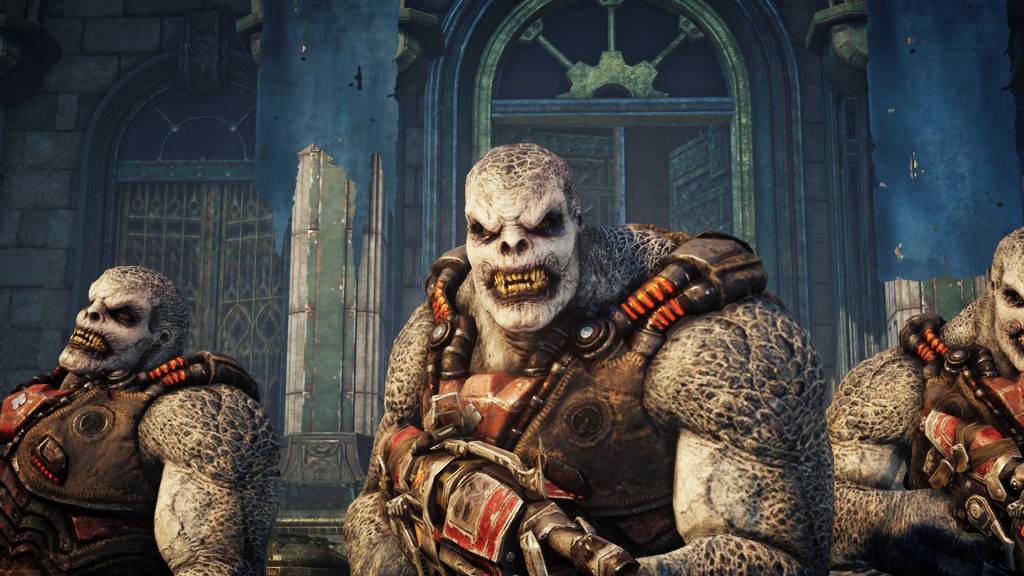 If you’re unfamiliar with the Gears of War series, it’s set on Sera, a near-Earth type world that has been overrun with an underground horde called the Locust. Gears Tactics is set about ten years prior to Gears of War 1. You take command of Gabriel Diaz and Sid Redburn, two Coalition soldiers on the trail of a powerful yet elusive Locust named Ukkon. Gabe and Sid have no real official backing and are forced to recruit new allies along the way to help them in their mission.

The story is considered canon, and Gears Tactics offers an interesting new look at the Gears of War universe. 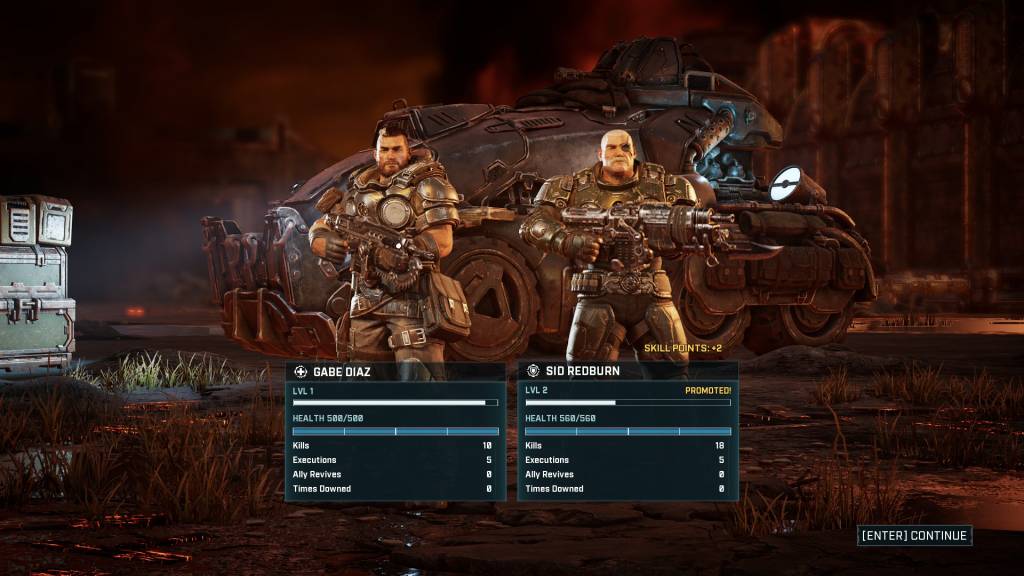 It’s difficult to ignore the comparisons to XCOM 2, right from the mission launch screen. You assign soldiers to a mission, outfit them, and then when you launch they turn around to board the APC waiting behind them. The missions play out on war torn maps with fog of war concealing the edges, and your units advance with a limited number of actions as they go up against superior enemy forces.

That said, Gears Tactics is a refreshingly new take on the genre. Combat moves surprisingly fast. Each of your unit starts its turn with three actions they can use for any combination of movement, shooting and skills. Through the clever use of skills and abilities, you can grant bonus actions to one or more units and keep your turn going long after it should have been over. It’s super satisfying snatching victory from the jaws of defeat, turning things around with quick thinking and smart strategy. 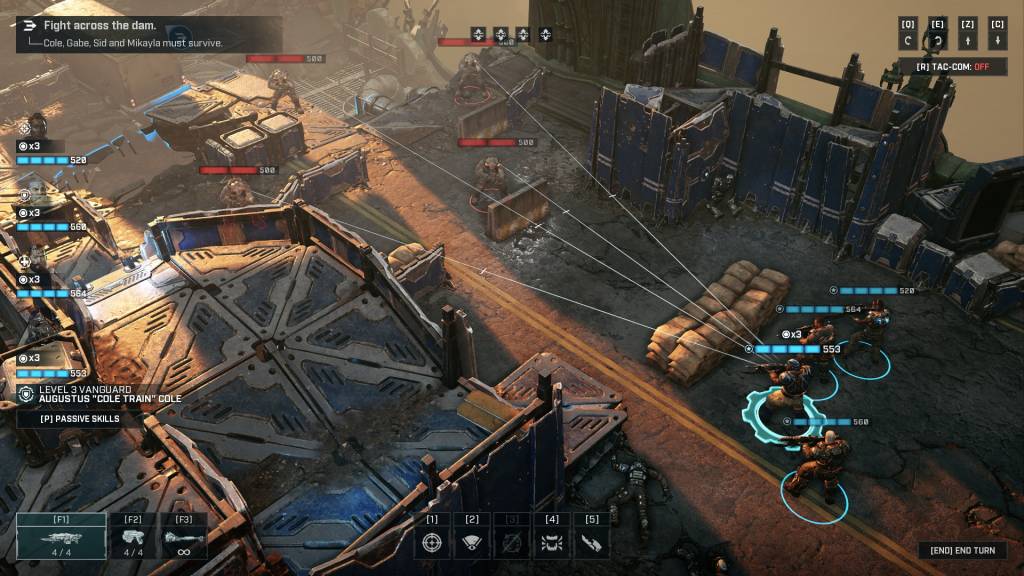 Like with the XCOM series, Gears Tactics lets you put units on overwatch to end a turn if you have actions remaining. Gears Tactics has you set up a firing cone, and different weapons have different areas of coverage. Careful though, because friendly fire is definitely on—which is true for both your units and the enemy.

Equipment cases scattered about the levels encourage exploration, and occasionally force you to make a choice between going for that epic case on the edge of the map or guarding your objective. Optional objectives accompany each mission and grant bonus gear—but failing to meet them never feels like being cheated out of essential drops. There is plenty of equipment to be had on Ukkon’s trail, ranging in quality from common to legendary.

Soldiers (except from the hero units) can be fully customized and renamed, and any cosmetic changes you make will appear in cutscenes that occur while on mission.

Your squad gains experience and levels up, and you can recruit additional Gears along the way. Leveling is class based, and each class has four separate skill paths upon which they can embark. A soldier’s class also determines their gear, and what mods you can equip them with. Higher level characters come with more skill points, which means more active skills and more passive abilities, which can change the tide of a mission. 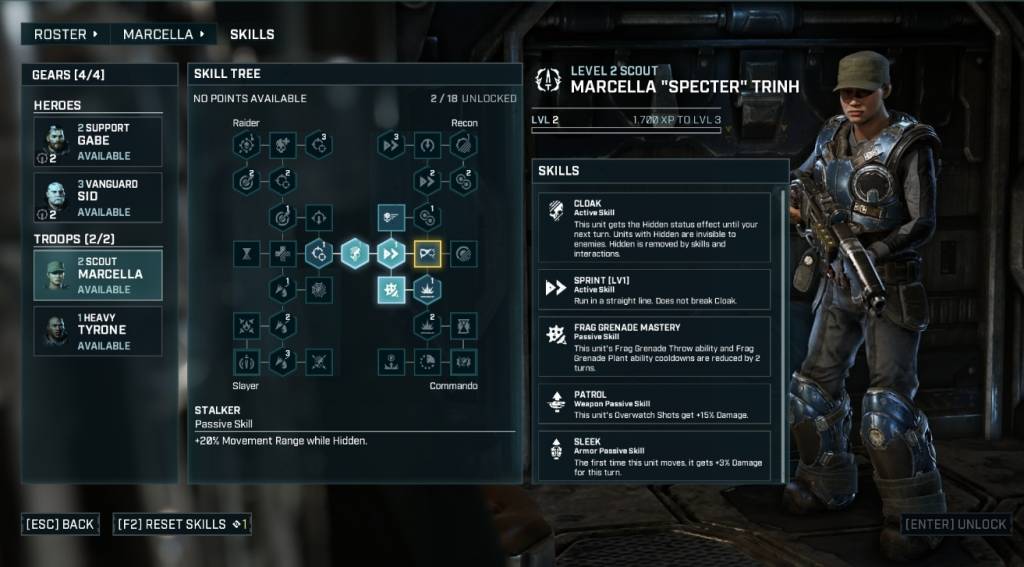 Missions come in several types. Story missions don’t always have a clear objective from the start. Side missions often involve holding an objective, gathering resource crates ahead of nemacyst strikes, or rescuing captured Gears from Locust torture pods. Enemies either begin in place on the map, spring up from underground through emergence holes (which must be sealed with frag grenades), or drop in from units flying overhead. And there are often a LOT of enemies. But despite this, gameplay moves fast and combat is just plain fun. It never gets old watching a Locust soldier getting shredded by a chainsaw or impaled by a bayonet charge. Some enemies drop powerful limited use weapons that any member of your squad can pick up and use. (Boomshot, anyone?) 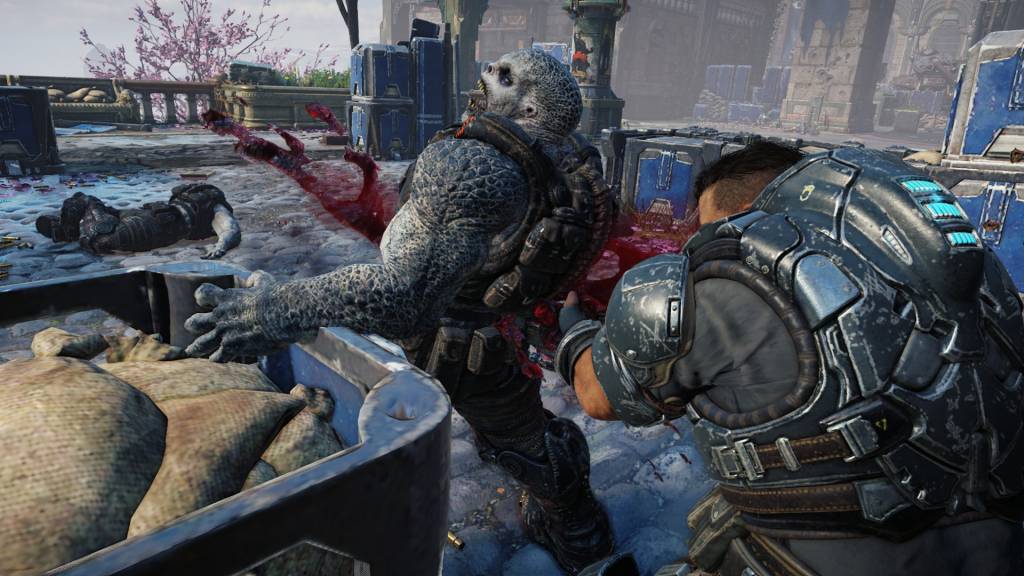 Missions use a checkpoint system, meaning that if you fail a mission or a mission looks like it’s going south, you can easily reload from the last checkpoint and avoid having to replay entire missions. Squad members that go down in a fight can be revived by their allies before they bleed out—each time they do so they take an injury, which must be healed by keeping them sidelined for a mission or two. Keep in mind that enemies can revive each other too. But fortunately, executing enemies grants a bonus action to every other unit, which really feels like rallying the squad due to a boost in morale.

Boss fights switch up the formula a bit and require a new level of planning. Certain large bosses may require you to disable separate parts of the enemy unit, while staying out of range of its attacks and still dealing with enemy reinforcements (which will often keep popping up through emergence holes). 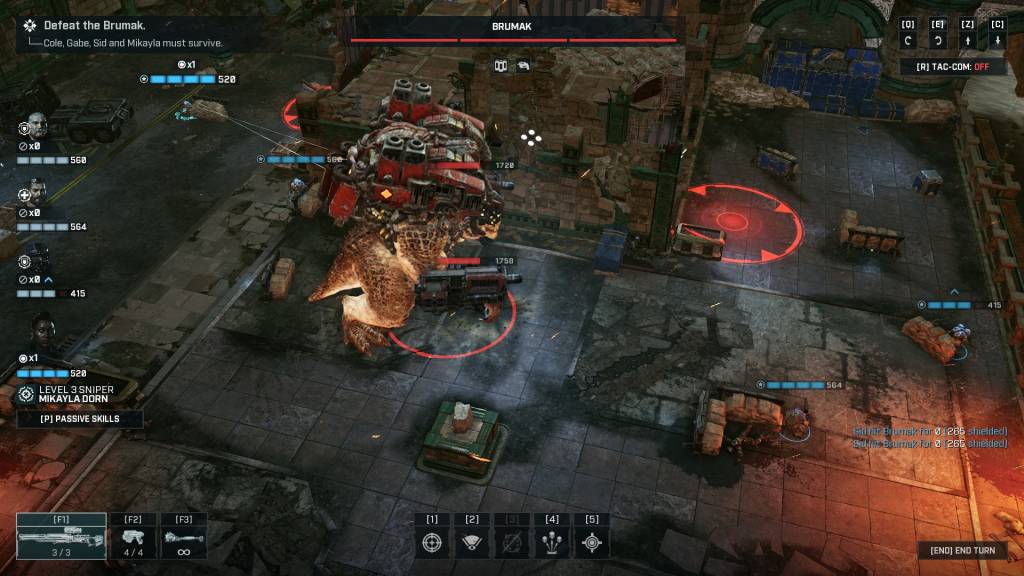 Gears Tactics is a fantastic strategy game and an excellent addition to the Gears of War series, and I’d recommend it to anyone who is either a fan of Gears of War, or to the XCOM series style of game. Also, Cole Train, as always, is a goddamn delight.