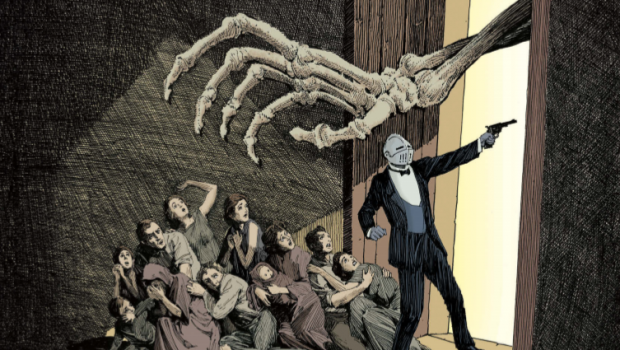 Summary: An excellent collection of stories. The illustrations are great and the stories are a lot of fun.

Terrifying and fun occult adventures with the mysterious Benedict and his Corpus Monstrum that are beautifully illustrated by writer and illustrator Gary Gianni.

The occult has always slipped in and out of the popular consciousness, recently it has returned. Humanity has often dreamed of, or perceived, shadowy things lurking in the dark at the fringes of civilisation. Some of these haunt just beyond the campfire, others in the woods at the edge of town, or amongst the wastes at the limit of the city. This fascination may be driven by our desire to slip out of the mundanity of day to day existence, or perhaps it’s a desire to envision ourselves as part of a larger cosmic battle between the forces of the light and the dark. Either way, it has lingered with humanity through the ages and driven us to do both horrible and amazing things as a species – from torturing one another in the cruellest and most unimaginable ways or developing amazing leaps in scientific understanding and invention. And maybe there are shadowy things writing in the dark, ready to feed off our fears and feast off our still warm corpses. Maybe there actually is an ongoing battle between good and evil, and maybe the darkness sneaks closer and closer to victory with each passing moment and horrific act. In which case, it is fortunate that Gary Gianna’s Monstermen of the Corpus Monstrum are here to snatch a few crucial victories against the interminable march of darkness that assails us. Led by the helmeted hero Benedict, this ragtag bunch of dilettantes fight the key battles that stop civilisation slipping into the dark. Finally released as a trade paperback, Gary Gianni’s pen masterpiece is a must have for any aficionado of the weird, occult, or gothic. 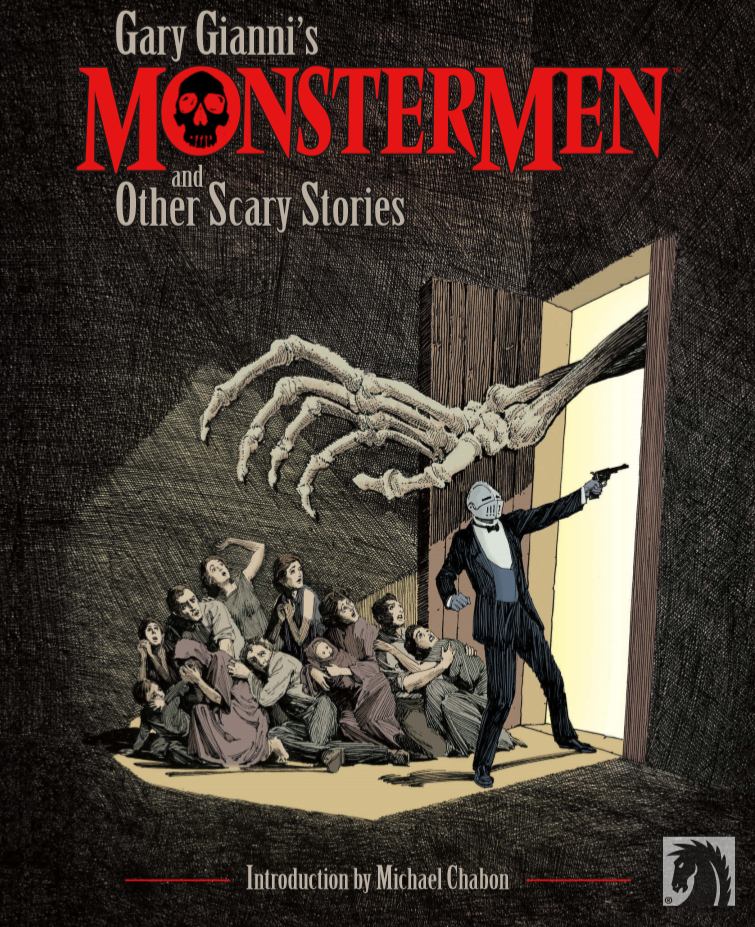 With the increasing concern with the sciences during the late 19th century the genre of the Gothic emerged from the shadows of a jaded and corrupt European consciousness and before stalking across the Atlantic in time for the early 20th Century. Poe and Chambers, and later Howard and Lovecraft to embrace the legacy begun by Mary Shelly and Horace Walpole. The perceived corruption and intellectual decline fuelling depictions of a civilisation in decline reeling from its realisation that its place in the cosmos is infinitesimally small and insignificant. The tentacles that writhed across space and time from the troubled depth of their composers were at first considered pulp fodder, cheap and unsavoury fantasies for children and depraved imaginations. Yet, as the 20th century progressed and segued into the 21st these once maligned texts have seized control of the popular imagination and begun to hold sway shuddering efficacy. The Monstermen and Other Stories gladly fits into this genre and its traditions. Between its covers, you will meet deformed acolytes, hordes of creatures from beyond, ghosts, monsters, and things that have risen from the depth of the oceans and our imaginations. Gianni’s The Monstermen first appeared as companion stories in Mingola’s Hellboy. Its stories relate the adventures of the Corpus Monstrum, an ancient society led by the mysterious amour wearing Benedict and his associate the millionaire filmmaker Lawrence St. George. These occult and mysterious stories are humorously told and beautifully illustrated with Gianni’s old school pen and ink style. The adventures of Benedict, St George, and journalist Sunset Lane owe a great debt to the classics of horror and the gothic, but are also mindful of some of the issues around gender and race that haunt the genre. 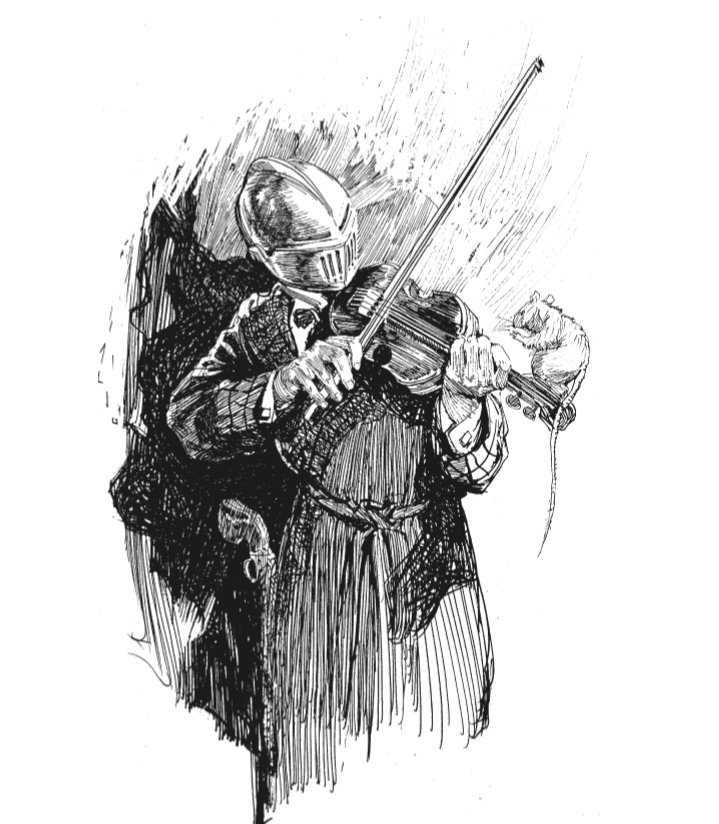 Benedict is an occult detective. He is a mysterious figure, never to be seen without his suit of armour. He moves in the shadows supported by his accomplice Lawrence St George. In the Monstermen and Other Stories, the Corpus Monstrum are engage in five adventure. In Silent as Grave the two investigate the disappearance of a famous actress who is working on one of St George’s horror films. Together they pursue the deviant Crulk, who has forged dark alliances with a demonic fiend. The investigation embroils the journalist Sunset Lane, who becomes a recurring figure across the stories in the collection. Autopsy in B Minor sees Lawrence St George relate a harrowing experience to Benedict as they explore an old tomb. St George’s tale of pirates and slimy tentacle creatures is the inspiration of his most recent film and a reminder to Benedict of the threats to humanity. A Gift for the Wicked sees Benedict and St George try to stave of some misbehaved and troubling children. While after a visit from the increasingly twisted and deformed Crulk, The Skull and the Snowman sees Benedict and St George venture to Tibet where they once again encounter Sunset Lane and a famed and misunderstood creature. Together they must face down the powerful Gooseflesh and his minions. O Sinner beneath Us is the final Corpus Monstrum tale. In it, Benedict further indoctrinates Sunset Lane into the traditions of the Corpus Monstrum. Her transformation from fluffy entertainment journalist to occult detective is almost completed. Accompanying the Monstermen stories are five classic scary stories that have been lovingly illustrated by Gianni including “The Gateway of the Monster” by William Hodgson and “Old Garfield’s Heart” by Robert E Howard. There is a brief introduction by Michael Chabon. 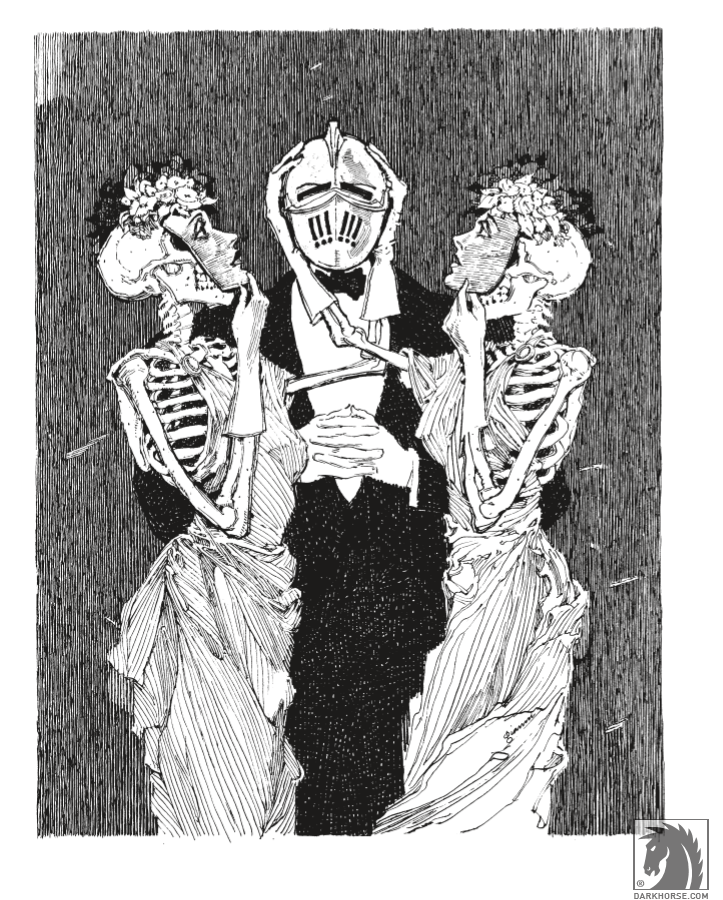 The Monstermen and Other Stories is a beautiful book. Gianni’s illustrations hark back to the golden age of comics and the classic etchings that would accompany early volumes of gothic tales. Giannis sharp and clear lines and detailed cross-hatching bring his dark world to life in all its ominous and dark glory. Gianni’s most well-known for his work on the long running Prince Valiant comic strip from 2004-2012. He has also illustrated reprints of works by Robert E Howard (creator of Solomon Kane and Conan) and Jules Verne amongst many others. This wealth of experience shows in the careful composition of each panel. The details and action are always crisp and clear, regardless of what monstrous chaos the story has bought forth. Gianni’s experience as a court sketch artist is present in some of the full and half page illustrations of the cast – including a wonderful full page portrait of Benedict in his glorious 16th century trademark helmet and visor. Scenes burst with detail or crowd in on the reader in darkness – accentuating the excitement and fear, or both. Gianni’s understanding of plot and setting allow him to transition from the traditional cell by cell narrative to let the action crash across the page or descend into the depths of madness and terror seamlessly. Each page of The Monstermen is a pleasant visual feast! 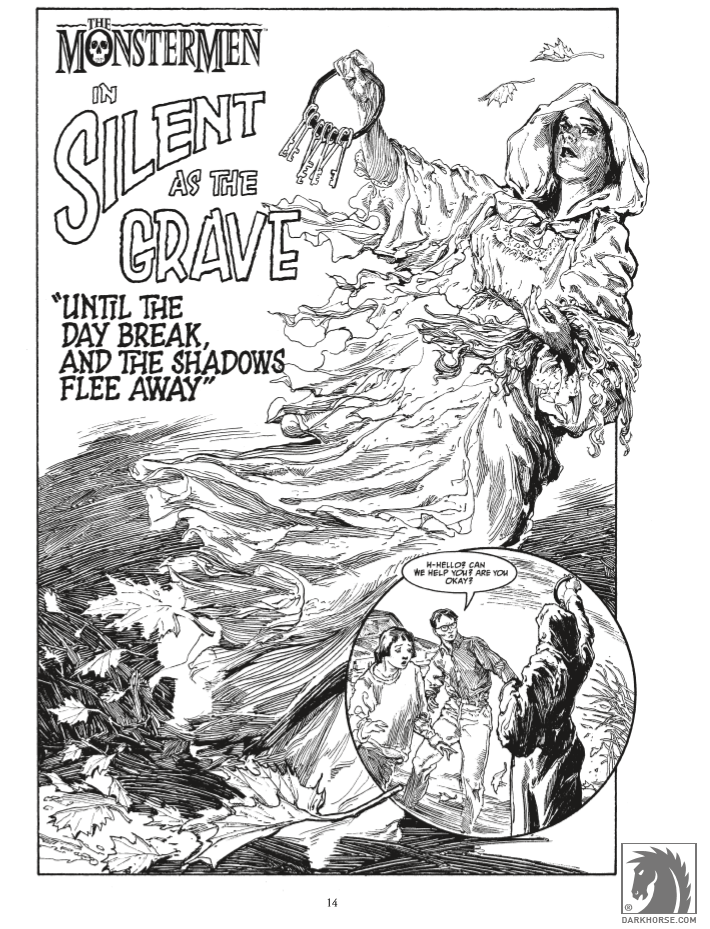 Gary Gianni’s The Monstermen and Other Stories is an excellent collection of stories. The illustrations are great and the stories are a lot of fun. The worst thing about the collection is that it ends. Unfortunately, this collection is the entirety of the Corpus Monstrum’s adventures. This does not detract from the quality of the stories, but it is a fair warning that this collection will wet your palette for more of a precious commodity that does not exist. I really wanted to see Sunset Lane’s character develop and become a leading force as she was immersed further and further into the other worldly horrors Benedict and Lawrence St George involved her in. At times, she feels like the least realised of the characters. Her role in Silent as the Grave is pivotal, but she feels underutilised in her other appearances. It’s good that Gianni has provided such a motivated and real woman given the period setting, it’s just a shame to see her as the eternal sidekick.

While the collection of classic stories that conclude the volume are good (they are after-all classics), they lack the fun and swashbuckling adventures of Gianni’s own horrors that precede them. If you loved Hellboy or need a good dose of occult mystery and adventure in your life, then rock down to your LCS and grab yourself a copy when this comes out.