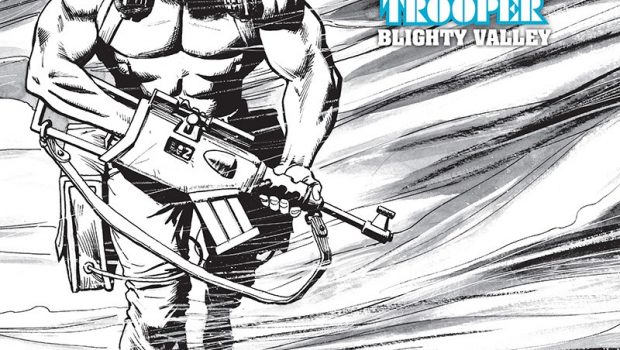 The acclaimed co-creator of Preacher and The Boys returns to the Galaxy’s Greatest Comic with ‘Blighty Valley’, a brand new story with art byJudge Dredd and Sniper Elite artist, Patrick Goddard.

It follows Ennis’ return to British comics with the one-off revival of comedy strip Bonjo From Beyond The Stars in 2000 AD’s Christmas issue, which featured the last comics work by the late great Kevin O’Neill, and his scripts for Battle Action, the bestselling hardcover anthology reviving classic comics war series from the 1970s. 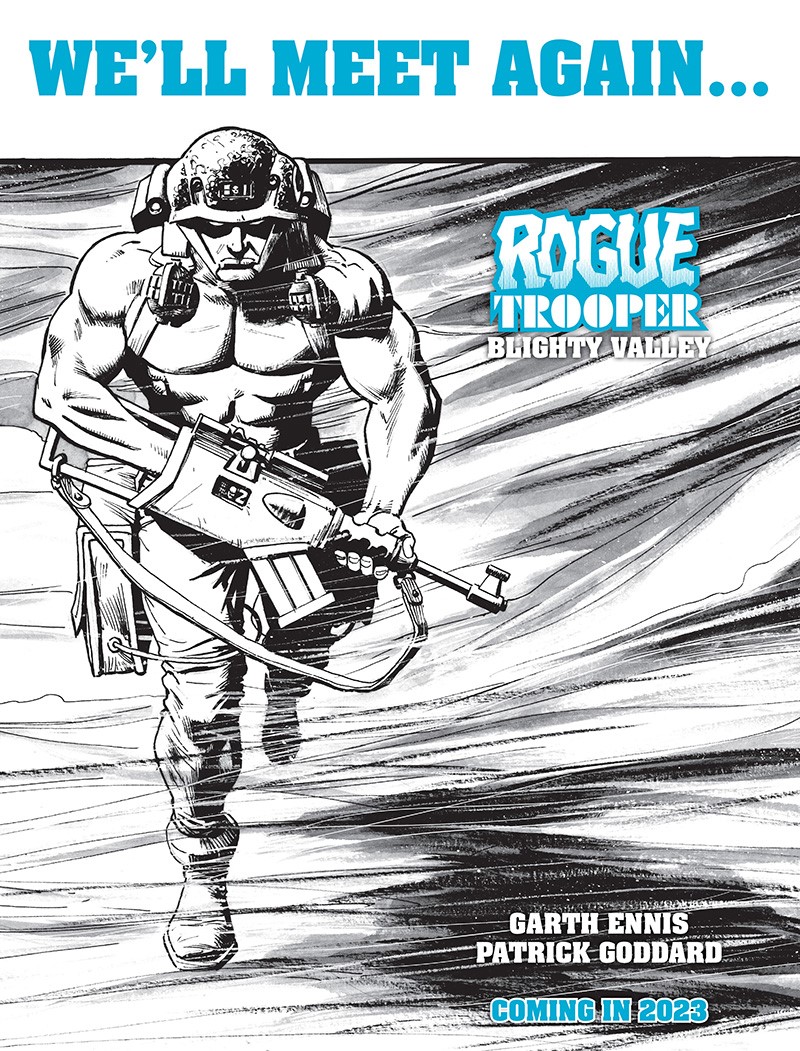 The new 13-episode story begins in 2000 AD Prog 2326, which will be on sale on 5 April in the UK – through newsagents, comic book stores, and the 2000 AD webshop and app – and in North America through Diamond Distribution in July.

Created by writer Gerry Finley-Day and artist Dave Gibbons, and debuting in 2000 AD in 1981, Rogue Trooper is the last of the G.I.s – Genetically-engineered Infantry designed to survive the poisoned and war-torn world of Nu Earth. Betrayed by his own side, he is a lone warrior stalking these blasted lands in search of the notorious Traitor General,  accompanied by his dead comrades- their personalities encoded on ‘bio chips’ and inserted into his equipment.

In this new tale, Night’s Horizon is the period two weeks out of every year when Nu Earth’s orbit carries it closest to the black hole. The Norts call it Zvartchvintern; the first settlers knew it as Lightfall. Things have a reputation for going a little… screwy around this time. Now, Rogue Trooper is about to experience those effects first-hand…

Garth Ennis said: ‘For me Rogue Trooper is as vital a part of classic 2000 AD as Judge Dredd, Strontium Dog, Robo-Hunter, Nemesis the Warlock, or Sláine, and I well remember wandering the wastes of Nu Earth with Rogue and the bio-chips on their hunt for the Traitor General. The stories that instantly come to mind are ‘All Hell on the Dix-I Front’, ‘Fort Neuro’, ‘Eye of the Traitor’, ‘You Only Die Twice’ and ‘To The Ends Of Nu Earth’ – I hope ‘Blighty Valley’ will prove a worthy successor to such unadulterated gems.’

Matt Smith, editor of 2000 AD said:‘Garth Ennis has written classic 2000 AD characters before, but this is the first time he’s scripted Rogue Trooper. As you’d expect from someone steeped in war comics, his take on the G.I. is powerful, thrilling and explosive. With Patrick Goddard providing the stunning visuals, this a dramatic, unmissable addition to the Nu Earth saga.’

Rogue Trooper is the subject of the forthcoming movie by Duncan Jones, the critically-lauded director of Moon, Source Code, Warcraft and Mute write, in a joint venture between Liberty Films and Rebellion, the Oxford-based games publishers and owners of 2000 AD.