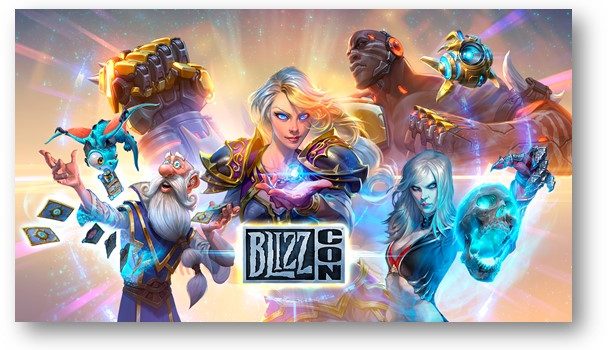 Gamers from around the world gather for gaming, esports, and more this week at BlizzCon 2017

This Friday, 3 November PDT and Saturday, 4 November PDT, gamers from around the globe will gather at the Anaheim Convention Centre for a weekend filled with Blizzard gaming news, events featuring players’ favourite community personalities, epic esports tournaments, contests spotlighting cosplayers and other talented creators, a performance by Grammy Award–winning band Muse, and much more. While tickets to the convention are sold out, anyone can join the party online with the BlizzCon Virtual Ticket.

“The community is the heart of Blizzard’s games, and BlizzCon is our favourite way to connect directly with our players and geek out over the things we’re passionate about,” said Mike Morhaime, CEO and cofounder of Blizzard Entertainment. “We’ve worked hard to make this our biggest and best BlizzCon yet, and we’re looking forward to seeing everyone this Friday.”

BlizzCon will be a can’t-miss destination for gamers everywhere, packed with an array of activities, events, exciting announcements, and more:

The BlizzCon festivities officially begin Friday at 11 a.m. PDT (4 Nov, 6 a.m. AEDT/ 8 a.m. NZDT) with the opening ceremony, where the world gets the download on Blizzard’s latest development plans. For the first time, attendees can watch developers presenting live on three different stages—the Mythic stage in Hall D, the Overwatch Arena, and the Hearthstone stage in the new North Hall—and everyone can watch free online at BlizzCon.com. Tune in early at 10:30 a.m. PDT (4 Nov, 5.30 a.m. AEDT/ 7.30 a.m. NZDT) for the free BlizzCon All Access Channel preshow to kick things off.

Experience four stages of live game and community content. Learn what’s in store for your favourite Blizzard games in developer discussions; connect with your favourite online personalities in an array of activities such as live podcasts and Blizzard-themed game shows; and get in touch with your inner creator at sessions featuring live art demos, cosplay tips, engineering workshops, and more. See the complete schedule at www.blizzcon.com/schedule.

For the first time ever, all four stages will be streamed live online for people watching with the BlizzCon Virtual Ticket, and VODs will available in English, French, German, Russian, and Korean. Before the show begins, gamers can get in the BlizzCon spirit by watching more than 40 pre-show videos (many free; all included with the Virtual Ticket) at www.blizzcon.com/watch.

Cheer On Your Favourite Esports Players

All weekend long, the spirit of competition fills the convention centre as the final rounds of the World of Warcraft® Arena World Championship, Overwatch® World Cup, StarCraft® II World Championship Series, Heroes of the Storm® Global Championship Finals, and Hearthstone® Inn-vitational play out. Esports fans can also psych themselves up for the inaugural season of the Overwatch League with a special kick-off event on Saturday at 5:30 p.m. PDT (5 Nov, 11.30 a.m. AEDT/1.30 p.m. NZDT). Visit www.blizzcon.com/esports for more information on this year’s tournament programming.

All of this weekend’s Blizzard esports action is available to watch for free on BlizzCon.com, Twitch, and MLG.com. Virtual Ticket holders can enjoy an enhanced esports viewing experience when watching on BlizzCon.com or in the BlizzCon Mobile app.

Geek Out at Community Night—Hosted by Chris Hardwick

On Friday at 6 p.m. PDT (4 Nov, 12 p.m. AEDT/2 p.m. NZDT), get ready for an evening of legendary community creativity with the BlizzCon 2017 costume, talent, movie, and art contests. This year’s Community Night will be emceed by Chris Hardwick, founder of Nerdist and host of NBC’s hit game show series The Wall, returning for his second BlizzCon.

Close Out the Weekend with Muse

Get ready for an epic finale—Grammy Award–winning band Muse will be performing on Saturday night at 6:30 p.m. PDT (5 Nov, 12.30 p.m. AEDT/2.30 p.m. NZDT), giving everyone at the show and watching online a stage-shattering send-off.

Explore an Array of On-Site Activities

Everyone attending in person can explore a variety of events and activities throughout the convention centre. Surprises await around every corner, and highlights include:

BlizzCon is made possible in part by the generosity of the event’s sponsors, who help provide hardware, peripherals, and other support for the show. This year’s sponsors include Cisco, DXRacer, and Intel, along with the following partners who’ll be hosting activities for attendees at booths around the show floor:

Although BlizzCon tickets have sold out, viewers can still join the excitement from home with the BlizzCon Virtual Ticket (AUD $49.95), which offers comprehensive live online coverage of both days of the event—including Community Night on Friday evening PDT and Muse’s performance on Saturday PDT. Virtual Ticket holders will also receive a treasure trove of bonus in-game items for World of Warcraft, Overwatch, Diablo III, Hearthstone, Heroes of the Storm, and StarCraft II.

Attendees and Virtual Ticket viewers alike can download the BlizzCon Mobile App, available free for Android and iOS devices, and use it to plan their weekend, map a route through the convention centre, and even watch live streams.