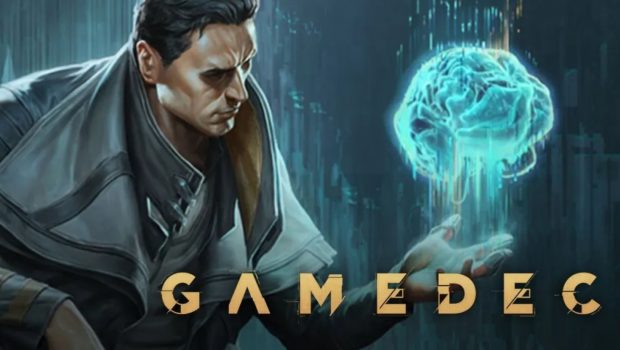 Summary: A really grappling and interesting experience for any cyberpunk or Disco Elysium fan. In many ways, Gamedec is a love letter to this genre of games and stories, while keeping some of its less than stellar qualities both narratively and gameplay-wise. While the Switch port could be frustrating to deal with, the convenience of being able to pick up the game like a book and read through it was a really unique experience that I kind of wish more visual novels adopted.

Gamedec is a single-player non-combat cyberpunk isometric RPG from Anshar Studios. Set in a dystopian world, where everyone prefers to escape to the digital and live out their most fascinating and primal fantasies. You play a game detective, sharing the name of the game, a Gamedec, who solves crimes inside virtual worlds. Throughout the game, you will be using your wits to gather information from talking to the many unique and varied NPCs to get to the bottom of deceptive schemes, save lives, and investigate the extraordinary relationships between virtual worlds and their inhabitants. The world of the game is a big blend of Phillip K Dick, specifically Bladerunner and Minority Report, mixed in with Disco Elysium and Sherlock Holmes. If you’re a fan of hard sci-fi and visual novel experiences, you will love this game.

You wake up just like any other day. With a cup of coffee, staring out the window and delivering exposition about the political landscape and social dystopia that is this games world. The story and themes of this game are really heavy-handed and dense. When you start the game, you are not slowly introduced to the world or its inner workings. Instead, the game opts to dump a lot of exposition to explain the world and its rules to you, and then take you to your first quest. This is very similar to how Phillip K Dick would start a lot of his short stories, although you can handwave this by rationalising it as a homage. I personally wish there was a more organic way they could have delivered the exposition or at least, found a way to split it up a bit more.

You get a call from the CEO of a company. His son has been stuck inside a virtual world for 4 days and his friend has only recently woken up. There is a mysterious girl involved as well. As you play along, the relationships between the son and father are revealed, how the power fantasy of the virtual world can fuel the darkest of someone’s innermost desires and how religious cults are formed to rationalise them. The starting exposition felt very detached from this setup, which meant I had to go back and crawl through multiple codex entries for over half an hour to understand my place in the world, why gamedecs are important, and how the world feels about them. Some are sceptical or ambivalent, while others are in awe which confused the role of a gamedec within the world.

If you aren’t too familiar with the cyberpunk genre and its many tropes, you will feel a bit lost. If you really love cyberpunk stories, this game will be great for you. Personally, as a mild fan of the genre, I felt the game was a bit too in love with itself at times and its story, which made it difficult to buy into the world as I felt like I had to already have that connection to the genre to really buy into it. The game also uses a lot of video game kind of slang in a way that feels a bit forced and cringey. Like how cool you are to discover glitches, and to be a gamer. It would remind me of a Ctrl+Alt+Del comic at times with how over the top the gaming rhetoric could be, where at times I wondered if the game was critiquing it. However, the game does go to lengths to explain why it would be dystopian to choose to live in the fantasy world and the dense infrastructure and social issues that would arise in a world that values the digital world more than the real world.

This game really values multiple playthroughs to really give the player fresh air in understanding everything. It can feel very jarring and offputting at first in my opinion, but after a first playthrough when things eventually tied together, I started to understand what the game was going for more clearly. A second playthrough would help in digesting all the initial worldbuilding thrown at you, and in understanding what a gamedec actually does. Much like Disco Elysium or old 90’s point-and-click games, Gamedec is purely non-combat. Similar to Disco Elysium’s personality traits, Gamedec has you choosing certain dialogue options to earn skill points, which you can then invest into future dialogue paths to reveal new information. You’ll also spend time interacting with the overworld of the game, completing small puzzles to earn extra skill points or reveal extra information.

The dialogue is varied and filled with plenty of different options to allow you to characterise your character as unique as you would like. However, due to needing to pick certain dialogue options to earn certain skill points, you will have to bargain on how you want to react versus how the skill point wants you to react so you can invest in a specific perk. This can be an encouraging motive to suggest to players the many opportunities multiple run-throughs can provide. 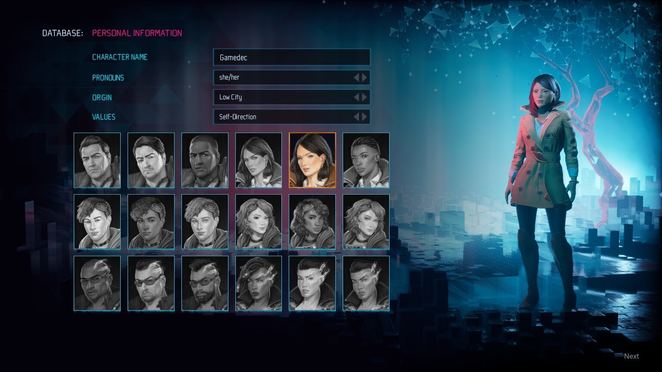 The games aesthetic shines in its 2D assets and use of lighting. Each character has an incredible 2D sprite, which is greatly characterised through specific fashion or aesthetic choices, which also serves as great worldbuilding. The character models themselves however unfortunately look like a Playstation 2 game and kinda blend into a visual mush where they don’t really stand out for any reason. Personally, I can handwave this as you spend most of your time looking at sprites and the UI of the game is visually stunning enough to make up for this. The game manages to make menus and dialogue options appealing to look at, which works really well for the Switch. 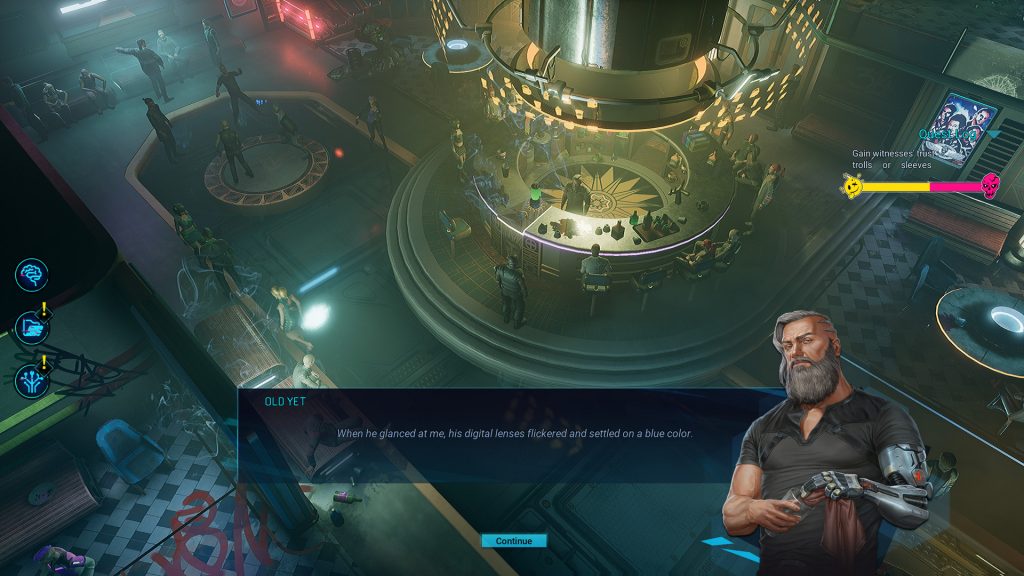 The Switch doesn’t do too much to elevate any aspect of the original game. Load times are rough here, and you will spend a lot of time waiting for things to load for instance on starting a playthrough, the Switch took over 2 minutes to load up into the game. Framerate drops happen often by just clicking onto objects to interact with. Menu’s are also very clunky to navigate through. Because the game is built around a PC point-and-click genre of gameplay, the Switch controller struggles to make navigating the menus. Even interacting with objects does not feel intuitive, and will take a while to adapt to. A lot of my time with this game was spent positioning my character in an awkward space to line up the right box to interact with the right character or object. It’s very similar to playing Dragon Age: Origins or older Bioware games ported to the console. Not having the ability to manually put your cursor over objects makes for a really clunky system here. I would have really liked for the touch screen component of the Switch to be utilised more to fix this, though to my knowledge that option does not exist at this current moment. 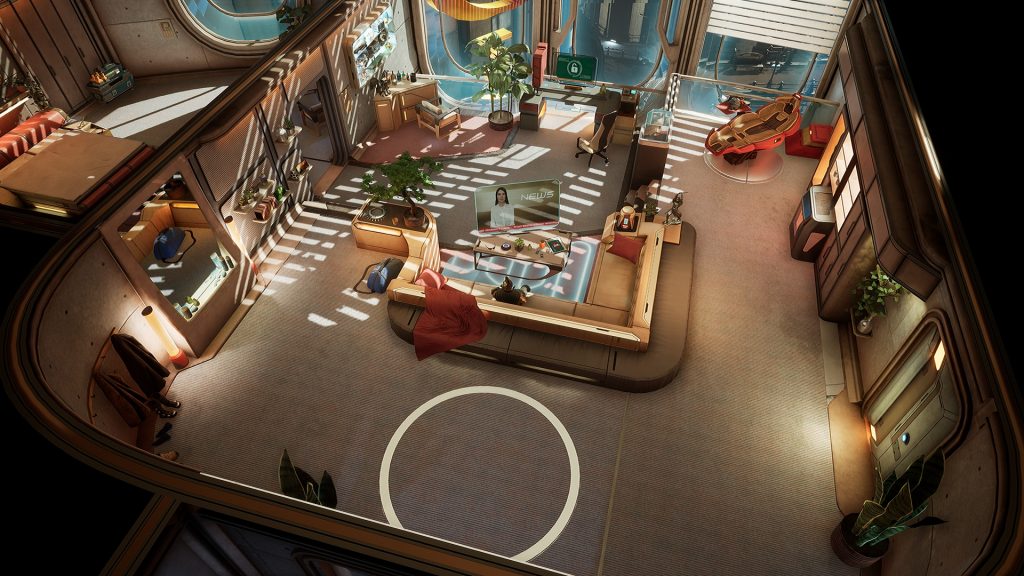 A really grappling and interesting experience for any cyberpunk or Disco Elysium fan. In many ways, Gamedec is a love letter to this genre of games and stories, while keeping some of its less than stellar qualities both narratively and gameplay-wise. While the Switch port could be frustrating to deal with, the convenience of being able to pick up the game like a book and read through it was a really unique experience that I kind of wish more visual novels adopted. 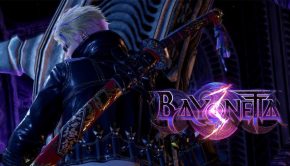