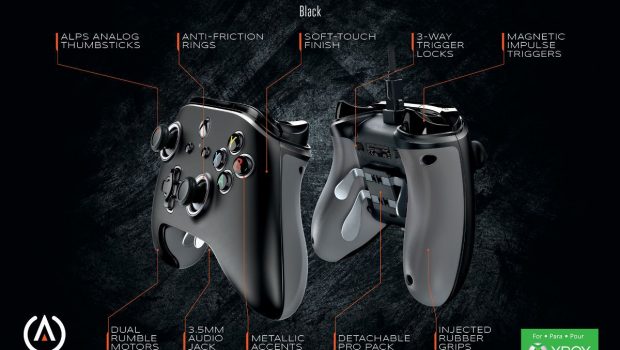 Summary: This controller is such a powerful tool and a must-have for any serious Xbox One gamer!

For a while now, I’ve been contemplating saving up for a new controller for my Xbox, namely, their premium Xbox Elite Wireless Controller. The appeal of being able to customise my controller not only visually, but also having the power to program additional buttons for my needs is very compelling. However, as someone on a budget, forking out $250 for a gaming controller does not sit very well with my wallet. Thankfully, there is a much more affordable option and, quite arguably, an equally powerful controller available: The Fusion Pro Wired Controller by PowerA. The Fusion Pro has many of the features offered by the Xbox Elite controller but with a significantly smaller price tag. Additionally, this controller is an officially licensed product, meaning that it has been built and approved for the Xbox One.

The first thing I noticed when unboxing the controller is just how sexy this thing looks. Yes, an odd comment considering it only comes in black or white, but true none the less. The controller comes with an immaculate matt black, smooth touch panel on the top that can be removed to swap out the joysticks for ones that sit up higher as well as changing the metallic rings that sit under them. Unfortunately, the Fusion Pro only comes with the option to swap out the rings on the joysticks, leaving the D-pad and A-B-X-Y buttons all remaining the default silver colour. While this may bug some people, for me, the alternative metallic green rings add a nice level of contrast to the overall design. The underside of the controller is fitted with a set of charcoal grey, micro-textured rubber grips. This, and the smooth black finish on the top of the controller, makes for a very comfortable and visually appealing hold. However, this controller is noticeably heavier than the standard Xbox controller. Whilst it may not seem like much, the Fusion Pro comes in 75 grams heavier than the default Xbox controller. 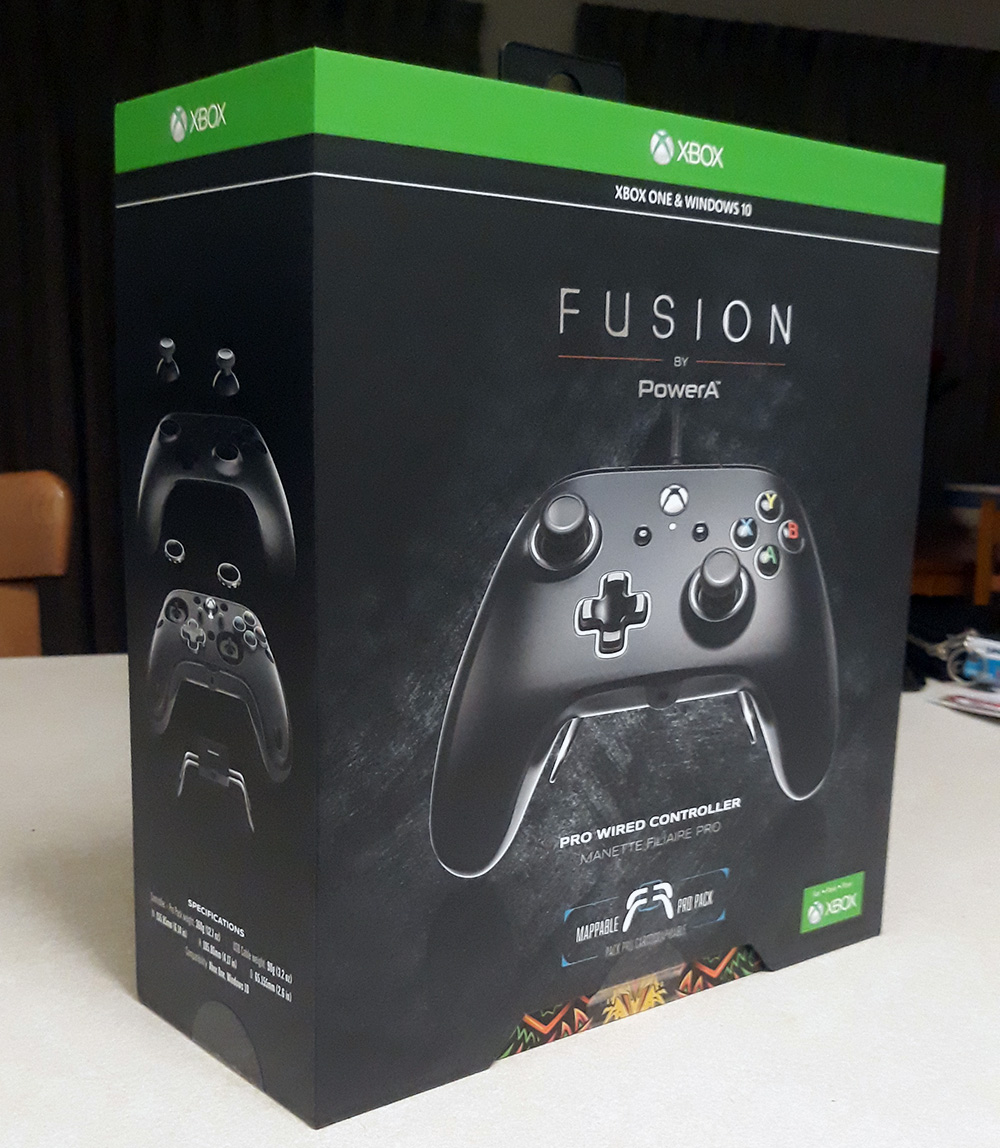 One thing I’d like to point out for anyone looking at buying a Fusion Pro is that it is a wired controller and has no battery pack of its own. While the Xbox Elite Controller is fully wireless, having a wired connection does come with noticeable benefits, mostly in the price. For me, if saving $100 meant having a wired connection, then I wouldn’t see an issue, especially if it meant saving money on buying AA batteries each month. The amount of money that I spent on batteries alone for my default Xbox controller was enough for me to spend $50 on a rechargeable battery pack docking station. So, rather than using batteries, I sit my controller on a docking station each night to recharge the batteries. If I don’t place the controller on the docking station correctly, the battery wont charge, thus leaving me with flat batteries yet again. The point I’m trying to make is that the $50 I spent on that charging station is the same price difference as a normal controller and the FUSION Pro. Think about it; for the same amount of money that I spent on getting a Xbox controller and finding a solution to keep it powered, I could have had a controller that not only improves my gaming ability, never runs out of power and has all the functionality as something that would cost as much as $100 more. I think it’s safe to say that having a wired controller might be a good move for anyone who sits within a few meters of the screen and doesn’t want to fork out extra money on batteries.

Considering the price of this controller is roughly $50-$60 more than your stock standard wireless controller, I decided to make a point of putting this device through its paces. To be thorough, I played a wide range of different game genres just to see how much the Fusion could improve my skill. While playing each game, I thought about how other gamers would use this controller and customised it accordingly. Changing the Fusions button layout, both physically and electronically is a very easy and lightning fast process that can even be done during game play. A small button on the underside of the controller makes mapping the paddles quick and easy. The triggers can each be adjusted individually using a set of small toggle switch located under the buttons.

In this game, I mapped the extra buttons to the D-Pad. The front two buttons became the up and down, and the rear ones where left and right accordingly. In the game, those buttons are mostly used for secondary functions such as drone controls, navigation, and changing visuals. By mapping my controller this way, I was able to quickly change between night vision during fire fights and dominate the battlefield in close quarter combat situations. The buttons made it easier to navigate without having to take my fingers off the trigger during standoffs. Definitely a vast improvement for any FPS/3PS gamer.

For this game, I removed the back two paddles and adjusted the tension of the two triggers to medium sensitivity. I also mapped the front two paddles to the trigger buttons as well. This gave me the ultimate configuration for driving my beloved (2014 Local Motors) Rally Fighter. The car suffers from extreme over revving on take-off so, by having the two triggers reduced in how far back they can be pulled, I was able to get a perfect takeoff every single time. But the really beauty of this controller came out when I used the two front paddles as full, unrestricted acceleration. Once I got to 2nd/3rd gear, I would swap to the paddles for full throttle, leaving the two triggers in reserve for more controlled braking and acceleration coming in and out of turns. My Rally Fighter has never handled so perfectly in its entire life! God, I love that car!

This game is probably one of the best environments for the Fusion Controller. The ability to map your weapons to a set of four much more accessible buttons gave me a huge advantage during gameplay. For me, being able to keep my fingers on the triggers for acceleration while still being able to aim and shoot made all the difference. It did take a little bit of getting used to but in the end, it really paid off! 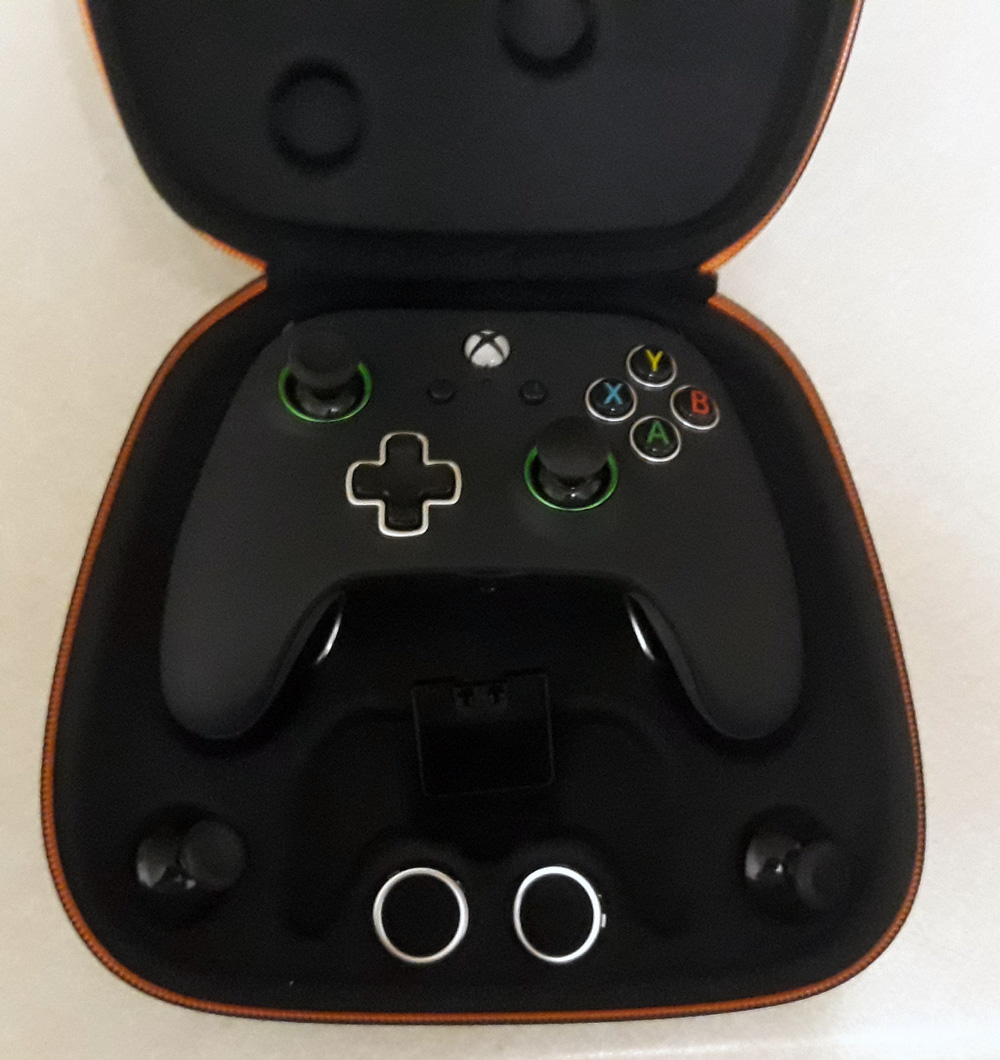 The FUSION Pro Wired Controller by PowerA is a perfect choice for anyone who has been thinking about either getting a new controller or upgrading to the Xbox Elite Controller without having to spend too much. While I was unsure about how a 3rd party device would handle, I was pleasantly surprised in both its design and handling. This is a controller that has clearly been built with gamers in mind. It will take a little bit of getting used to but the customization options are well worth it. I would easily recommend this to anyone from the ages of 14-16 and upward who play games on at least a regular basis.