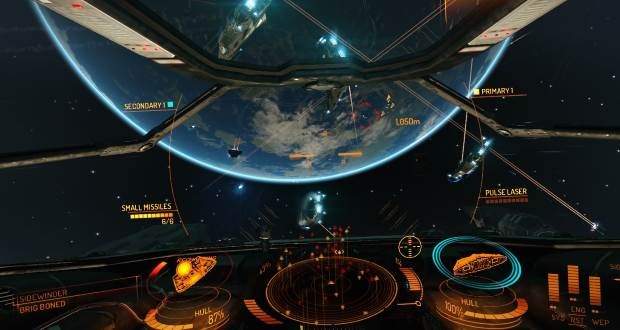 Play Elite: Dangerous first on console on Xbox One, and get new content first on Xbox One.

Elite: Dangerous is the critically acclaimed, award winning third sequel to the genre-defining Elite, created in 1984 by David Braben and Ian Bell. Elite: Dangerous brings gaming’s original open world adventure into the modern generation with the entirety of the Milky Way re-created at its full galactic proportions, an evolving player-driven narrative and fully connected multiplayer experience.

Starting with only a small starship and a few credits, players do whatever it takes to earn the skill, knowledge, wealth and power to survive in a futuristic cutthroat galaxy and to stand among the ranks of the iconic Elite. In an age of galactic superpowers and interstellar war, every player’s story influences the unique connected gaming experience and evolving narrative. Governments fall, battles are lost and won, and humanity’s frontier is reshaped, all by players’ actions.

Elite: Dangerous Game Preview for Xbox One offers the full game at 1080p, with new controls optimized for gamepad, Achievements, and full support for Xbox One Parties and Friends Lists.

Elite: Dangerous adds Close Quarter Championships in July as part of the Xbox One Game Preview Program. Play CQC first on Xbox One.

Elite: Dangerous is available for PC, Mac and Xbox One. For more information hit EliteDangerous.com