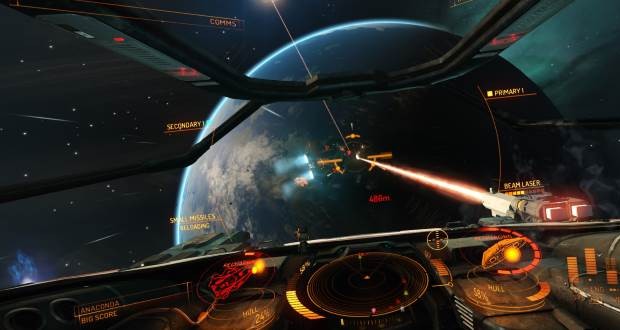 Elite Dangerous: Horizons’ Planetary Landings expansion introduces players to planet surfaces and the new Surface Recon Vehicle (SRV) ‘Scarab’. Scanning worlds will reveal all-new surface gameplay opportunities as players detect signals, crashed ships, mineral deposits, outposts and fortresses, and embark on raids on the surface. Playing alone, or with friends on the ground and in the skies above, players can explore, mine, engage hostile forces and attempt to infiltrate strongholds guarding valuable rewards.

The 400 billion star systems of the Elite Dangerous galaxy are all created with a sophisticated simulation that re-creates the Milky Way in exacting detail, and that simulation continues to the surfaces of worlds. Players will seamlessly journey from space to surface, coasting over mountaintops, diving into canyons and venturing out on the ground in the SRV, without loading screens or breaks in gameplay.

Elite Dangerous: Horizons’ second major expansion will arrive in Q1 2016, introducing a new loot and crafting system to the Elite Dangerous galaxy along with other features and gameplay additions to be announced later this year. Further updates will continue into 2016.

Elite Dangerous: Horizons will launch Holiday 2015 for PC and is available for pre-order now. Mac and Xbox One announcements will follow.

CQC coming to PC, Mac and Xbox One in September

Instant-action PVP will come to the Elite Dangerous galaxy on all platforms in the Close Quarters Combat Championship. CQC is the ultimate 34th century gladiatorial contest between Elite Dangerous pilots, thrusting players into intense PVP action in custom-built arenas set within the Elite Dangerous galaxy. Equip a unique loadout on your Sidewinder, Eagle or new Federal Fighter craft and earn XP to unlock new weapons, modules and abilities in the race to Elite.

The CQC game update will be available in September, followed this Holiday by another major content update for all Elite Dangerous players. ‘Ships’ will bring the total number of spacecraft to over 30, and will prepare the game for Elite Dangerous: Horizons.