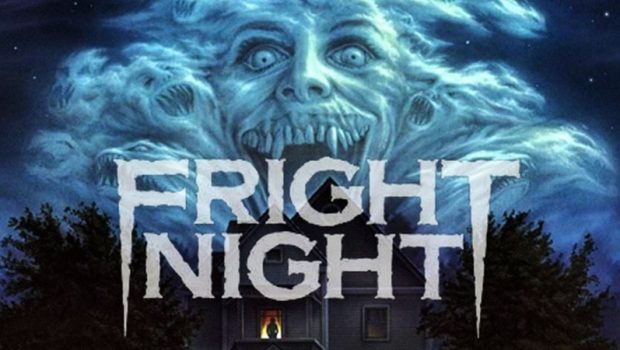 Summary: Get your teeth into this camp classic!

In 1989, Tom Holland’s Fright Night terrified me, gave me nightmares, and generally made my parents regret letting me near a Video Ezy with their card and apathetic store attendants. I loved it. I was already enamoured of horror and was happy to get my hands on anything remotely terror-related or potentially nightmare inducing. So, when the Cinema Cult Bluray edition of Fright Night turned up in my mailbox for review I was overjoyed and quite excited. Yes! It still scares! It still holds up, watch after watch.

Fright Night is a uniquely 80s flick. It marries a retelling of Bram Stoker’s Dracula with 80s pop-culture, the 80s American gay panic, a fear of contemporary liberal values, and Hitchcock’s Rear Window. It tells the story of Charley Brewster (William Ragdale), a typical suburban teen. He’s got a wonderful beautiful girlfriend – Amy (Amanda Bearse), a single mother who busts her hump trying to provide for him, and a few friends who look up to him, and a pretty serious horror film addiction [I feel his pain]. In short, he’s got everything.

Everything, that is, until a charming and hip vampire with fabulous 80s fashion sense (Chris Sarandon) moves in next door and starts knocking off local beauties and sex-workers and he sees too much. Things go south pretty quick from there.

Fright Night is wonderfully meta and charmingly camp. It also has some fantastic practical effects and holds up wonderfully today, far better than many CGI heavy films. The tone of the film mixes teen horror and humour with some gut-punching pathos. Holland opens the film with a make-out scene and a missed opportunity for a popped cherry, keeping it light. But then, what follows is a far more mature and contemplative study of relationships, fights, and desire. 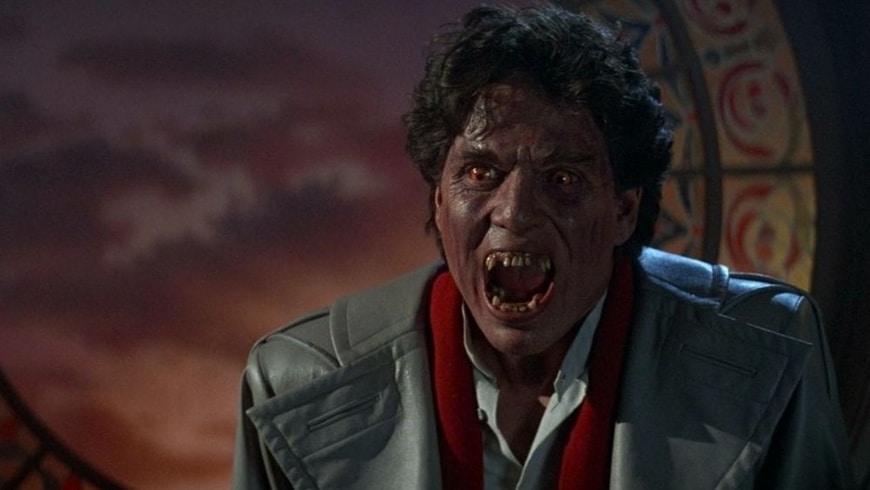 Charley Brewster, the young protagonist, is a bit of dick. And Ragdale conveys his entitled childishness with aplomb. He’s a kid who has everything and appreciates nothing. He mistreats his friends – constantly teasing Evil Ed (Stephen Geoferrys), he takes the wonderful Amy for granted. He’s too concerned with the world around him to really appreciate what is literally in his lap. So, what happens to him is kind of deserved. He faces a real risk of losing his girlfriend, heart and soul.

There’s a contemporary message here that differs from the story of Jonathon and Mina Harker. The Harkers had a different sort of naivete. Amy was chaste, Jonathon was caring and devoted. Charley is self-absorbed and Amy is growing in confidence. And her growing independence is something that sets her apart as a character, and Fright Night as a film, from its contemporaries. Holland creates a female character in his debut that is more real than anything Hughes produced in his career.

The performances are fabulous. Sarandon is over the top as the debonair and hip vampire next door, Jerry Dandridge. Amanda Bearse plays a demure and conflicted teen Amy, but also a vampish young woman with a mix of camp and sass. Geofferys is totally off the hook as Evil Ed, flitting between nerd, maniac, and scared kid without missing a beat.

But it’s Roddy McDowal as Peter Vincent who in many steals the show. Playing a Van Helsing character clearly modelled off Vincent Price (Holland wrote the part for Price, but Price was refused after terrible typecasting only returning to horror to play the creator of Edward Scissorhands) and Peter Cushing, luminaries of the Vampire genre, and the late night horror show hosts of the 80s like Price and the inimitable Elvira, McDowal brings Captain Peacock to the vampire slaying party. And he rocks it fabulously!

The practical effects are ace! This was Richard Edlund’s first film after Ghostbusters. The mix of matte background effects and prosthetics is captivating, and at one point incredibly moving in the same way John Landis’American Werewolf in London is. The prosthetic transformations of Dandridge and Evil Ed are great, from the small details of dirty long fingernails to full-body melts. 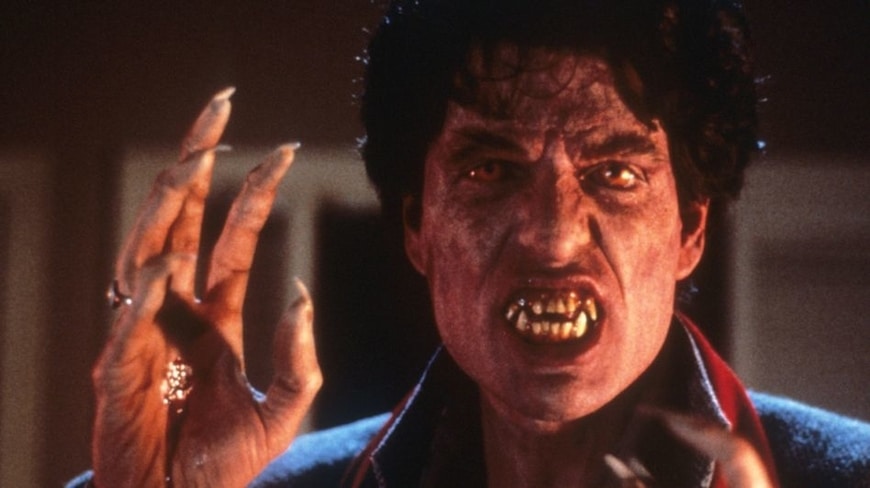 But Fright Night is like many of its peers and has aspects that don’t hold up well in a contemporary viewing.

Jerry Dandridge dials up the queer fear of vampires to 11. He lives with a man, wears some sharp fashion, and redecorates old homes. Oh, and the name puns on Dandy, get it?! He’s clearly not a red-blooded American 80s male. His flippant and fluid sexuality (it has to be, he’s fashionable. Right?) lures young boys and girls to their deaths. The clearly bisexual guy has to be stopped by the red-blooded male who happens to like whacking off to porno mags and vouyering into his next-door neighbour’s windows to bring safety and security to middle America. It’s fun, in its way, but it also leaves a bit of a bitter taste. 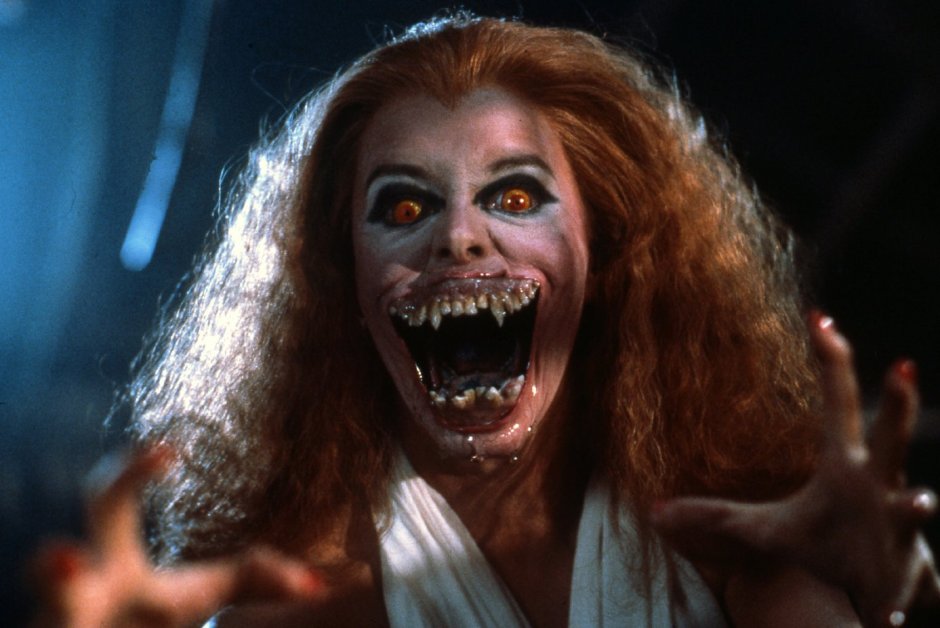 Similarly, Amy starts off as a headstrong and fully independent woman and gets tamed, twice. She’s all feist and confusion in the opening scene. Scared of sex but desiring it. But by the third act, the fire is dampened and she’s merely a prop or object for the two leading men. They fight over her, and byt the end of the film her fiery gusto has fizzled.

I have to admit, this Bluray release was a disappointment. I do love this film. For all of its issues, it’s a hell of a progressive film for its time. Peter Vincent is such a great character, and his obvious influencesare themselves such significant figures in cinema that you’d hope they’d make this aspect of fright Night into some sort of special feature or doco. But, alas, nothing. NO original trailers. No pictures. No special features. It’s drier than a blood bank after Draclua has been to town.

The film transfer is serviceable. It looks okay, if a little grainy, on an HD TV. The audio is good, but Evelyn “Champagne” King’s Give It Up lacks the sensual grind it should have on the dancefloor between Jerry and Amy. 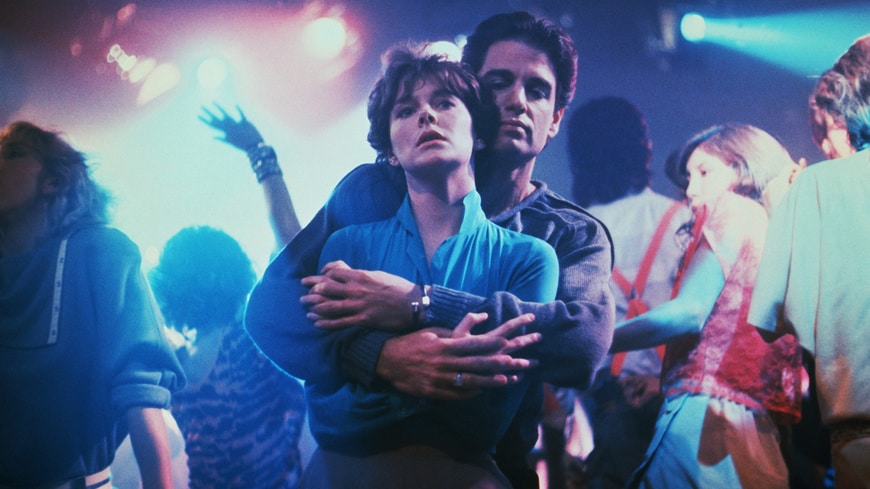 In my opinion, this is a classic film that, despite some flaws, is still wonderful and well-made. It deserves a better re-release though. Want a good date night flick? Put a stake in it, watch Fright Night!