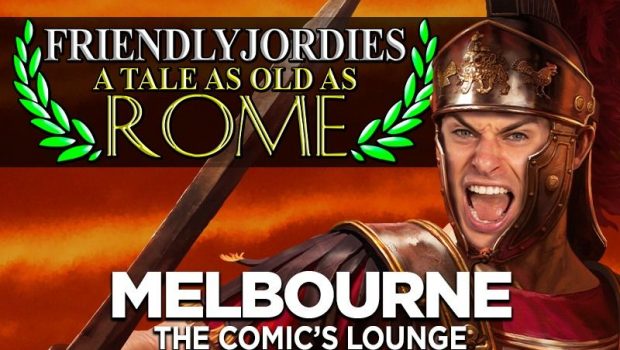 Friendlyjordies Live – A Tale as Old as Rome (2022) Review

Summary: There is an idea of a show here that may have been good but it is crushed under the weight of Friendlyjordies' massive ego.

Having enjoyed Friendlyjordies previous shows in 2019 and 2021 I was looking forward to this show and I have to be honest that I was disappointed with it. There is an idea of a show here but it is lost in a disjoined mess and two many attacks on people Jordan Shanks does not personally like.

Doing the “I’m stupid” voice on quotes from people you don’t agree with is just too easy a joke and even Media Watch does not do it as much these days.

The entire conceit of the show is that Julius Caesar has been hard done by the history books and even until this day due to him wanting to stand by the common man against the ruling elite. Well it is there but it is hidden under a pile of rants, Von Dutch hat references and Friendlyjordies getting his cock out.

This is meant to be a passion project for Friendljyordies but I am not seeing it, he didn’t do enough to bring the audience along with him and show them why we should care about it as much as he does.

I had not really heard of the Julius Caesar is a genocidal maniac argument before, even a quick look at the figures would disprove this

There was an odd vibe throughout this show, too many of the jokes just did not land or were even meant to be funny in the first place. In particular he went off on a five minute rant merely due to the audience not getting his NRL joke, mate you are in an AFL city, what did you expect to happen?

Last year there was an opportunity to get a laugh at Sydney in one of his jokes, this year it wasn’t available.

Paying out on people took up way too much of this show for no good reason, to be fair he did have this in his previous shows but it was especially bad here. For a lot of these videos where he does this also I end up turning off after the first minute as he makes his point and the rest is just piling on.

I didn’t really learn anything new about Julius Caesar in this show since the Roman empire is well studied at this point. Was Dan Carlin’s Hardcore History series Death Throes of the Republic that shows you how brutal the Roman empire really was. It makes Game of Thrones look like a kids’ show, Roman legionnaires used to build emergency fortifications out of the bodies of their enemies.

Genghis Khan was a brutal conqueror in comparison but also fair, if you weren’t taller than a certain height you wouldn’t get killed. Also one time his forces turned up at a city to find the inhabitants fighting each other to decide if they were going to surrender or not. This pissed him off so much he killed everyone in the city on principle.

I didn’t see any actual walk outs but it was a sold out show so you couldn’t really get out if you were seated at a table. Was such a weird vibe in the room with more of a “me vs. everyone else” message that Friendlyjordies is pushing these days not landing as much as it used to.

While it would be easy to say that everything else that has happened in the past couple of years has affected this show, you can cover that and actually have a good show. A Rational Fear managed to cover the major news that they had been involved in one segment of their show and not the rambling mess that happened here.

This might have originally been a good idea but it has been crushed under the weight of Friendlyjordies massive ego, which does not even matter as this review is pointless as the shows’ April 2022 run in Melbourne is already sold out plus extra.