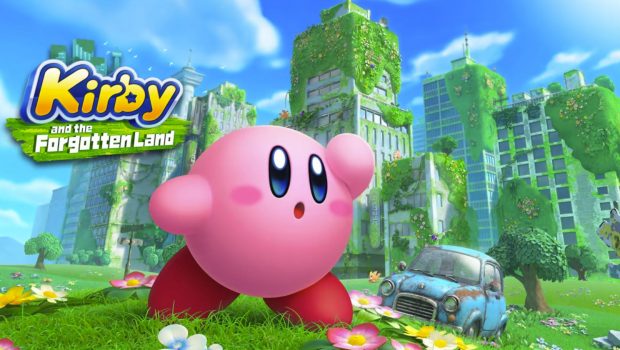 Kirby and the Forgotten Land for Nintendo Switch launches on 25th March, but for anyone who wants to get a taste of Kirby’s various copy abilities and the new Mouthful Mode, a free demo is available right now in Nintendo eShop.

In Kirby and the Forgotten Land, players will join Kirby on a journey through a mysterious, vibrant world filled with Waddle Dees to be rescued and platforming challenges galore. The new demo, which is out today in Nintendo eShop, includes three levels from the first world in the game. It allows players to try out some of Kirby’s abilities and catch a glimpse of this strange land where abandoned structures from a past civilisation and untamed nature meet. It’s even possible to go up against the first boss in the game, the fearsome beast Gorimondo. By completing the demo, players can get a Present Code that they can enter in the full version of the game, once purchased, to redeem some useful in-game items.

The demo will also provide a glimpse into Kirby’s new Mouthful Mode. With this latest addition to his repertoire, Kirby is able to inhale real-world objects to assume powerful transformations that help the pink puffball tackle obstacles or solve puzzles. In the full game, Kirby can inhale a car to zoom around and smash objects, a vending machine to fire off juice cans, a lightbulb to illuminate his surroundings and even a cone to pierce water pipes, just to name a few.

While devoid of civilisation, the forgotten world that Kirby visits is filled with challenges, ferocious foes and sweeping adventure. A second player can even join in as Bandana Waddle Dee for two-player co-op play on the same console, enabling anyone to invite a friend or family member along for the expedition.

Kick back between stages in Waddle Dee Town, which serves as the central hub of the adventure. The town will develop based on the number of rescued Waddle Dees, with different shops and games opening up along the way. As the town grows, Kirby can help out in the Waddle Dee Café, evolve his copy abilities at Waddle Dee’s Weapons Shop or enjoy some recreational fishing.

A free demo for Kirby and the Forgotten Land is now available in Nintendo eShop ahead of the game’s launch on 25th March. It includes three levels from the first world in the game. Players are now able to check out Mouthful Mode, take on the first boss, and will even receive a Present Code to use in the full game.