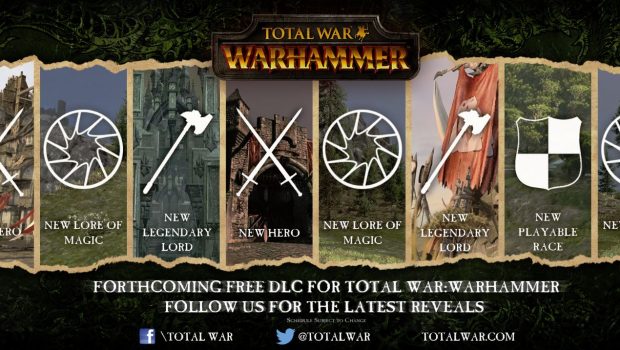 As with other recent Total War titles, Creative Assembly is pleased to say that Total War: WARHAMMER will also feature a programme of post-release Free DLC for everyone who owns the game.

In the months following launch, players will be able to grab additional new units, Heroes, Legendary Lords and even an entire new playable Race, all for free.

“With both Rome II and Attila we were able to release playable factions, new formats and even a free campaign expansion as a thanks to players for supporting Total War,” said Rob Bartholomew, Brand Director at CA. “The Warhammer Fantasy Battles World is gigantic, and we’re looking forward to exploring it over the forthcoming trilogy. But that incredible cast of characters and monsters also provides us the chance to make lots of interesting Free DLC to support our games over time.”

A new developer blog on Total War’s website talks in more detail about the future content plans for Total War: WARHAMMER, including what players can expect from forthcoming paid-DLC Campaign, Race and Lords packs before the second game in the trilogy arrives: http://wiki.totalwar.com/w/Total_War:_WARHAMMER_Future_Content_Blog

Total War: WARHAMMER is the first Fantasy Total War, and is available from the 24th May – check TotalWar.com for details.