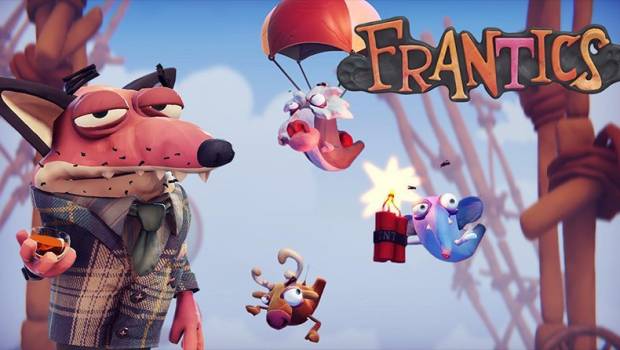 Summary: Although it’s not exactly the title that’s going to make this whole PlayLink experiment the next big thing, there are enough positive qualities here for me to recommend the game to anyone who is a fan of the genre.

Frantics is the latest entry in Sony’s PlayLink series of games, incorporating mobile phones into the gameplay in a manner similar to titles like The Jackbox Party Pack. The games released with PlayLink functionality have been a bit of a mixed bag so far, if we’re being honest, with decent ideas muddied by poor execution or games that offer engaging experiences but have little replayability factor.

Frantics sidesteps some of these issues by letting up to four players actually use their phones as controllers, sliding and using the accelerometer so that your device can control your onscreen avatar with tilt controls, which ensures constant engagement with the title. 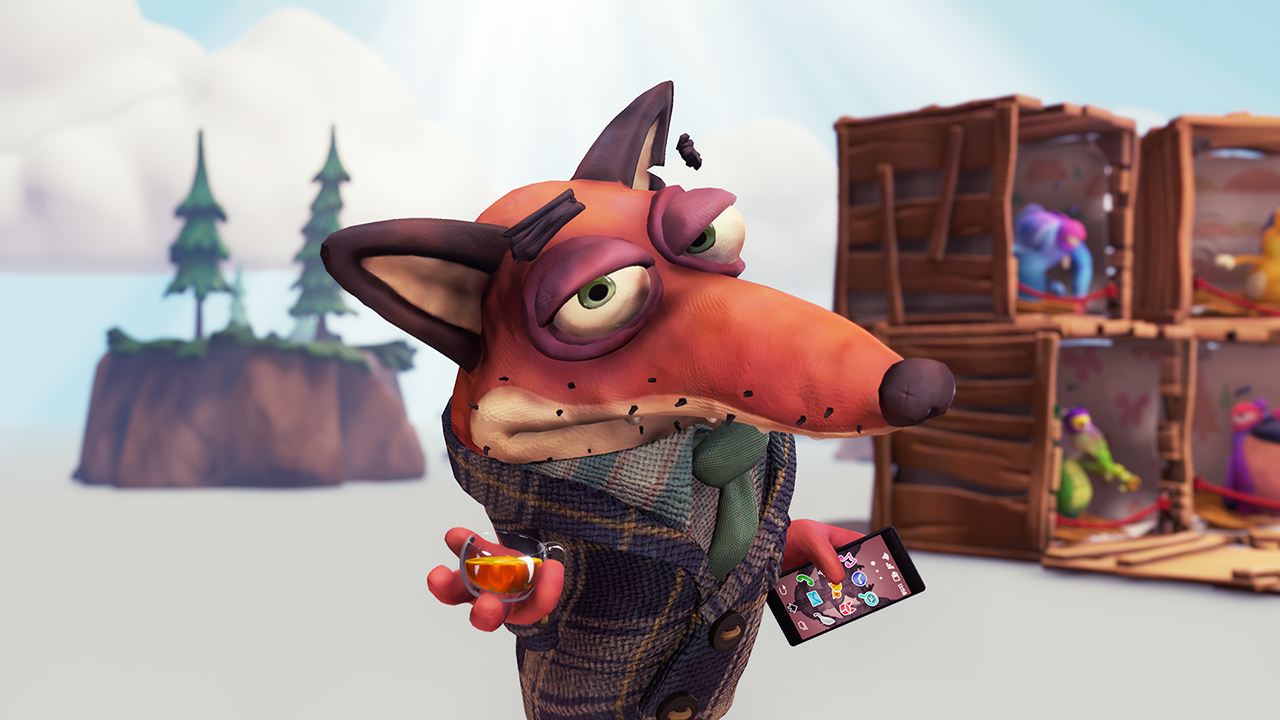 As the game is structured pretty much like Mario Party and other similar titles, the variety of fast paced mini-games ostensibly means that each round will have different tasks to tackle and should mitigate the replayability issues found with narrative heavy games such as Hidden Agenda.

Unfortunately Frantics doesn’t quite achieve its goal here, with a relatively slim selection of fast paced challenges meaning that you’ll inevitably just be playing through the same fourteen or so mini-games every few sessions, with repeat challenges cropping up by my third playthrough. 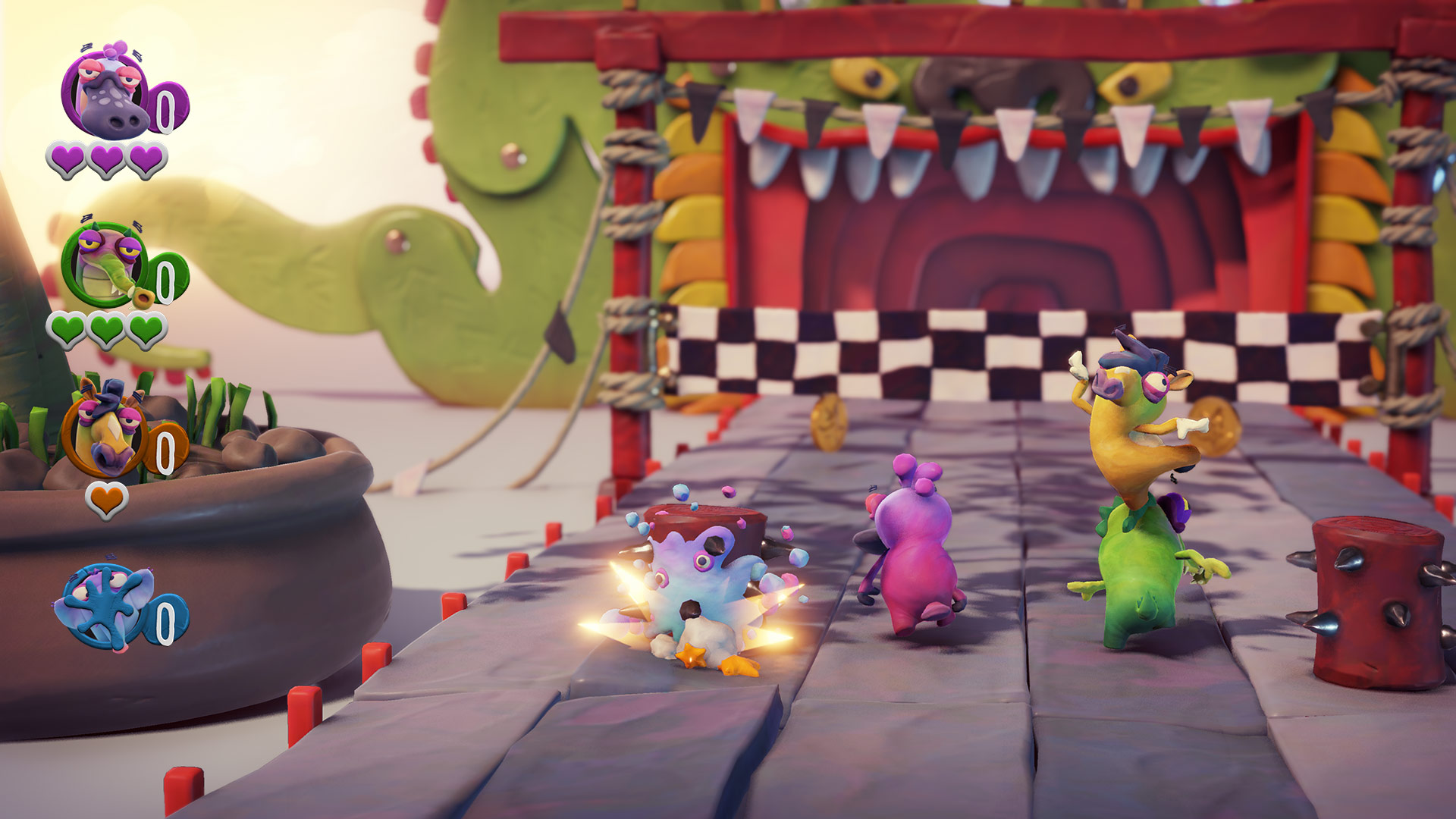 This wouldn’t be as much of an issue if the quality of the games made up for the limited content on offer here but most of them are fairly simplistic and don’t offer much incentive to replay them. I must admit that The Fox, the bombastic host of the game, does change things up a tad by secretly calling players and giving them clandestine tasks to complete while everyone else is competing normally, but this happened far too infrequently for my taste.

Players are given the option to play each mini-game at their own leisure, create a tailored playlist or participate in The Fox’s party mode, which allows for the skulduggery mentioned above and, honestly, seemed to be the “true” way to play the game. 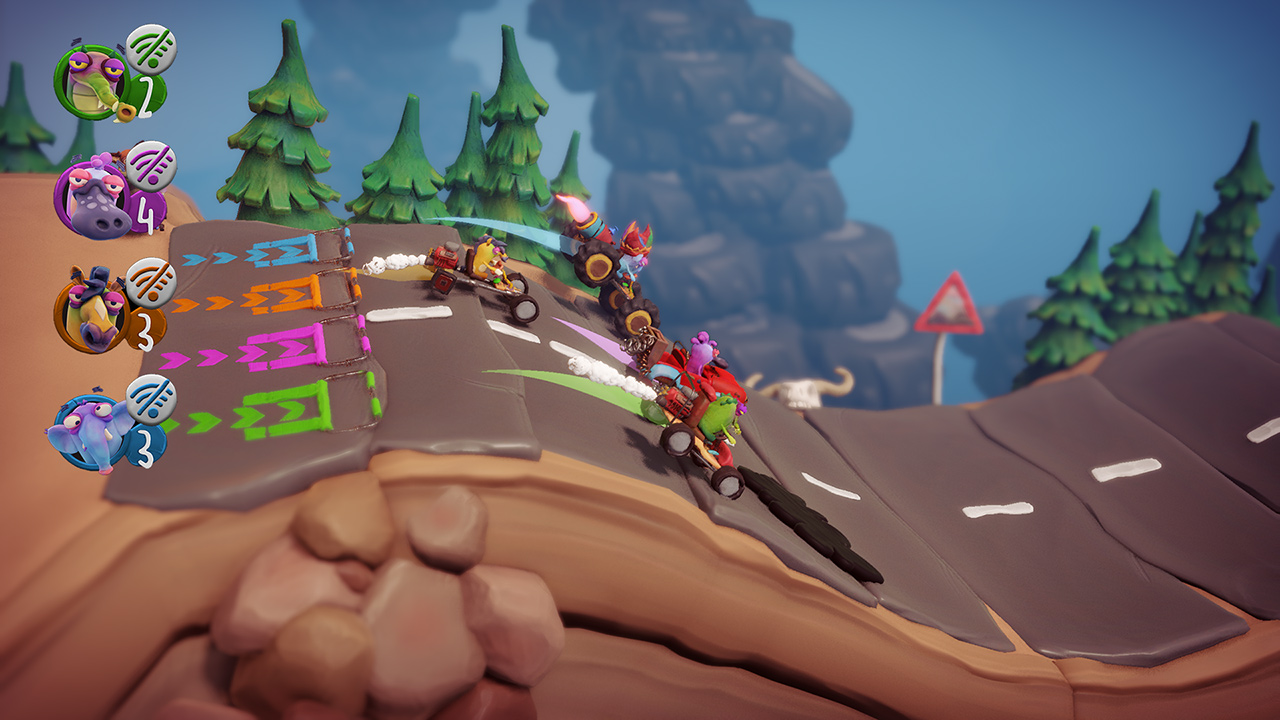 Players can collect coins throughout the games that grant access to power-ups and winning a match awards Crowns, which effectively serve as lives; after the sequence of mini-games have been completed, players will then have to battle in a final King of the Hill match, so collecting as many Crown’s as possible to ensure that you’ll have the best chance to survive the showdown is always first and foremost at the front of your mind.

Another thing that can tip the odds in your favour is assigning parts to your vehicles when doing races, giving yourself an advantage or, conversely, having to contend with someone assigning you a dud; players choose the distribution of these items, meaning that you’ll have to find a nice balance so as not to come off as too aggressive and have your friends form an alliance and take you to the cleaners. 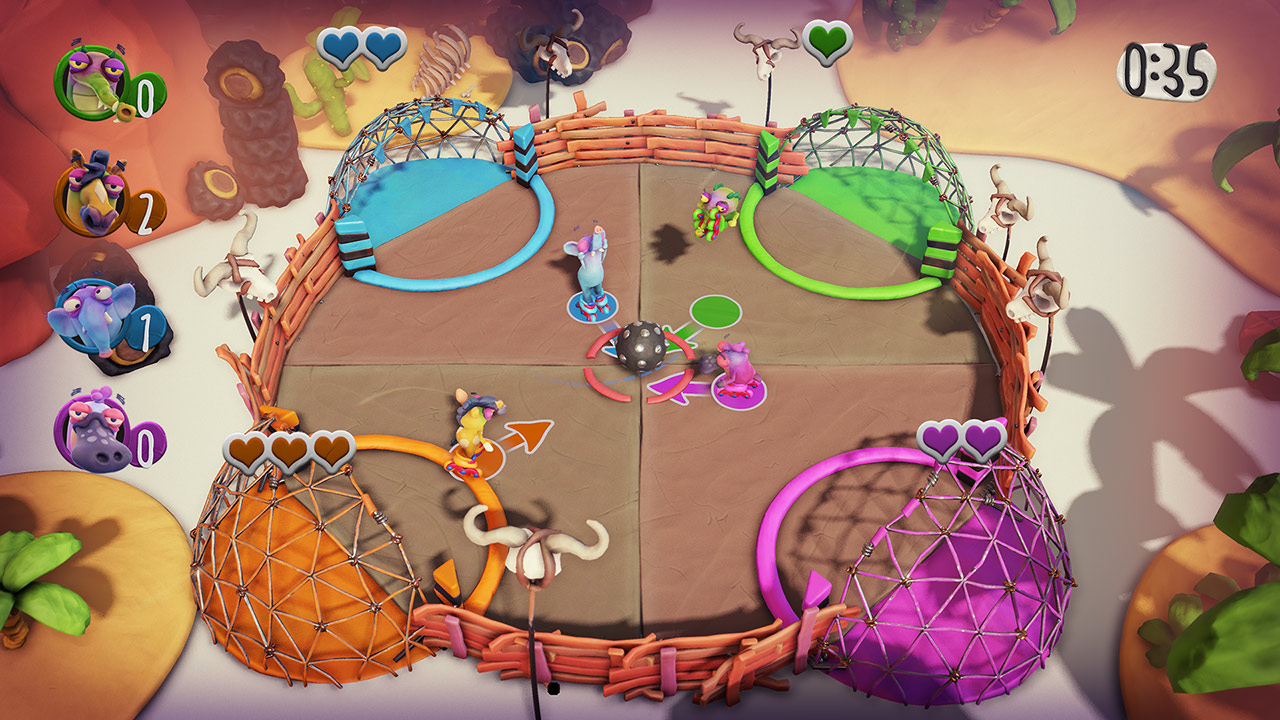 The objectives for each mini-game vary wildly, with some tasking you with blowing up your opponents, others having you race each other around a course with jetpacks strapped to your back,  dash about on rocket powered chairs, participate in downhill biking challenges, play soccer, parachute and much more.

As mentioned earlier, the controls are simplistic to allow for use of mobile devices as controllers, which were surprisingly responsive most of the time, but this also means that there’s no real challenge to the game in terms of control. While this means that Frantics would be ideal for younger players, I found that the lack of engagement pulled me out of the game to a degree, though your mileage may vary in this respect. 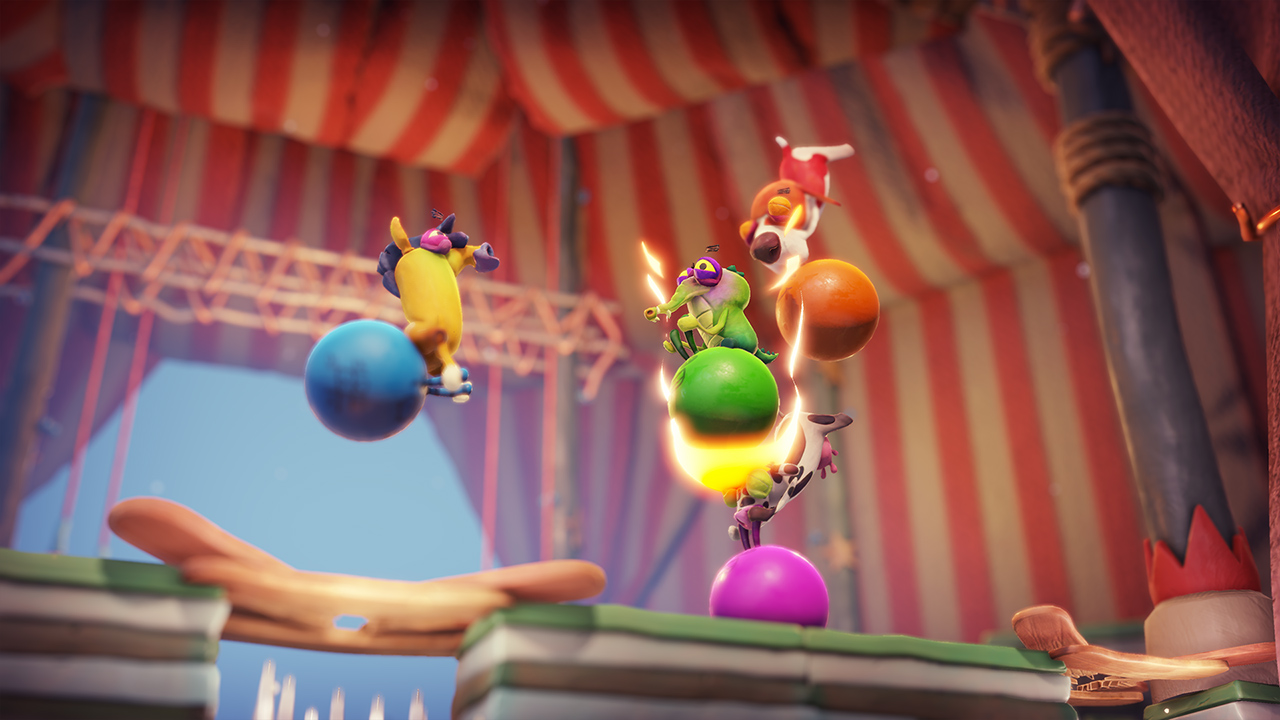 I personally really liked Frantics’ claymation-esque artistic direction and character designs and the boppy music was actually quite catchy and memorable, which surprised me immensely as I very rarely remember the soundtracks of video games.

You can tell that the developers were going for a cheery vibe with the music and, while it doesn’t come anywhere near some of the iconic tunes from series’ such as the Mario titles, it can more than hold its own against the lower echelons of its contemporaries… Which is, erm, Crash Bash, I guess? 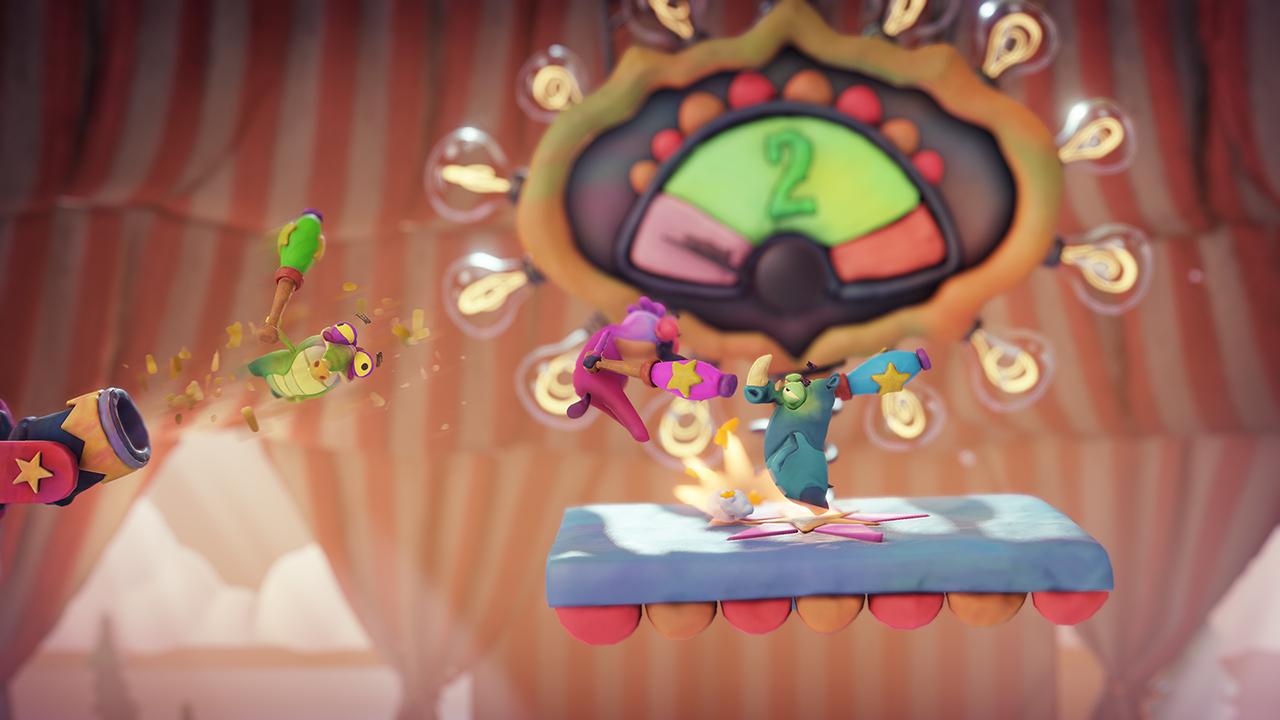 It was probably evident throughout the review but I’m not particularly a fan of party games; maybe this is because they’re often intrinsically local multiplayer dependent and getting a group of friends together in the same place for a night of gaming goodness has become more and more difficult as the responsibilities and tufts of ear hair start to accumulate alongside the years.

With that said, I’m certainly aware that it’s a popular genre for a reason and I’m probably more the exception than the rule.

The easy controls and cartoony aesthetic makes Frantics accessible for seasoned and casual gamers alike and the mini-games, while not all quite hitting the mark, are fun for at least the first few playthroughs. 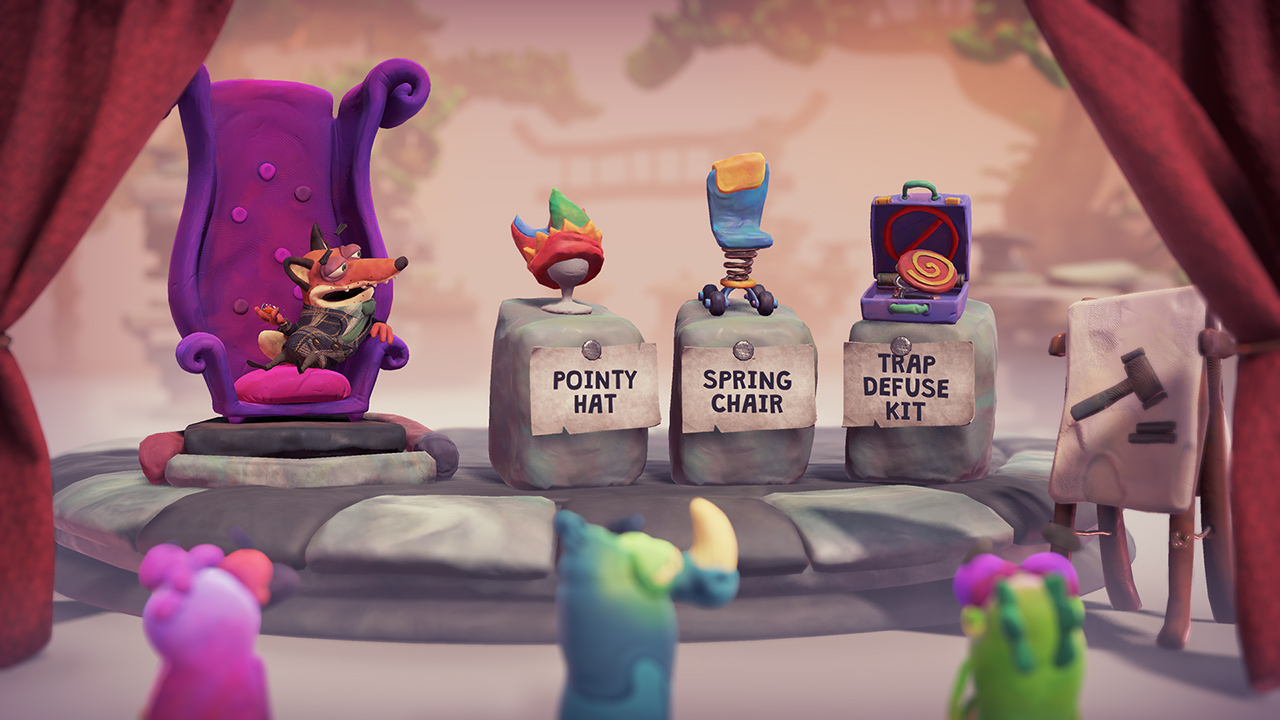 Whether or not the game will have the longevity of its contemporaries is up for debate, as younger audiences could feasibly play hours upon hours of the game whilst adults might find the novelty wearing off all too quickly, especially as the AI of your CPU opponents seems to be skewed towards children.

Although it’s not exactly the title that’s going to make this whole PlayLink experiment the next big thing, there are enough positive qualities here for me to recommend the game to anyone who is a fan of the genre; with a marvellous visual style, charismatic and occasionally shifty host and accurate controls mitigating the lack of extra mini-games and any real challenge, Frantics is definitely an acquired taste but those with the palate (and the circle of friends) for it will more than likely find a few hours of fun to be had here and the budget price only serves to sweeten the deal. 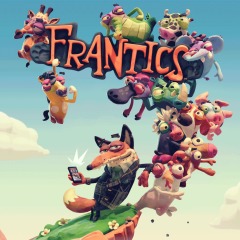