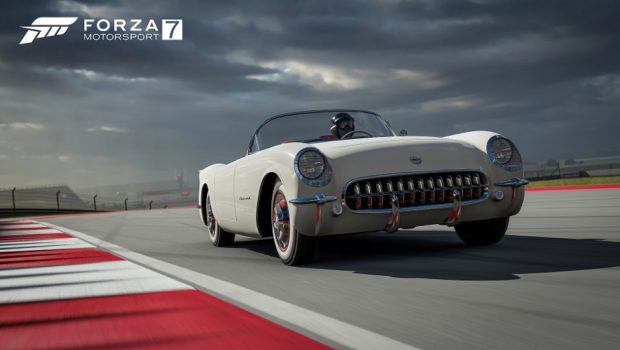 Welcome to the second week of car reveals for the Forza Motorsport 7 Garage – also known as Vintage Week! Today, we’re showing off the depth of classic cars that are a part of Forza Motorsport 7’s mammoth 700+ car list, including pre-war racers that will challenge drivers of every skill level, post-war cruisers cars that changed the way the public thought of the automobile, and many more. The range of materials and technology on display here is as varied as the cars’ shapes, sizes and capabilities. From wooden frame cars to pre-war biasply tires, the ForzaTech engine recreates all the intricacies and nuances that make these legendary cars so special.

For example, the 1950 Alfa Romeo 158, or “Alfetta” was driven by some of the greatest drivers in motorsport history. Or consider the 1967 Volkswagen Karmann Ghia, an early VW sports car designed in Italy (yes, you read that right, Volkswagen is returning to Forza). Then there is the American game changer, the 1953 Chevrolet Corvette, an automotive revelation that defined and influenced car design for generations.

Here’s a closer look at the vintage cars from week two of the Forza Motorsport 7 Garage:

Alfa Romeo has been building race cars since 1913. In fact, they started racing just after the company was founded. It wasn’t long after they found victory, and they went on to compete in nearly every form of motorsport with great success. The 158, or the Alfetta for “Little Alfa” as it is commonly known, has earned its way to reverence as one of the most successful race cars ever built, winning an astounding 87 percent of the grand prix races it and its subsequent model – the 159 – competed in. The 1,479 cc supercharged straight 8-cylinder engine in this model produced around 350 hp aboard its lithe tube-frame chassis. The great Juan-Manual Fangio along with Giuseppe Farina took the 158 to win every race but the Indy 500 during its post-war debut season. Fangio would of course go on to win the World Driver’s Championship five times making the 158 a storied piece of motorsport legend.

“The Volkswagen Karmann Ghia is the most economical sports car you can buy… it’s just not the most powerful,”  says the announcer in the commercial introducing the Volkswagen Karmann Ghia. Although it’s true enough that it was never a powerful sports car, in the looks department the Karmann Ghia has character and style in spades. Automotive historian Jan Norbye called out its stylistic similarities to the Alfa Romeo 2500 S and the Lancia Aurelia. Those styling cues are no doubt Italian, as the Karmann Ghia was designed by Ghia, a prestigious Italian design firm. Karmann coachworks was under orders to design a sports car to build over the VW chassis. After several of their proposals were rejected, Karmann reached out to Ghia, who delivered a prototype that perfectly hit the mark. The car has seen more than 20 years of production and the only cosmetic changes were larger bumpers and head and taillights.

Most legends come from humble beginnings, and the story of the Corvette is no different. In an era where the only true sports cars were built in Europe, Chevy saw an opportunity. The company went about building a dream team to design a car that would appeal to a younger market, give the brand some flash and keep it ahead of Ford in sales. Harley Earl, GM’s then design chief, let fly with an idea he had been coveting for more than a year after watching European sports cars at Watkins Glen: a low to the ground, two-seat roadster. Driven by practicality, the 1953 Corvette uses mostly off-the-shelf components such as the “Blue Flame” 160hp, 235-cubic inch in-line six-cylinder engine and two-speed Powerglide transmission. The only options available were a heater (which cost $91) and an AM radio ($145). All 300 that sold in 1953 had both options. The 1953 Corvette didn’t even have roll-up windows. All the cars were hand-built, and all were Polo White with red interiors. The use of fiberglass was not only a weight-saving innovation but was a necessity due to the Korean War and a limited availability of steel. The 1953 Corvette’s dramatic and bold exterior was just what the public wanted and it forever changed the course of American car history.