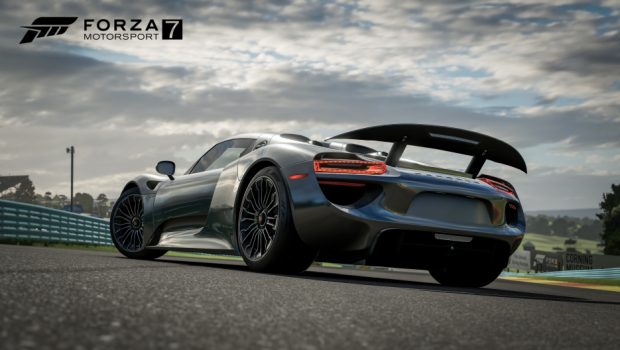 Welcome to the Forza Garage, our weekly series of car reveals for Forza Motorsport 7. With more than 700 vehicles in the game at launch, Forza Motorsport 7 features the most diverse line-up of cars in series history. Each week in the Forza Garage we’ll put the spotlight on some of the most notable cars in the list and offer some background on what makes these cars so special. Whether you’re looking to learn something new or you’re making plans of which cars to hit first when the game is released beginning on Sept. 29 (via early access for Ultimate Edition), we hope you enjoy our weekly look at Forza’s biggest and best car list yet.

We’re kicking off the Forza Garage with a bang, showcasing more than 160 cars this week alone, including the largest collection of Porsches, Lamborghinis, and Ferraris ever seen in a racing game. Call these legendary manufacturers “The Big Three” if you like, but they all represent the cutting edge of visual design, innovative engineering, and perhaps best of all, raw unadulterated performance. Welcome to Week 1 of the Forza Garage. Let’s get started!

The 918 Spyder is the culmination of years of research and technical prowess from the first company that ever sported a prancing horse on its badge. Built almost entirely of carbon fiber, the 918’s nearly 900 combined horsepower is generated from its 4.6-liter naturally-aspirated flat crank V8 and hybrid electrical system. The 918 Spyder already set a production car lap record at Mazda Raceway Laguna Seca and shattered the production car record at the Nürburgring by 14 seconds. The blank sheet of paper 918 designers started with produced innovations in every direction and convention was left by the wayside. The result is nothing less than the spark of a new generation of the highest performing vehicles the world has ever seen.

Faceted like a cut diamond, there’s no mistaking the Sesto Elemento for anything else on the road — even other Lamborghinis. Sesto elemento is Italian for “sixth element;” if you don’t have a periodic table nearby, that’s carbon, a not-so-subtle hint that the body is composed entirely of the woven stuff. Regardless of what it’s made out of, the Sesto Elemento is primal and aggressive, studded with blinding red accents and show-stopping open rear bodywork, from which the taillights and transaxle dangle precariously. Under the six red hexagons serving as outlets for engine heat resides the same 5.2-liter V10 found normally in the Gallardo but, considering the Sesto Elemento is more than half a ton lighter than the Gallardo, performance is in another dimension entirely. Lamborghini claims the carbon-covered monster will teleport to 60 mph in less than 2.5 seconds, and that seems reasonable, if you can consider such wild acceleration reasonable at all. For truly elemental performance, look no further than this ultimate Lamborghini.

The epic battle between Ford and Ferrari reached a flashpoint in 1966, when Ford GT40s swept the podium at Le Mans. Clearly, the 330 P3 needed a revision to compete the following season, and engineers swarmed over the car. The resulting P4 looked identical from a few steps back — onlookers were surely confused when the first P4 first saw light of day, wearing nearly the same beautifully sinister lines. However, a closer look reveals significant changes that perhaps only became obvious when P4s swept the podium at Daytona as payback for the Le Mans humiliation the year before (and providing the new Ferrari 365 GTB/4 its famous nickname in the process). Of the changes, the most important from a competition perspective was an extensive reengineering of the 330’s powerplant, the largest Lampredi V12 in Ferrari’s arsenal. Fitted with a new three-valve head and fuel injection, it is good for 450 horsepower. The slightly shorter P4 only weighed a ton, so performance was (and still is) staggering — more than enough for Ferrari to capture the Prototype Championship, and also more than enough for the FIA to jump in and limit next year’s prototypes to only three litres, effectively ending the careers of both the P4 and the GT40.

For the full list of cars we are announcing during the first week of the Forza Garage, check out the Xbox Wire.