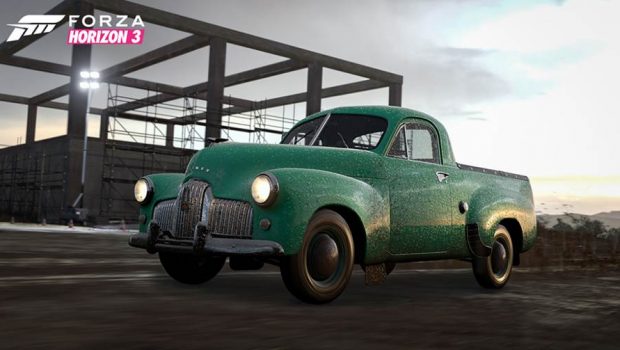 In this week’s edition of the Forza Horizon 3 Garage, our ongoing series of car reveals before the game is released on Sept. 27, we’re staying true to the Australian setting of the game and leading with three cars from the country’s famed Holden marque. This trio of Holden models are part of the legacy of distinctive Australian car culture, and promise big fun to Forza Horizon 3 players who want a true connection with the game’s Down Under setting.

Digging into the past, we’ve got the legendary ’74 Sandman panel van and an early 1950s Ute car that helped establish Holden’s line of unique utilitarian vehicles. Of note, Holden will be shutting down operations in Australia in 2017, so it’s fitting that we also include the 2016 Holden Special Vehicles GTS Maloo, a car that pays homage to Holden’s Ute history, while still being built to perform very much in the present.

Elsewhere in this week’s line-up of announced cars in Forza Horizon 3, we have a famed example of early supercar style in the 1992 Bugatti EB110 Super Sport, and an Italian concept SUV that will feel right at home cranking through the dusty backroads of the Outback in the 2014 Lamborghini Urus, along with some fine examples of American muscle like the 1970 Chevrolet Corvette ZR-1 and Australian muscle in the 1973 XB Falcon GT.

Forza Horizon 3 will feature more than 350 cars – from the finest examples of precision engineering to some of the toughest and hardest-working trucks and buggies in the world. Let’s dive into week two of the Forza Horizon 3 Garage, and see what awaits!

The roots of the Holden Ute go back to the to a post-World War II era, when the world couldn’t get enough Australian wheat and wool. When “Australia’s Own Car” – the 48-125 Holden four-door sedan –launched, it only had one model and Aussies had to wait more than two years for a load-hauling version. Once the Ute arrived, it was dubbed the “FX” – though exactly why it earned that moniker is the subject of debate. What was clear is that these durable and hearty vehicles were perfect for the work that needed to be done, whether it was on the farms or construction sites of Australia. With just 60 hp in its stock form, the FX is a far cry from the powerhouse utes of today. But the heart and soul is all there.

Few vehicles are as distinctly Aussie as the Sandman HQ panel van. Originally, these sedan deliveries were derivatives of the typical ute with a metal or plastic shell enclosing the cargo tray. They developed into a phenomenon that escalated to its height in the 1970s before falling off in popularity. The most famous Sandman was driven by Mel Gibson in the original 1979 “Mad Max” film. Like many, Max’s panel van was converted for camping. During the climax of their popularity, Sandman panel vans were tricked out with mural paint jobs, custom windows and details that spoke to each owner’s passions. Sure, some were used for more utilitarian uses but in some cases, what went on in the backs of many of the funky Sandman HQs around the country was often more exciting than merely hauling around the tools of the trades that helped build urban Australia.

As you bang through the gears and are rocked back in your seat at the release of the clutch, you’ll quickly understand why the GTS Maloo is referred to as the “Ferrari of utes.” It’s one way for Holden to say thank you in big way before the Australian manufacturer closes its doors in 2017. While utilitarian in purpose, this ute is all about going very fast. Take the supercharged V8 under the hood or the upgraded brakes and suspension. This Maloo is ready for track duty straight away, mate!

In addition to the highlighted cars above, here’s the full list of cars (and images) we are announcing during the second week of the Forza Garage series for Forza Horizon 3. Stay tuned to Xbox Wire and ForzaMotorsport.net for more garage additions in the coming weeks.