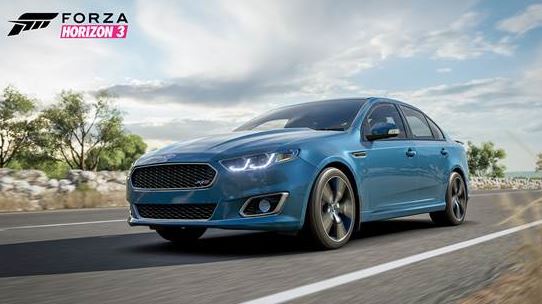 Welcome to the first edition of the Forza Garage for Forza Horizon 3! Over the next several weeks, we’ll be rolling out all of the cars, trucks, buggies and other special vehicles that will be appearing in the game. Forza Horizon 3 features more than 350 vehicles – that’s 150 more than Forza Horizon 2. Not only is this the largest number of cars ever featured in a Forza Horizon game, it’s also our most diverse line-up yet!

Today’s announcement features state-of-the-art supercars like the Lamborghini Centenario and the Ferrari La Ferrari, Forza community favourites like the 2002 Nissan Skyline GT-R V-Spec II and the 2013 Subaru BRZ, and off-roading specialists like the 2016 Ariel Nomad and the 2015 Baldwin Motorsports #97 Monster Energy Trophy Truck. Those last two off-roaders are making their debuts in Forza Horizon 3, alongside highly anticipated models like the 2015 Ford Falcon XR8 and the 2015 Polaris RZR XP 1000 EPS, and more.

In other words, we’ve got a lot of great cars, trucks, and buggies to get through today, so let’s get started!

When Ariel founder Simon Saunders brought the world the skeletal, Ariel Atom most asked, “What is it?” Upon discovering the Nomad’s track-destroying abilities and epic fun driving characteristics, now most just asked, “Can I have a ride?” The same goes for the Atom’s off-road cousin, the Ariel Nomad. Its steel tube chassis provides protection from everything but the elements. While its suspension is not quite that of a Baja-buggy, it’s plenty adept for everything off-road while still able to hang it out on a curvy road or track. Pushing the rear-end out of shape at the whim of your right foot is a Honda 2.4-liter engine delivering more than enough power for a good time. With the Nomad, you can make friends no matter where you go, and go anywhere they go.

The XR8 represents the top of the Ford Falcon line. Under the hood is the grunty power of the Boss supercharged 5.0-liter V8. No matter where you are in the power band, the XR8 is ready to pull away with a gesture from your right foot. Outside, the smooth lines of this four-door sedan are reminiscent of the V8 Supercars that are built from its mould. Sure, this is a production vehicle meant for the city streets and country highways, but you will find performance ready to thrill you at every corner.

B.J. Baldwin is one of the winningest off-road drivers in the history of this gruelling sport. He was the first to solo the monumentally challenging Baja 1000, and won the race to boot. Baldwin’s skill behind the wheel is backed up by his physical ability to take all the desert can dish out. The #97 Monster Energy Trophy Truck is the perfect complement to its legendary pilot; sucking up bumps and whoop-dee-doos, or landing the biggest jumps you can find in Forza Horizon 3’s Australian outback. There’s more horsepower here than any average driver will ever need and more suspension travel than nearly any vehicle on the planet. With the right driver behind the wheel, this truck can lay waste to anything else in the Outback. Think you can fill B.J. Baldwin’s race seat? Strap in and let’s find out.

When it comes to Utes the FPV Pursuit is the cream of the crop. With only 120 models produced, these are collectors’ items the moment they leave the showroom floor. Unless you’re from Australia the concept of a Ute may seem strange, but all that will fade as soon as you sit in the driver’s seat and fire up that supercharged V8 with its high-flow dual exhaust. Sure, you can still haul the hay for the horses, but getting from the farm to town and back has never been so fun.

The first side-by-side buggy playable in a Forza Horizon game is here and it is nothing less than a beast. The RZR XP 1000 EPS (Electronic Power Steering) is just about the most fun you can in a side-by-side. You will find upwards of 100 hp, a long-travel suspension and a full safety cage in what amounts to a mini-buggy. A single-speed gearbox means you just punch it and hang on. Let the off-road tires find traction and let the shocks suck up the bumps; you just hang on and watch the water spray and dust fly. When it comes to navigating tight trails and narrow gaps, the RZR will give you an advantage over other vehicles and when it comes to outright thrills, it is hard to beat, period.

Ferruccio Lamborghini was a Taurus, hence the influence of the symbol of the raging bull on the many cars of his prestigious brand he began in 1963 to compete with rival Ferrari. Lamborghini was born in 1916, and the new Centenario was built to celebrate his 100th birthday. Built on the Aventador Super Veloce chassis, complete with a powertrain giving it an advantage in lightness and a formidable 740 hp. With further tuning, the Centenario gleans nearly 20 more ponies from the V12 and loses 11 pounds, while gaining significant downforce and cooling from its body design. Every exterior detail was designed with function in mind to manage drag and improve downforce. Making history of its own, the Centenario is the first Lamborghini to employ rear-wheel steering. With only 20 models in the works and a price tag of $1.9 million each, Forza Horizon 3 will likely be the only place most of us will get a chance to experience it.

In addition to the highlighted cars above, here’s the full list of cars (and images) we are announcing during the first week of the Forza Garage series for Forza Horizon 3. Stay tuned to Xbox Wire and ForzaMotorsport.net for more garage additions in the coming weeks, including more Aussie cars to be revealed soon.