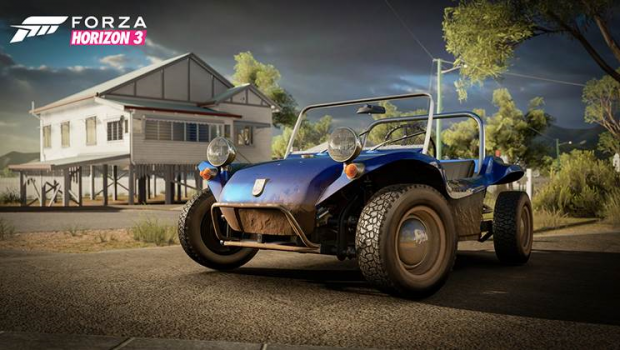 In the Outback, you need a rig that’s tough, reliable and not afraid to get dirty. That’s why, for this week’s edition of the Forza Garage for Forza Horizon 3, we chose three very specific vehicles to spotlight. The rigs in this trio of rugged automotive awesomeness were born for getting off the beaten path. From buggies with enough suspension to suck up anything that comes at them, to the SUV that “conquered Australia,” these vehicles are ready for anything.

At the top of the list, we have the original Meyer’s Manx dune buggy, a vehicle that broke new ground for adventurous drivers. For those looking for race-bred technology at its best, the Penhall Cholla has chalked up wins just about everywhere in Class 10. And when it comes to overall brawn, the Toyota FJ40 is a worldwide favourite.

Throughout the remainder of this week’s car announces, you will find more vintage Australian muscle in the Ford Falcon XY GTHO Phase III and some tough trucks to blaze a trail with, like the Ford Raptor Race Truck, the Jeep Cherokee SRT and the Ram Runner.

Here’s a closer look at this week’s spotlight cars:

Bruce Meyers created the Meyers Manx when he was living in a shed and building boats out of a then relatively new material called fiberglass. The shape of the Manx created an allure that spoke to those in search of freedom and fun. It was copied by many companies seeking to profit from Meyers’ design, but none have matched the style and form of the original. The lightweight chassis fitted with a Volkswagen engine and suspension found its way into many record books in the desert, hill climb racing and even drag racing. Whether you are putting the Manx through its paces or just cruising around enjoying the open-air ride, there’s nothing else like this original dune buggy.

In the desert, the Cholla is the meanest cactus around with its needle-like spines partially enclosed in a papery sheath. In the buggy world, Penhall’s Cholla is one mean mother as well and ready to destroy the competition when it comes to sucking up bumps and flying across rough terrain. When the Cholla debuted at the Baja 1000 in 2011, it won Class 10 by four hours – that’s a margin that doesn’t even leave its dust to be eaten. With more than 20 inches of wheel travel in the front and back, punishing environments will feel silky smooth and the hugest jumps will be absorbed with a smooth landing. Buggies are a staple for the Outback and the Cholla is without a doubt one of the best in the business.

Among iconic SUVs, the FJ40 deserves its place near the top. Designated F for the engine and J40 for the short wheelbase chassis (there are mid and long wheelbase models as well), this competitor to the Jeep CJ and Land Rover has a long and loyal global following. The coming of the FJ40 can also be thanked for building worldwide confidence in the reliability and durability of Toyota vehicles since 1960, when the model was first introduced. The FJ40 is a rugged off-road vehicle that is happiest when it is covered in muck, fording a river or climbing a mountain. Hop in and let your Australian adventure begin.

In addition to the highlighted cars above, here is the full list of cars (and images) announced during the fourth week of the Forza Garage series for Forza Horizon 3. Stay tuned to Xbox Wire and ForzaMotorsport.net for more additions in the coming weeks.