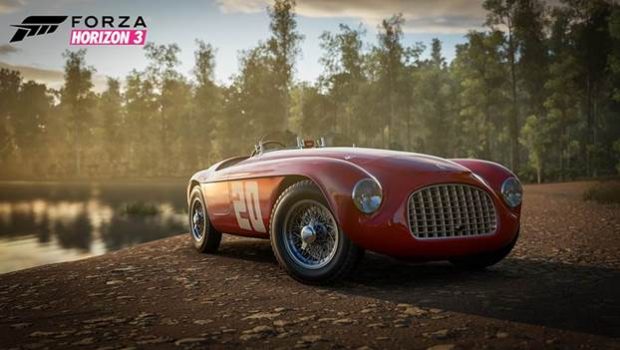 A trio of classics headlines this week’s edition of the Forza Horizon 3 Garage. While week one of our series focused on some of the new off-roading options coming to tame the Outback of Forza Horizon 3 and week two focused on beloved examples from Australia’s famed Holden marque, this week we’re celebrating the cars from times when driving was as much a pleasure as it was a means to an end.

Leading us off is the 1948 Ferrari 166MM Barchetta, which inspired a song by the band Rush, holding a special place in Ferrari history and among classic rock fans. Alongside the Ferrari comes the gorgeous 1953 Maserati A6GCS/53 and the 1969 Jaguar Mk II 3.8 – two examples of form and function coming together in perfect harmony to create cars that drive just as great as they look.

Elsewhere this week, more classics abound. There’s the diminutive 1957 BMW Isetta Export 300, which instantly became a fan favourite as part of the Forza Motorsport 6 Turn 10 Select Car Pack, as well as a late 1950s Plymouth Fury, a car whose cultural claim to fame is a starring role in the horror movie “Christine.” We’ve also got the punchy Ford RS200 Evolution and the truly epic McLaren F1 GT to round out another varied week of automotive fun.

Let’s take a closer look at this week’s spotlight cars:

Not only has Ferrari’s Barchetta been the subject of a famous rock song, the 166MM is arguably one of the most significant and potent sports cars in Ferrari history. It won the Mille Miglia (hence the MM) and the 24 Hours of Le Mans. At Le Mans, Luigi Chinetti drove 23 of the 24 hours himself, and only one hour was left for Lord Selsdon to meet regulations. Barchetta, the nickname given to the car by journalist Giovanni Canestini, translates to “small boat” and you can see the lines of the Barchetta in the cars of British automaker AC and the later Shelby Cobra. As the song goes, the roar of the V12 and its visually stunning shape will make practically any historic Ferrari fan long for that better vanished time.

The Berlinetta’s gorgeous form, courtesy of famed body maker Pininfarina, is only outdone by its racing pedigree. It was built for competition in road racing events like the Mille Miglia. Under its beautiful surface is a race-bred chassis built by Gilco, powered by a free-revving short-stroke inline six-cylinder that delivers around 170 hp. Definitively Italian, the A6GCS is alluring to view and astounding to hear. Get your own eyeful or earful to fully comprehend this amazing vehicle.

When you hear the term “saloon” used in reference to cars, the Jaguar Mk II is likely the car that comes to mind. As well it should; these spacious, luxurious and fast cars were iconic throughout the 1960s and are raced every year at the Goodwood Festival of Speed against the momentum racers less than half their size. While the initial impression is one of extravagance, the Mk II’s performance is palpable. With the 3.8-liter six-cylinder, it is capable of propelling its considerable heft to highway speeds very quickly and can reach speeds in excess of 120 mph. In its day, the Mk II was the getaway car of choice for would-be-criminals, as well as the choice of British police to patrol the motorways. In other words, no matter what you’re looking to get up to, the Mk II will make a fine addition to your garage.

In addition to the highlighted cars above, here is the full list of cars (and images) announced during the third week of the Forza Garage series for Forza Horizon 3. Stay tuned to Xbox Wire and ForzaMotorsport.net for more additions in the coming weeks.