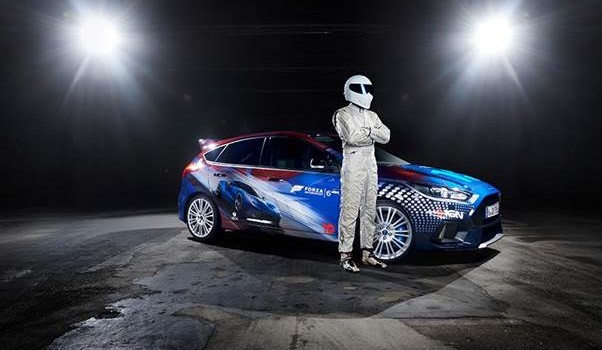 SYDNEY, Australia, Aug. 5, 2015 – A unique all-new Ford Focus RS featuring an exterior designed by players of Forza Motorsport for Xbox was unveiled today at a special Microsoft event, ahead of the international 2015 Gamescom event in Cologne.

The special Forza Focus RS was driven to the event – and accompanied during the evening – by the Stig from BBC’s Top Gear, who will feature in the new Forza Motorsport 6 game for the Microsoft Xbox One console.

Ford also has partnered with Microsoft to feature the all-new Ford GT ultra-high-performance supercar in Forza Motorsport 6, the latest title in the acclaimed racing simulation franchise for Xbox.

Forza Motorsport 6 makes its European debut at Gamescom before going on sale later this year, and visitors to the event will be able to view the all-new Ford GT – the game’s cover star. Gamescom – the largest interactive games trade fair in Europe – takes place Aug. 5-9.

The pinnacle of the Ford Performance line-up, the all-new Ford GT uses an aerodynamic carbon fibre body and fuel-efficient twin-turbocharged V6 EcoBoost engine to deliver one of the best power-to-weight ratios of any production car. The state-of-the-art Ford GT chassis features an active racing-style torsion bar and pushrod suspension, with adjustable ride height, and carbon-ceramic brake discs. The new GT will one of the most exclusive Ford vehicles ever with limited volume sold around the world.