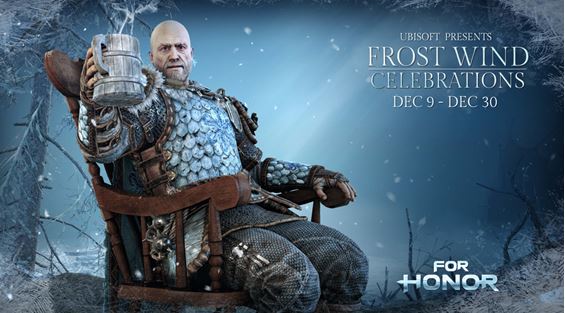 In Year 5 Season 4 Frozen Shores, For Honor’s factions recover from their losses caused by the perils of Tempest, until mysterious ships show up at the docks. In the limited time event available today, Frostwind Celebrations, players will be able to progress through a Free Event Pass and gain access to a multitude of rewards such as a new Paired-Emote, a Battle Outfit, an Ornament and an Effect. There will also be  weapons available for players to loot.  This season also launches with changes to the River Fort, Gauntlet, and Harbor maps. For $14.95, players can purchase a Battle Pass with premium content including new battle outfits, ornaments, execution, podium and effects.

Following last season’s Testing Grounds, improvements to the Shinobi will be added to the live game today. The next planned Testing Grounds starts December 30, with the focus on a second pass on the Dominion Game Mode as well as improvements to the Conqueror. Changes for Dominion will include capture speed, renown, hard points and other UI improvements. On January 27, Title Update 2 brings a new hero into the world of For Honor, as well as limited-time experiences and rewards. The Covenant Games return, allowing players to play the Carousel of Horkos game mode, with rewards including a Battle Outfit and an Ornament as well as an Effect. A Throwback Event, the Black Prior’s Riposte, will also bring back original rewards and weapons.

For the latest about For Honor and other Ubisoft games, please visit news.ubisoft.com