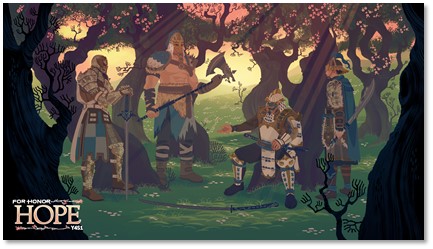 FOR HONOR KICKS OFF YEAR 4, SEASON 1 ON FEBRUARY 6

Year 4, Season 1 “Hope” starts as the cataclysm that had been afflicting the world of For Honor seems to be coming to an end. Amidst the chaos and after years of unrelenting war, the Heroes of For Honor will need a new reason to fight. Players will be able to access new lootable armors and weapons, in-game events, and more new content all themed around the new change in the For Honor world.

The new Season also introduces the Battle Pass, a new progression system which will allow players to unlock unique cosmetic rewards through the Free Pass and the Premium Pass by completing matches, Arcade quests and daily orders.

“Hope” kicks off For Honor’s Year 4, the “Year of the Reckoning”, which will bring an additional year’s worth of content to For Honor throughout four Seasons, including two new Heroes, new customization options including new armors, and more. Balancing will remain one of the priorities of the development team, as well as the support and development of the competitive scene with regular official tournaments. In homage to its ongoing lore, For Honor is partnering with renowned artists to work on the game’s official artworks for each Season that offers new perspectives on For Honor’s world.