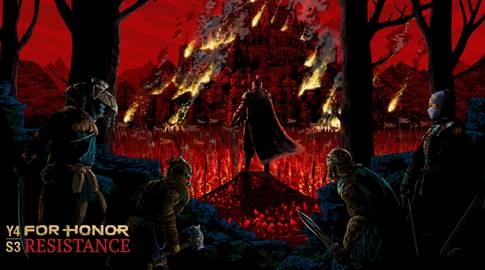 Today at Ubisoft Forward, Ubisoft® announced that For Honor® Year 4 Season 3 Resistance will launch on September 17. With over 25 million players, For Honor is available on PlayStation®4 entertainment system, the Xbox One family of devices including the Xbox One X, and Windows PC, as well as on Stadia and UPLAY+, the Ubisoft subscription service.*

In the previous season, the Warmongers imposed a regime of terror that left many scars around the world. But in the most desperate times, a spark of Rebellion is all that is needed to bring back hope. Starting September 17, players will be able to join the Rebellion in Year 4 Season 3 Resistance.

Full details for For Honor Year 4 Season 3 will be revealed on a special Warrior’s Den livestream on September 10 at 4:30pm ET on the For Honor Twitch channel, twitch.tv/forhonorgame.