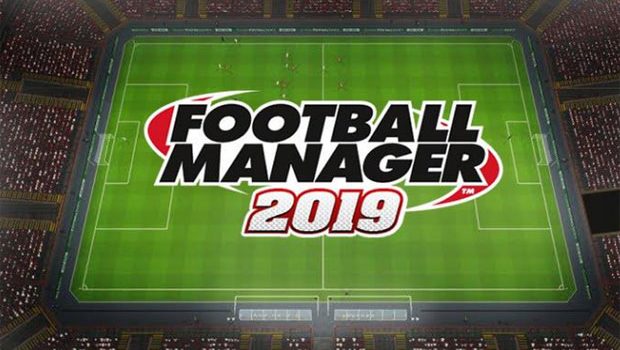 All the tragic Football Manager addicts have one. That one story that represents the pinnacle of excitement, the agony and the ecstasy of the beautiful game. The story that when told to other fans will illicit gasps and groans, but told to anybody else will just be met with blank stares and questions like “So… you just watch the games? You can’t play them?”. Mine occurred many entries ago. I found myself in the Champions League Final, winning with the last kick of the game as my substitute keeper rose up and met a corner. I audibly shouted “Get in lads”, I was jubilant. My girlfriend at the time rolled over in bed and said “How can you get so excited about these spreadsheets?” in a bemused tone. It was 4am, I had said I would join her shortly almost 5 hours ago. That is the power of Football Manager. Its ability to suck away hours of your life effortlessly, the way you alternate between anger and joy, the satisfaction of seeing a bargain pick up net a goal in the Champions League Final. I’m happy to report that Football Manager 2019 is just as addictive and brilliant as ever, so say goodbye to your social life. 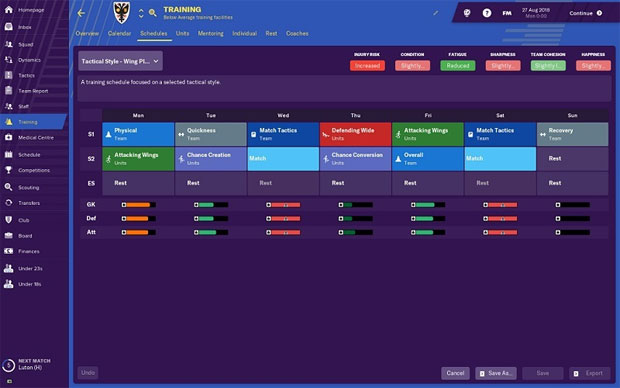 Football Manager is both incredibly easy and incredibly hard to describe. It is a football management simulator, where you take control of a club and guide them to glory. If you fail you can and will be fired, at which point the game continues and you can find a new job. On its surface it is a collection of spreadsheets held together by a fairly shoddy looking match engine that represents a hard sell to anyone new to the franchise that have been weaned on EA’s slick FIFA series. Beneath that surface is one of the most complex and detailed simulation games with a match engine that is much improved, yet still needs some work. Football Manager 2019 can be a daunting prospect for someone who has never played before. But as has been the case the last few years Sports Interactive has done a good job with customising how much you take on. If you find the minutiae of contract negotiation terribly tedious, you can leave that to your staff. In fact, you can pretty much leave everything to your staff and just watch your season go by. Obviously this is not recommended but there are definitely elements that your more casual player may not want to get too involved in. The fact that you can switch these roles at any time also means you can gradually take on more as you become accustomed to the game. In addition to this when you first start playing your staff will “brief” you on the various roles around the club. These amount to mini tutorials that show you the many facets of the game. Die-hard fans can of course dive right in to the thick of things and experience the changes from previous versions.

The major upgrade being touted is the revamped training system. Training is organised in blocks of the day, and there are many different tactical, physical and mental sets of exercises you can plug in. Say you want to spend the week combating an offensive minded team by sitting back and countering, you can specifically train your team on that desired tactic for the week. You can also choose how much you push your players in training. Decide to push them to their limits and their stats might increase faster, but you will find players who are exhausted going in to games or more likely to injure themselves. In addition to training you will need to keep an eye on your medical staff who will brief you on your players injury susceptibility and whether your workload is suited for them. It is a lot to take in and very involved, which is why it is good you can palm it off to your coaches or assistant managers if you struggle with it. Your staff will send you a training report every week and you can choose to tinker with it if you like or you can leave it with them. 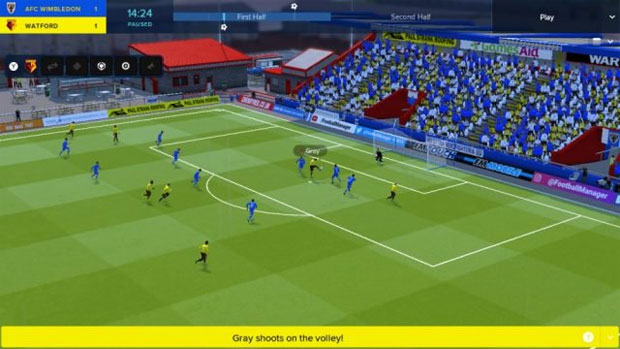 The match system has also been slightly upgraded. It does not boast the slick trappings of an EA Sports engine but there is enough in the upgraded animations to tell you more than ever before. Flicks and back-heels are much more noticeable now, so when an audacious piece of skill is pulled off on the field you can see it in real time. It definitely feels a little creaky at times, but has come leaps and bounds from the Football Managers of the pasts moving circles. Apart from this matches are much the same. You can set your tactics on the go, choosing from a number of pre-arranged formations and whether you wish to play an attacking or defensive game. You can shout at your players on the pitch and see how it affects them psychologically, although this can feel dangerously random at times.

Tactics is another area where you can be as analytical or hands off as you like. Things have been streamlined a little. Football Manager 2019 has a number of pre-set philosophies that have the player roles adapted to match. I opted for the Jurgen Klopp style Gegenpress but there are a number of philosophies you can implement, which then have a number of pre-set formations that work best with that. From there you can endlessly customise how you play. Do you want your wing backs to surge up the field? You can instruct them to overlap the flanks whenever possible. Does your preferred striker not work in the formation you are going with? Change their role or re-train them to become more familiar with the system. Do you have a dribbling dynamo? Instruct him to run at defences. Hours can be spent in the tactics screens, shifting players around and trialling various instructions before you take them out in to the game. Just like with every other aspect though, they can also be set up in minutes and mostly left to staff if you prefer. 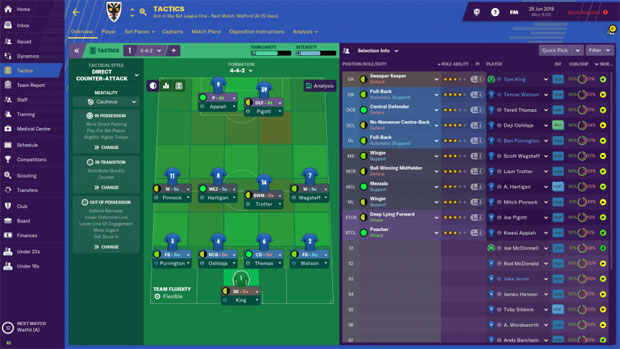 A few things could have used an update. The media interaction is largely the same as it ever was. Some of the responses are very old, and it seems oddly unintegrated in to the rest of the game. Likewise, player interactions still sometimes seem random in nature as one innocuous comment can send your players in to hysterics. I suppose this might be true when dealing with multi-millionaire divas but in this game, where every speaks with a kind of stilted and robotic dialogue it comes off as unrealistic. 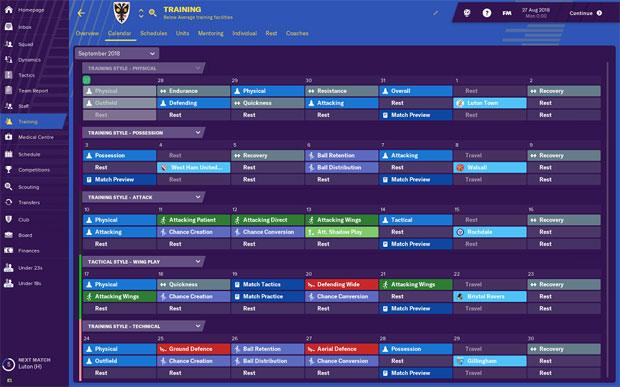 Even with the new levels of accessibility and staff assisted help, Football Manager 2019 is not for the faint of heart. It’s not going to convince non-football fans finally hop aboard. Similarly it’s probably not going to lure fans of the flashy action that FIFA provides over to its hard-core data analysis. But for football buffs and management wannabes there is simply no equal to Football Manager. Nothing else has the depth, nothing else summons the feelings, nothing else feels quite as true to life. Improvements have been made and it is still the biggest, most detailed football simulation out there. You will lose months of your life over it, cursing to yourself over trivial things such as substituting your left back too early. It is a beautiful game for the beautiful game.