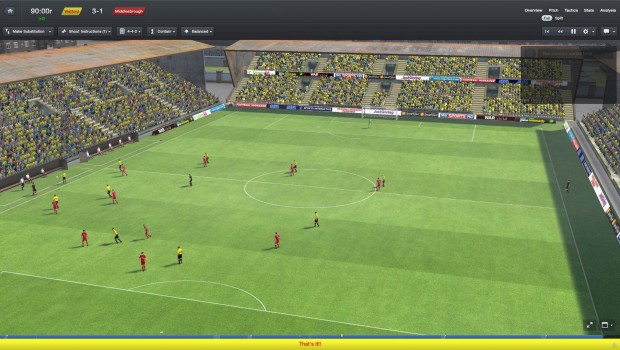 Latest incarnation of global hit simulation displays a personal touch with the expansion of manager personality, greatly enhanced player interaction and a major overhaul of the 3D Match view

SEGA® Europe Ltd and Sports Interactive™ are delighted to announce the news that Football Manager™ fans across the globe have been waiting for – Football Manager™ 2015 will hit the streets on November 7th 2014.

This latest release in the best-selling series will feature a huge number of improvements and enhancements over its predecessors, many of which have been designed to make the experience of managing a club more personal and customisable.

This process of personalisation begins long before a ball has been kicked – or even before the manager has accepted their first job. In the modern football world real-life managers display a variety of different management styles and, to reflect this, Football Manager 2015 now asks the prospective manager to decide on the type of manager that they want to be.

Are they going to be a ‘tracksuit manager’ who spends much of their time on the training ground dealing directly with the players, or are they going to be a ‘tactical manager’, who spends more time concentrating on tactics and player recruitment? Or perhaps they’ll opt to be a mix of the two? This innovation means that, for the first time in the series, the manager is able to be on the training ground with the players.

“Football management is a multi-faceted role nowadays and many of the new features in FM15 reflect this,” says Miles Jacobson, Director of Football Manager 15. “Whether a manager wants to be old school, or a head coach, they can now dictate this from the very start of their managerial career – and improve their skills throughout by taking virtual coaching badges.”

The ability to define a management style is just one of many improvements and enhancements in Football Manager 2015, many of which will not be instantly apparent as they occur over long-term play. One major change which will be obvious right from the start, however, is the complete redesign of the user interface – everything about Football Manager 2015 looks and feels different from before. The new interface makes everything within the world quicker to navigate and managers will find it easier to access everything they need to lead their club to success.

Something else that experienced managers will immediately notice is the improvement to the Match View, which has enjoyed its most significant facelift since the introduction of 3D in Football Manager 2009. A major part of this is the addition of cutting-edge motion capture data, which helps breathe new life into the match-day experience and takes it to that next level of realism. Created using players from AFC Wimbledon at Creative Assembly’s motion capture facility, the new motion capture data has allowed for the addition of more than 2,000 new animations, instantly making the on-pitch experience more lifelike.

In addition, the introduction of improved lighting and an overhaul of the ball physics – along with the addition of a variety of new stadium types – combine to make Football Manager 2015’s match-day experience the most realistic to date. Football Manager 2015 matches also include improved AI, new tactical player roles and instructions, new player preferred moves, touchline team talks and press interviews in the tunnel, along with a host of other innovations and enhancements.

Other elements of Football Manager 2015 which benefit from significant improvement are: