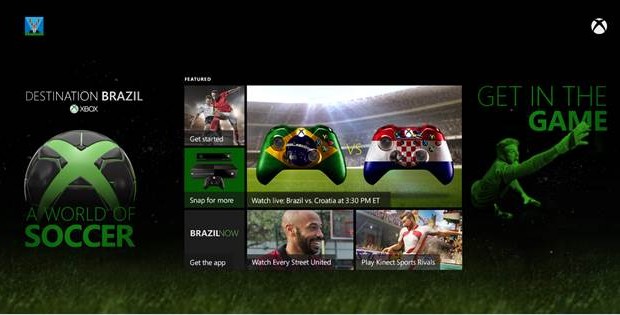 Football Fans Will Get a Kick Out of Destination Brazil

“GOOOOOAAAAALLL!” Football (or, depending on where you hail from, soccer, futbol, futebol, le foot, or footy) fans around the world are counting down the days to when they can sing that sweet cheer as they watch their favorite teams take the field in Rio de Janeiro, Brazil. On June 12, Xbox will bring fans a whole new way to enjoy the game with Destination Brazil on Xbox One. Access Destination Brazil on the Xbox One dashboard to launch Brazil Now, a new app that snaps next to live TV to enhance your match viewing experience, enable you to play “EA SPORTS™ FIFA 14 Ultimate Team: FIFA World Cup™” (EA “FIFA 14” game, sold separately, is required to play) and check out various series about your favorite football clubs from Copa90. Starting on June 15, fans can tune in to the all-new interactive reality show “Every Street United” through Destination Brazil and watch as legendary football players Thierry Henry and Edgar Davids scout the world’s most gifted, undiscovered street stars.

Brazil Now is a new app on Xbox One that brings you as close to the action in Brazil as possible without leaving your living room. You can personalise the app to your team, receive alerts and score updates for all the games, and watch the live games with real-time stats, scores and live social experiences on Xbox Live.

Brazil Now is the ultimate live football companion with the following features:

**Xbox Live Gold is required to play the online tournament

We’re also pleased to announce a partnership with Copa90 to distribute several of their series on Xbox Video – at no charge to Xbox Live members. Copa90 is already YouTube’s premier destination for football, and they have inspired a passionate global community of football fans by bringing alive the stories that go way beyond the match. Presented by a new generation, the Copa90 team doesn’t just report on football, they live it – this is the beautiful game by real fans for real fans.

Download your free bracket poster to track all your favorite teamsat MicrosoftStore.com/DestinationBrazil.

The football frenzy is just beginning, but with Destination Brazil, you’ll never miss a single kick or flag. Head over to Xbox Live and check out all of the action, beginning June 12.