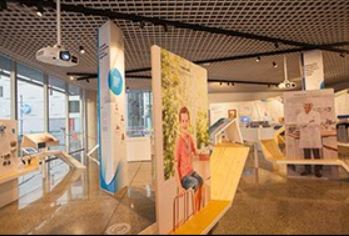 SYDNEY, 15 November 2016 – Fonterra in New Zealand is a significant organisation. In addition to their leading consumer brands and foodservice business the company operates more than 30 manufacturing sites across the country and processes about 16 billion litres of the country’s milk each year. With this in mind when Fonterra decided to centralise all of their staff into one new Auckland-based HQ two very specific audio visual requirements needed to be met and for those they turned to Epson and their EB-G6970WU multi-media projectors.

Design Engineering Manager for Automation Associates (AA) – the systems integrator on the project – Rupert Brown explained, “Previously Fonterra’s 1500 employees were spread over three separate buildings. Earlier this year the company made the decision to go with a new, more efficient, activity-based working model and centralise all of their staff into one main building. Part of this building housed a new auditorium and a new visitor’s centre and both areas had very specific AV requirements.”

The auditorium project was particularly ambitious as it was to be equipped to a high enough standard that Fonterra would no longer need to hire external venues for presentations.

As part of AA’s response to Fonterra’s brief the company’s design and installation included edge-blending the EB-G6970WU projectors across the entire background being projected upon within the auditorium.

Brown continued, “Fonterra wanted a wow factor in the auditorium so we came up with a design that integrated thirteen Epson EB-G6970WU projectors which seamlessly edge blended to give a 270-degree projection onto custom-designed motorised screens. This is incredibly impressive as it means Fonterra can now dynamically change the screen and edge blending as the room configuration changes.”

For the training, seminars, group workshops, host events and press conferences held in the Fonterra auditorium the new 270-degree projection solution raised a bar in presentation standard to a level never seen before.

To achieve this unique dynamic edge-blending 270-degree projection solution AA used the award-winning Coolux Pandoras Box media and show control system to handle the edge blending, whilst simultaneously communicating with the projectors’ via the output fed into a custom-created digital media frame.

AA also configured the auditorium so the screens could be divided down the centre which gave Fonterra the option of two separate 270-degree rooms or a larger combined 270-degree projection system.

According to Brown there were several reasons the EB-G6970WU projectors were chosen for this project, many of which revolved around quality of image, reliability and functionality.

He continued, “We chose the EB-G6970WU projectors as they have a good short throw for minimum shadow when a viewer approaches the screen and they easily enabled us to cover the 45 meters of screen we needed at an affordable price. The lens on the EB-G6970WU was also a big part of why it was selected as it allowed us to reduce the number of projectors required while still being short enough that shadows aren’t cast until close to the screen. Finally having on-board HDBaseT was a big win as it reduced the required hardware and cabling to connect the projectors.”

The visitor’s experience centre presented a different challenge according to Brown who explained, “In the visitor’s experience centre Fonterra wanted to project pre-recorded exhibits and pre-made videos with ultra-sonic sensors built into the ceiling so the projection would start as the visitor approached. What was needed here was a top quality, highly reliable and very easily integrated projector. So, based on the success of the auditorium installation, the decision was made to again go with multiple Epson EB-G6970WU projectors, all of which work perfectly with the sensors and perform brilliantly.”

For more information on the Epson EB-G6970WU projectors go to: http://www.epson.co.nz/products/projector/EB-G6970WUNL.asp