Have you ever played a game that you want to pick up, seconds after you put it down? That was me for an entire day after playing Floor Kids for the first time. I’m not sure if it was the insanely catchy dance tracks that nestled deep into my mind, or if I just wanted to watch the amazing hand-drawn animations over and over again, but even after I ran out of new stuff to do, Floor Kids wouldn’t let me leave it alone. 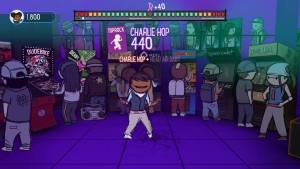 Floor Kids is a score-based, breakdancing rhythm game where the aim is to achieve the highest score possible by stringing together dance moves to the beat of a backing track. Think Tony Hawk’s Pro Skater meets a Rythym Heaven minigame. You’re awarded points based on how well you flow between moves, the variety of moves performed and the flair you put on your combos.

All of this is handled with a fairly simple, yet robust control scheme. Tapping a face button to the beat of the song performs a move, with each button corresponding to a different move. Flicking the left stick down changes you to a ‘Low rock’ stance where each face button performs a different set of moves that are performed lower to the ground, like the all-time classic wedding reception dance floor showstopper ‘the worm’, for example. Holding a face button and the stick in a direction will perform a ‘freeze’ move, and rotating the stick in a direction will perform a spinning power move. 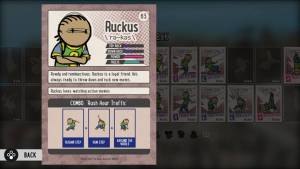 The controls may sound convoluted, but it only takes a few minutes before you start to feel as hip as your B-boy or B-girl character dancing on the screen. Each character has their own dancing strengths and weaknesses, plus their own signature combos that can be strung together for extra points. The only other gameplay mechanic is a Rhythm Heaven-esque tapping section that occurs during the chorus of every song, where you need to tap in time with on-screen prompts, followed by a bar of freestyle tapping. 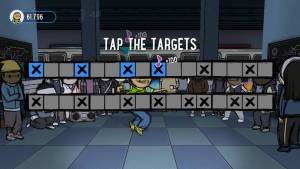 It’s a unique gameplay concept that’s not only a tonne of fun to play around with, but also completely draws you into the music in a way that only the best rhythm games are able to do. The original soundtrack has been expertly crafted by Kid Koala to create a slew of awesome tracks that perfectly suit the style and tone of the game, plus a few that burrowed into my head and haven’t left since I started playing.

The gameplay is fun and the music is great, but the thing about Floor Kids that continues to impress me is its aesthetic design. The game utilises a hand-drawn animation style for each of its characters that looks absolutely incredible in motion. It isn’t the most detailed animation, but the characters all have a unique look and dance style that makes it fun to try out each and every one of them. 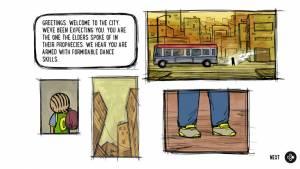 The single player campaign mode begins with you selecting a character and performing at various locations throughout the city in order to impress other dancers so that they’ll join your crew. Finishing a song with a passable score will award you a character card; collect four character cards and you unlock that dancer for your crew. Acquiring crowns also unlocks more locations and more tracks to dance to.

This single player campaign is actually the only disappointing thing about Floor Kids for me. It’s too easy and it’s too short. You can fumble your way through almost every song in the game (apart from the final area) to achieve a passable score and unlock all the characters in a little over an hour. There really isn’t any incentive to master the gameplay in order to perfect each track and reach a high score. That being said, I love the gameplay, music and art of Floor Kids so much that I played the game far beyond the point that I was unlocking anything new. Also, the final three tracks are quite difficult and actually require mastery over the score system to perfect. 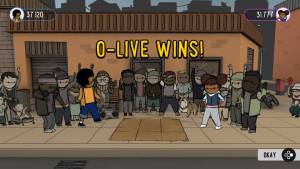 There’s a local multiplayer mode that replicates an actual dance battle, as players take turns showing off their moves and building the highest score possible. This works well on the Switch as the full control scheme maps to each Joy Con for portable, hand-cramp-inducing dance battles.

Floor kids is the type of game you just don’t want to put down. Every aspect of the game, from the fantastic animation and art design to the incredibly catchy dance tracks, has a gorgeous undeniable charm that is immediately affecting. It’s a shame that the single-player content is so thin and there’s no incentive for players to go back and ace their favourite songs, as most players will simply breeze through the game in an hour or so. For me though, Floor Kids has earned a permanent place on my Switch memory card, because you never know when the urge to bust a move might strike.