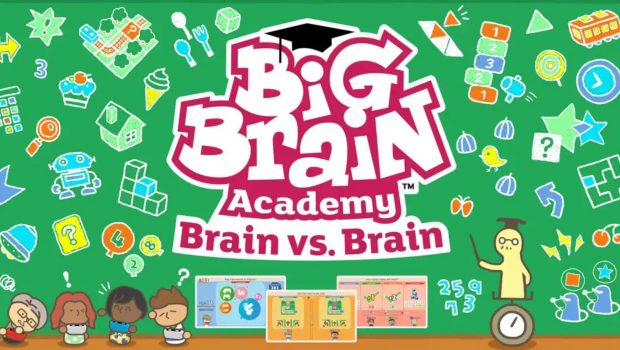 Big Brain Academy: Brain vs. Brain is coming to Nintendo Switch tomorrow, 3rd December. In this new cross-generational multiplayer* party game that anyone can play, players can take on a series of brain-bending activities that test their mental mettle. There are five different categories: Identify, Memorize, Analyze, Compute, and Visualize that offer a variety of different tasks, such as memorising a series of numbers, identifying an animal as it slowly comes into focus, or helping guide a train to its goal among many others.

Distinguished professor, Dr. Lobe, will award players with their Big Brain Brawn score based on their performance, which will in turn earn in-game coins, with which players can unlock costumes for their avatar, from a cat outfit to a corn costume!

Those who want to train before their next match can use Practice mode, where anyone can replay their favourite activities to try to earn high scores and medals. You can also go brain-to-brain with friends and family in 4-player* matches to see who gets the highest score. To see how their lobe stacks up across the globe, players can hop into Ghost Clash mode** and compete against other users’ data. Players can also compete against others on their friends list, family members who have profiles on the same Nintendo Switch console or even friendly competitors worldwide.**

Big Brain Academy: Brain vs. Brain releases on Nintendo Switch tomorrow, December 3rd. Players can take on Party mode and Stretch mode, which features a sampling of puzzles that will test their abilities in five brain-bending categories: Identify, Memorize, Analyse, Compute, and Visualize. Players can also train for their next match in Practice mode, or even compete against the world in Ghost Clash mode.